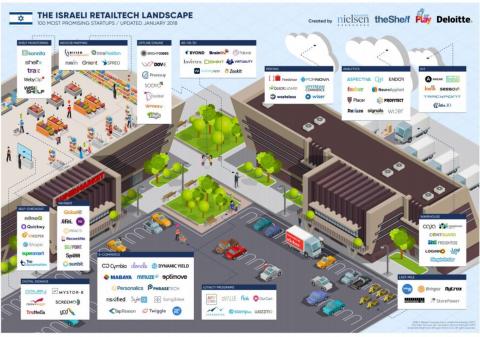 Retail-tech is booming in Israel, with 250 Israeli startups offering deep-tech solutions in just about every sector – from logistics to e-commerce to search and beyond. Four organizations dedicated to innovation –The Shelf, Nielsen Innovate, JVP Play and Deloitte – joined forces to create the first Israeli RetailTech Landscape, mapping out 100 of the most promising Israeli retail-tech startups in 14 different categories.

Notable exits so far include Retalix to NCR for $650 million, R2Net to Signet Jewelers for $325 million, Cimagine to Snap for $40 million, and Visualead to Alibaba for an undisclosed amount. Together, the companies in the landscape have raised more than $880 million, an average of almost $9 million per company. In fact, 19 of the companies have raised over $20 million and two of them (Trax and Yotpo) each raised more than $100 million.

Another 20 startups have received investments of between $5 million and $20 million, such as Syte and CommonSense Robotics, and 61 of the featured companies have raised between $100,000 and $5 million.

Global e-commerce giants Amazon, Alibaba, eBay and Sears have established R&D centers in Israel, and multinationals with innovation activities in Israel include PepsiCo, Tesco, Visa, Tyco, SAP and NCR. Other major players in international retail are coming to Israel to scout new technologies that will help keep their companies remain at the forefront.