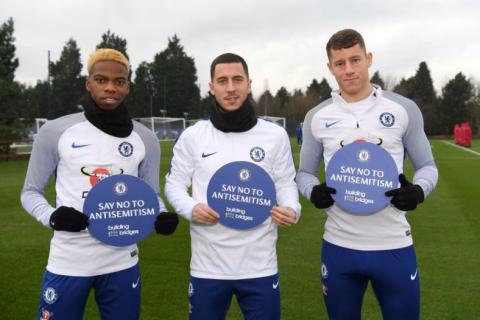 A week ahead of International Holocaust Remembrance Day, initiatives to tackle antisemitism in the UK are being unveiled in a variety of fields, from soccer fields to university campuses to Parliament. Chelsea Football Club announced Tuesday that it will launch a campaign to raise awareness among players, staff, fans and the wider community about antisemitism in soccer.

The club will officially kick off the initiative on January 31 at its Premier League game against Bournemouth, with an apparently high-profile activity that has yet to be announced. The initiative will be run as part of the Chelsea Foundation’s Building Bridges campaign, which strives to promote equality and celebrate diversity. “Everybody at Chelsea is proud to be part of a diverse club,” Chelsea FC said in a statement. “Our players, staff, fans and visitors to the club come from a wide range of backgrounds, including the Jewish community, and we want to ensure everyone feels safe, valued and included.”

The club will work together with the Holocaust Educational Trust, the Jewish Museum, the Community Security Trust, Kick It Out, the World Jewish Congress and the Anne Frank House on the campaign. Chelsea owner Roman Abramovich told the World Jewish Congress upon announcing the campaign this week: “With people around the world observing International Holocaust Memorial Day later this month, we are reminded that there is still much to be done in the fight against antisemitism. That’s why I am proud to have launched, together with Chelsea Football Club, this initiative to challenge antisemitism in all its forms.” “I am very impressed by the important work the World Jewish Congress is doing in this area and am delighted, therefore, with the partnership we have entered into to jointly raise awareness of antisemitism in sport and together making an effort to tackle it,” Abramovich added.

The campaign will include a focus on Jewish faith and culture in equality and diversity workshops run in primary schools and an education program for supporters banned for antisemitic behavior to help them to understand the impact of their actions. Participation in the course could result in a reduction in the length of their ban. Chelsea fans have frequently been accused of employing antisemitic songs, chants and gestures.

The campaign’s steering committee, led by Chelsea chairman Bruce Buck, includes prominent Jewish leaders such as president of the World Jewish Congress Ronald Lauder, vice chairman of the Conference of Presidents of Major American Jewish Organizations Malcolm Hoenlein and national director and CEO of the Anti-Defamation League Jonathan Greenblatt. Activities set to take place throughout the year will also include an exhibition at the Chelsea FC Museum and screenings of Liga Terezin – a documentary about a soccer league run from a concentration camp during the Holocaust.

The club has also invited Holocaust survivor Harry Spiro to Chelsea to share his and his family’s story. Educational visits to former concentration camps for staff, fans and stewards are also planned, similar to an initiative launched by the government to take student leaders to visit Auschwitz.

On Tuesday, Secretary of State for Communities and Local Government Sajid Javid announced that his ministry, together with the Department for Education, will establish a new strand of the Holocaust Educational Trust’s “Lessons from Auschwitz” program. The program brings students and teachers on visits to the former death camp, preceded and followed by half-day seminars. The new government initiative was proposed by the Holocaust Educational Trust and the Union of Jewish Students to tackle antisemitism, prejudice and intolerance on university campuses. The program will invite two sabbatical officers from each university to visit the death camps, and vice chancellors will also be encouraged to take part.

StandWithUs UK also tackled the issue of campus antisemitism this week, arranging an event at Parliament, hosted by the Labour Friends of Israel. MP Joan Ryan, chairwoman of Labour Friends of Israel, responded to questions about antisemitism in the Labour party and discussed the UK-Israel relationship, the Middle East conflict and BDS. Student leaders from more than 20 universities across the UK attended the event.

Later in the event, StandWithUs announced its annual campaign, in parallel with Apartheid Week, called “Peace Week UK,” which will run throughout the months of February and March. Peace Week UK seeks to foster a new dialogue between students, reform campus culture and to build bridges between student groups from different backgrounds, faiths and ideologies, while working to combat the delegitimization of Jewish and pro-Israel students in the UK.