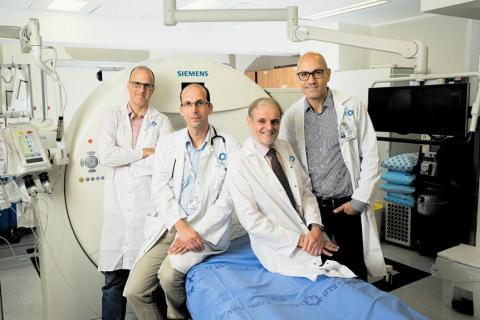 Weighing only about 1.4 kilos, the human brain is the body’s command center, controlling most of the body’s activities – processing, coordinating and integrating the information it receives from the sensory organs and sending instructions to the muscles and the rest of the body. It constitutes just 2% of body weight but uses 20% of the blood supply. It can be harmed by disease, trauma and infection, but modern medicine has found impressive ways to repair or ameliorate at least some of these conditions, especially when they are diagnosed early.

Until 10 months ago, Jerusalem – where one out of 10 Israelis live – and its metropolitan area had only one department of neurosurgery, at Hadassah University Medical Center. Having received state approval, Shaare Zedek Medical Center unveiled a new Brain Center offering invasive neurological- neurosurgical-neuroradiological procedures, including treatment of strokes. It will also soon open a 21-bed neurology department instead of treating people with neurological disorders in its internal medicine departments.

The Brain Center has performed 170 operations since it opened, as well as over 100 brain catheterizations and treatments of 1,500 stroke patients. Senior neurosurgeons from from all over the contry left to join SZMC’s new facility. As the capital’s population is both growing and aging, the two medical centers have plenty of customers. In the whole country, there are only 12 specialist physicians qualified to perform brain catheterizations.

SZMC’s location, at the Light Rail’s Yefe Nof station, is much more centrally situated than Hadassah in Ein Kerem. Time is of the essence for stroke victims, as each minute, 1.9 million neurons, 14 billion synapses and 12 kilometers of myelinated fibers are destroyed. SZMC director-general Prof. Jonathan Halevy said at the Shishi Bari (Healthy Friday) public conference on the brain nine days ago that people with symptoms of stroke should call for an ambulance and be rushed to the nearest hospital that has a stroke unit.

A few days after the neurosurgery department opened at SZMC, its doctors saved the life of Rabbi Adin Steinsaltz, the outstanding Israeli teacher, philosopher, social critic and spiritual mentor, who according to press reports suffered a stroke and was treated in time. SOME 400 people crowded into Shaare Zedek’s Steinberg auditorium to attend the free high-level event, where all of its neurosurgeons and its chief of neurology lectured and answered questions for nearly three hours. Over 100 people had to be turned away or refused registration for lack of space, but the deliberations will soon be put up on the hospital’s website via YouTube. “The brain is an amazing organ,” said Prof. Natan Bornstein, head of the center, who came from Tel Aviv Sourasky Medical Center and is deputy president of the Israel Stroke Society and president of the World Stroke Society. In 1987, after a three-year stroke fellowship in Toronto, he established Israel’s first stroke unit in Tel Aviv and directed it before moving to SZMC. “We still don’t know everything about the brain,” he continued. “There have been huge breakthroughs since I studied medicine.

Here, we have set up a model unique to Israel in which all various fields connected to the neurological system are available on one floor. We can deal with all maladies of the brain, spinal cord and peripheral nerves,” said Bornstein. Unlike circuits in an electrical system, the parts of the central nervous system are connected by chemical factors. A healthy brain needs full synchronization between the two hemispheres, which communicate with each other in a very sophisticated way.”

The most important thing is prevention, he continued, “The brain is our future, and we each have to preserve its health. In pregnancy, the fetal brain can already be affected physically, cognitively and emotionally.” To prevent damage to the central nervous system and preserve brain health, one must eat right; exercise regularly; maintain the proper body weight, blood fats, sugar and blood pressure; and never smoke (“even one cigarette a day is too much”). The Mediterranean diet is the most healthful, with its fruits and vegetables, olive oil, fish, pulses and whole grains, “but even though we are in the Mediterranean, too few Israelis observe it,” Bornstein said.

DR. NEVO Margalit, a neurosurgeon who was head of the skull base surgery service at Ichilov before coming to SZMC, is now head of its neurosurgery department. “We deal with damage to brain from head trauma, tumors [both benign and malignant, primary and secondary], adults and children, vascular neurosurgery, the spinal cord, trigeminal neuralgia [severe head and face pain] and hemifascial spasms [irregular muscle contractions on one side of the face],” he said. “Besides open operations, we also do them by endoscope through the nose. Up to four doctors can use implements simultaneously through the nasal cavity to the brain.”

There is a rise in the number of brain tumors, said Margalit. “We don’t know exactly why. We can detect more with CT and MRI imaging, but it seems there actually are more in recent years. Not all tumors have to be removed. Some that remain static can be left alone and observed over time.” Although they affect the membranes covering the brain and not the brain itself, meningiomas – tumors that arise from the meninges – are also a major problem. The most common type of tumor in the head, they may compress or squeeze the nerves, vessels and brain. Most meningiomas, Margalit continued, grow very slowly, often over many years without causing symptoms, but sometimes, they may cause serious disability.

They occur more in older women than in older men, but they can be diagnosed in both sexes and at any age. “Most can be removed and the patient cured; sometimes we can’t remove all of it, so we eliminate some of it and then do radiation.” He recalled a number of cases, including a 24-year-old tourist who was treated and returned to full function.

DR. TAL Shahar, who specializes in oncological neurosurgery, noted that fortunately, two-thirds of brain tumors are benign and the rest malignant. Growths called glioblastomas are very aggressive and can’t be diagnosed at an early stage. “They are very heterogeneous and different in each person. We use functional MRI imaging to determine what part of the brain is affected.” In many cases, the patient is awake during surgery, as the brain itself does not feel pain during cutting. An electrophysiologists talks to them and perform tests during the operation to ensure that their brain function remains unaffected.

A neurophysiologist shows pictures to the patient to make sure that he can identify them and speak. Three days later, the patient can go home. ORIGINALLY TRAINED at the Elvis Presley Memorial Trauma Center in Memphis, Tennessee, Dr. John Winestone made aliya and joined SZMC in 2015. Speaking good Hebrew with an American accent, Winestone specializes in spinal cord surgery. He deals with herniated discs that put pressure on nerves, scoliosis, trauma, fractures, infections and damage to the spinal cord, which has the width of a pinkie. In the last 30 years, the results of operations have become much more successful.

He introduced at SZMC minimally invasive surgery that creates only a small incision, less radiation and faster recovery, usually using computerized navigation to make the operation more exact. Winestone functions in full cooperation with the spine unit headed by Dr. Yair Barzilai; the patients benefit from both the combined orthopedic/neursurgery approach. ANEURYSMS, WHICH are localized, bloodfilled balloon-like bulges in the wall of a blood vessel, keep Dr. Yaakov Amsalem – a radiation neurosurgeon – busy. He also treats spinal and vascular malformations and tumors. Autopsy studies show that 1% to 5% of adults who died have aneurysms, but most cause no harm during their lifetimes.

They are more common in women, but ruptures can be found in both genders and are precipitated by smoking, older age, hypertension, narcotic or alcohol abuse or diseases of the connective tissue. When a CT or MRI scan is performed, “you can see a balloon in the brain,” says Amsalem. They are usually treated with a microcatheter pushed into an artery in the groin to the brain. We use thin platinum coils to close the aneurysm and sometimes a stent to support the tissue.”

STROKES ARE what Dr. Roni Eichel specializes in. “I want you all in the audience to be our ambassadors to fight strokes, of which there are 15,000 cases in Israel each year,” he said. There are ischemic strokes, in which a clot prevents oxygen-rich blood and sugar from reaching the brain tissue, and hemorrhagic strokes, in which bleeding causes damage. The first type is easier to treat. Every minute counts to save brain cells from death. Since stroke doesn’t really cause pain, many people don’t call for help and fail to reach a hospital stroke unit by ambulance in time.

“Tell your friends and relatives the signs of stroke; we use the acronym FAST – facial weakness, arm weakness, speech difficult = time to act fast. Victims may suffer sudden numbness of an arm or leg, have difficulty understanding, feel dizzy with loss of balance, have difficulty swallowing or lose their sight suddenly. As many Jerusalemites – Arabs and ultra-Orthodox Jews – don’t have access to Hebrew-language TV, they have not seen public service announcements on FAST. “So we’ve produced comic books in Hebrew and Arabic for them,” Eichel said.

A stroke expert is on duty at all times at SZMC, and the ambulance staffs inform the hospital even before the patient arrives so it can be ready to perform a CT and accelerate treatment by injecting clot-busting tissue plasminogen activator to melt the clot. “We have even successfully treated patients as old as 95. Failure to treat strokes on time can result in death or severe disability. In the last 1.5 years, SZMC has treated over 1,500 stroke patients – 1,000 of them with the ischemic type.

CONCLUDING THE conference wasProf. Isabelle Korn Lubetzki, the prospective head of SZMC’s soon-to-be-opened neurology department, described a number of interesting cases she and her staff have treated. They included infections, cluster headaches, epilepsy, Parkinson’s, dementia and more. “Dementia does not always mean Alzheimer’s,” she said. “Sometimes it is a deficiency in Vitamin B12, especially when it involves vegetarians. We in neurology must always be alert.”