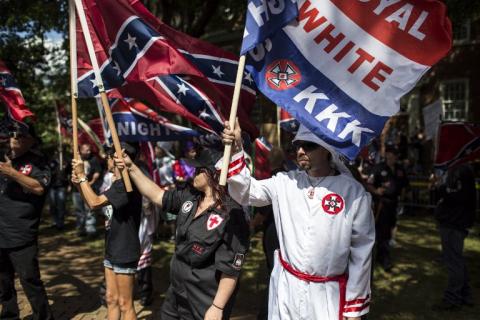 “Are Jews white?” is a question that began fading from my mind 40 years ago, when I left America. In my neighborhood of Jerusalem, as in the rest of Israel, Jews comes in all shades—from blonde to black. The conflict between Jews and Palestinians isn't about race. Nor are the tensions between Jews from Europe and those from the Muslim world—though activists and academics sometimes import the terms “black” and “white,” in defiance of their lying eyes.

Since Donald Trump's ascent, though, the issue of Jews and whiteness pops up increasingly in the links shared by friends in the United States. Since Charlottesville, the question of Jews' color has become a near-daily side dish on my news platter. This bothers me. With the humility of an emigre—someone both outside and inside American culture—I suggest that discussing reborn American anti-Semitism in terms of color and race is mistaken, misleading, and pernicious. I understand why the question gets asked. Color, or race, is the fundamental divide in America, and has been since the first African slaves were sold in Jamestown in 1619. Until the Civil War, race determined whether you could be enslaved. Afterward, it still determined which fundamental rights you could be denied. Erased from law books as a pretext for discrimination, it still affects the odds of what will happen to you if you are stopped by a cop.

Trump's rise, starting from the lie about Barack Obama's birthplace, is built on the horror felt by a significant portion of Americans at the idea that an African American could legitimately be president of the United States. Because race is the most pervasive reason that some Americans believe they can discriminate against and despise others, a reflexive response to hatred of Jews is to try to fit it into the categories of race. The syllogism seems to be: People who are hated are not considered white; therefore, if Jews are hated, they aren't really white. Alternatively, if they are white, the hatred is insignificant.

The reflex is understandable. But it's also lazy and—when viewed from offshore—provincial. Human beings have come up with so many excuses to distinguish between the acceptable us and the hated them. Along with Shakespeare, Plato, and gunpowder, despising Jews is part of the inheritance that Europe bequeathed to America. Historically, Europe's explicit reason for hating and periodically murdering Jews was religion—obstinately or demonically, Jews wouldn't accept the obvious truth of Christianity. Less explicit was what we today call ethnicity: Jews often spoke a different language. Their culture was different, and they considered themselves a separate nationality.

In the United States when my parents were young, they still faced quotas for Jews at universities and Father Coughlin's pro-Nazi rants on the radio. By the time I grew up, anti-Semitism seemed like a faded stain on the social fabric. It existed, but without much energy—if only because America's energy for hatred was taken up with race.

Okay, this was naive. Even in America, it turns out, not all bigotry is about race, and anti-Semitism hasn't faded away. What's more offensive about discussing Jews and whiteness is that, however unintentionally, it echoes the racial anti-Semitism of the Nazis. In Europe in the age of Emancipation, the deal that liberals offered Jews was equality in return for shedding their ethnic characteristics and remaining Jews in religion only. Jews who discovered that this wasn't enough to buy them equality often accepted what German Jewish poet Heinrich Heine called “the ticket of admission into European culture”—conversion to Christianity.

The race theorists of anti-Semitism didn't want to allow their demons any exit, and redefined Jewishness as a biological evil. The pseudo-science of racial hierarchies designed to justify colonialism eventually provided the rationale for the Holocaust. So white supremacists don't consider us white. As far as I'm concerned, the proper response is not to explore whether we are or aren't, but to reject the question. By here, some readers are waving their hands to tell me that the actual question isn't whether Jews are white, but whether they enjoy white privilege in America. Jews live in well-off neighborhoods, have high educational levels and don't have to fear that a traffic stop will become a death sentence.

In broad strokes this is true. But it turns out that privilege and lack of it are insufficient tools for mapping who is the object of potentially violent hatred. As British Labor MP Naz Shah wrote last year in an eloquent apology for anti-Semitic comments she'd made in the past, My understanding of anti-Semitism was lacking. I didn't get it. I don't believe in hierarchies of oppression but I’d never before understood that anti-Semitism is different—and perhaps more dangerous—than other forms of discrimination, because instead of painting the victim as inferior, anti-Semitism paints the victim as, in a way, superior and controlling.

For anti-Semites, any economic or political achievements by Jews are proof of the thesis of the Protocols of the Elders of Zion: The cabal is succeeding in its designs of domination; they are powerful; they are replacing us. This doesn't mean that anti-Semitism is the most virulent or widespread form of hatred in America—only that it's real. It's not tied to color. It puts Jews on the same side as others threatened by resurgent hatred, and by a president who is a willing shill for the haters.