Why Are You So Smart? 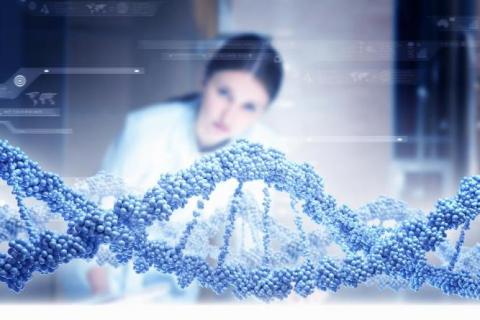 Looking around our planet today, it’s hard not to be struck by humanity’s uniqueness. We are the only species around that writes books, runs experiments, and builds skyscrapers.

Our intelligence must have also been useful when we were evolving—presumably it helped us to be better hunters and avoid being hunted ourselves, for instance. Perhaps even more importantly, our growing intelligence enabled early humans to compete with each other: We evolved to be intelligent to keep up with everybody else evolving to be intelligent. Smarter people are more attractive to others, and are better at jockeying for status within complex social groups. It is well-known that humans underwent an intelligence arms race that resulted in a rapid growth in cognitive ability. What is less well-known is how the need for women to be able to walk and run helped this boom in smarts.

A lot of our growth in intelligence is due to an increase in brain size. Even when looking at the differences between one person and another, brain size accounts for 16% of the variance in intelligence. A bigger brain might have been the simplest way to make us smarter. As brain sizes grew, so did the pelvises of the women who had to give birth to all of these big-headed babies.

The problem was that there was another evolutionary pattern at work—walking on two legs. This may have happened for a variety of reasons, and like most theories based on hypothetical survival advantages, this one is debated. But it is clear that walking upright requires smaller pelvises. So there were two evolutionary pressures in opposite directions. An uneasy balance was struck, where women can walk and run yet can also give birth to babies with relatively big heads. If women’s pelvises were any bigger, they would not be able to walk and run well.1 A cost of this balance was safety. Childbirth is more dangerous for humans than for any other primate,2 probably for this reason. (The fact that so many women die in childbirth outside the context of modern medicine is a sign of how important intelligence is for our species.)

This is the kind of impasse that encourages innovations that might be considered “creative,” or at least as creative as an evolutionary process without explicit goals, without a guiding intelligence, can be. Evolution found some important mechanical tricks to get around this constraint: Babies’ skulls are made of pieces that shift during birth, women’s pelvises temporarily separate during delivery, andthe space for the brain increases dramatically in infancy. But another key adaptation was in how the brain itself worked. Evolution made human beings learn what they need about the world, rather than having it inborn.

A baby bird can start walking around a looking for food moments after hatching; young horses can run when they’re a few hours old. Human beings, on the other hand, need years to be self-sufficient. Traditionally, this intense parental investment lasts until puberty, but in the modern age can extend until the child is leaving graduate school at 33 (or maybe that was just me). This is, in part, because our brains are not fully developed until we’re adults.3 As Richerson and Boyd put it, “We are the largest brained, slowest developing member of the largest brained, slowest developing mammalian order.”4 We are born not knowing much, but with an incredible ability to learn. If people get smartafter birth, the brain can be smaller at birth, effectively making a workaround for the pelvis-size constraint. The brain then grows dramatically after a baby is born.

Rather than being made perfect right out the gate, we can adapt to almost anything the world presents to us. One effect of this is that babies born in an incredible variety of environments are able to learn to live there, from the Kalahari desert to the Arctic. If we were more competent at birth, orprecocial, we’d be limited to a much smaller range of environments. Furthermore, our environment is technological—we fill our world with culture and technology that kids take for granted and then build on themselves as adults, resulting in a positive feedback loop. This would not be possible without the long learning phase that humans have.

If we’d stayed on all fours, women’s pelvises could have remained bigger. Without the pelvis limiting brain size, our intelligence might have had more built-in, “brittle” smarts, specific to a particular environment, but less fluid intelligence. But as it turned out, we are as smart as we are, in part, because of some more humdrum biomechanical demands. Like in many creative situations, a constraint lead to a productive workaround.

Paradoxically, our utter inability to care for ourselves as babies is a key to the genius of our species.