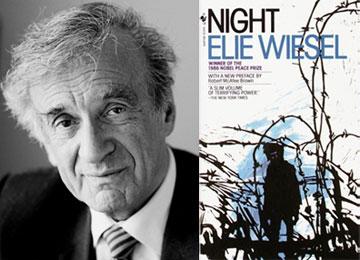 Nearly five months after the death of Holocaust survivor and Nobel laureate Elie Wiesel, historian Joel Rappel last week presented an unpublished chapter from the author’s best-known work, “Night.” In it, Wiesel describes a date in a Paris nightclub with a French university student named Cateline in or around 1955, a decade after the Holocaust ended. Wiesel, who was about 27 at the time, survived Auschwitz and Buchenwald, and lost his parents and sister in the Holocaust. During the date, he revealed to Cateline his emotional distress and inability to stop thinking about death. Rappel found the chapter – which was originally written in French – several years ago in Boston University’s Elie Wiesel Archive, which he founded and managed.

But it was only after Wiesel’s death, on July 2, that he decided to reveal it to researchers and the reading public. He did so at a conference in Wiesel’s memory at Tel Aviv University’s Cymbalista Jewish Heritage Center. The text was filed in the archive under the title “Chapter 0.” “It was planned as the opening chapter of ‘Night’ but was set aside,” Rappel told Haaretz. Rappel discovered that Dov Yudkowsky, editor of Israel’s Yedioth Ahronoth daily – Wiesel’s professional and literary home at the time – was behind the decision. According to Rappel, Yudkowsky thought that the chapter will fragment the book and therefore should be scrapped.

The historian read through the extensive correspondence between the young journalist and the legendary newspaper editor. Rappel says Wiesel later thanked Yudkowsky for his suggestion. “Night” was Wiesel’s best-known book. It was first published in 1956, in Yiddish, as “Un di velt hot geshvign” (“And the World Remained Silent”). It went on to be translated into at least 35 languages, a best-seller that is mandatory reading in schools worldwide. The book depicts the author’s own experiences as a teenager in the Holocaust, struggling with existential questions and issues of faith and identity.

Later, though, he regrets what he told her: “I had no right to impose on her my past, my experience and my death. I am free to no longer believe in life itself and in the living ... but I have no right to say, to transfer all these thoughts to others.” He goes on to promise her “not to think anymore about the past, but only of the future,” and explains: “It’s more important that I know what is happening to me than what happened to me.”

The two also talk about love. When Cateline asks Wiesel if he ever loved anyone before, he tells her about the family he lost in the Holocaust. “Yes Cateline. I loved. I loved too much. I loved my father, my mother, my sisters, my teachers in school, my friends, the neighbor’s horse, the sky above the city, the smiles of the children, and the children who did not smile. Yes, little Parisienne, I loved them all.” To her question of whether he had ever been in love, Wiesel answers in the negative. “Have I ever been in love? No, Cateline. I didn’t have time. And afterward I was not capable of it. I could no longer believe in love. I think that human beings are not deserving of it. Perhaps they are deserving of being loved, but not of loving.”

He goes on to tell her about his emotional pain, his awakening as a result of the Holocaust and his loss of faith. “Life robbed me of everything and gave me nothing in return. First of all, it robbed me of those most precious to me. Then my friends. My childhood. My dreams. My illusions. And nothing in return! Not a new religion, not a God to depend on, not hope and not the power to hope. Memories and the dead. Disgust and shame,” he tells her. He later adds: “In the beginning was belief, foolish belief, and faith, empty faith, and illusion, the terrible illusion. … We believed in God, had faith in man, and lived with the illusion that in each one of us is a sacred spark from the fire of the Shechinah, that each one carried in his eyes and in his soul the sign of God. This was the source – if not the cause – of all our misfortune.”

In the course of his research, Rappel discovered that “Night” had five different versions, written between 1947 and 1964. The most famous of them was the version in French, first published in 1958. It was the basis for all further translations. In April, Rappel disclosed the existence of the archived Hebrew version, in Wiesel’s own handwriting, which is different from the published version. In addition to “Chapter 0,” Rappel found an additional unpublished chapter, which was written as the book’s conclusion. This chapter appears only in the 1956 Yiddish version, and Wiesel removed it from subsequent editions.

Unlike “Chapter 0,” however, this chapter did not remain concealed from the public. In 1985, Wiesel published it in “Against Silence: The Voice and Vision of Elie Wiesel.” But according to Rappel, the wider public – especially Wiesel’s Hebrew readers – do not know about this excised chapter. In this chapter, titled “The End and the Beginning,” Wiesel rails against life and his own faith in God, and describes his final moments in Buchenwald and its liberation. “I was already an old man, combining the disaffection of Kohelet [the biblical Ecclesiastes] with the tragic reflections of Job. ... I became a stone, a hard cold stone. For whom? For my father? My mother? For myself? My childish illusions? For my religious hopes? Maybe for all of them,” Wiesel writes.

He goes on to inveigh against the human condition. “Dreams of truth, of freedom are false dreams for men. Visions of justice and equality are false visions for men. Man is: the struggle for bread, for meat; man is: the struggle to satisfy one’s own instincts. Man is instinct to the core. Flesh to the core. And not heart. And not spirit. And not morality. I learned that in Buchenwald. And what one learns in such conditions is without a doubt the truth, the purest truth. For man can really know man only in extreme conditions, when he has thrown away from himself all masks, social and psychological, and appears before us naked, as he is in truth. In Buchenwald I saw the true face of man. The face of a human animal, which is worse than a true animal. O God, woe is you, woe is man, how trifling and puny. Ought you to even exist, if the son of Adam was made in your image! God ... I had ceased to believe in his existence. But despite that, I continued to believe in his evil.”

Wiesel is also scathingly critical of the world, for forgetting the Holocaust and its lessons so quickly. “Now, 10 years after Buchenwald, I see that the world forgets. Germany is a sovereign nation and its army has been resurrected from the dead. Ilse Koch, the mean, sadistic woman of Buchenwald, has children and is happy. War criminals walk around in the streets of Hamburg and Munich. The past is being wiped out, forgotten. Germans and anti-Semites say that the story of the six million martyrs is only a legend, and the naive world will probably believe them, if not today then tomorrow or the day after tomorrow.”