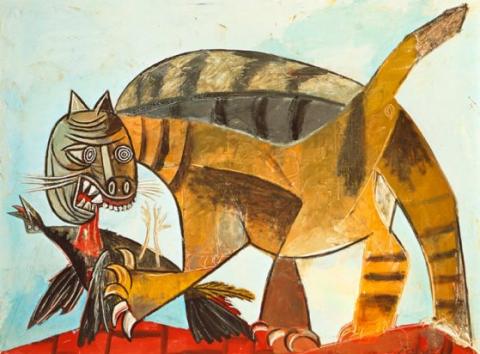 For the first time ever in this country a neo-Nazi group is to be banned. Using the 2000 Terrorism Act, the Home Secretary Amber Rudd said: "National Action is a racist, antisemitic and homophobic organisation which stirs up hatred, glorifies violence and promotes a vile ideology, and I will not stand for it."

Perhaps because some think it is necessary to wage a new war against fascism. Partly perhaps of the murder of Jo Cox, the Labour MP shot by a man with links to far-right organisations and an apparent fascination with the Nazis and white supremacism. Maybe because of a rise in antisemitism. But National Action is simply the latest in a long line of very similar groups who have held this view.

Also on the increase, are assaults on people who are identified by their attackers as not British: probably partly due the public being more willing to report alleged offences and the improved logging of hate crimes by police. So one reason for the ban could be the determination to make it clear that while Brexit may be red, white and blue it is not red, and white with a big black swastika in the middle of it.

The claim that the Brexit vote has unleashed the forces of extreme nationalism has mainly been made by enthusiastic "remainers". But it isn't unreasonable to think the government and others backing Brexit might want to underscore the argument that wanting to leave the European Union does not legitimise hatred for the alien.

Of course there's a broader context. Thuggish young men with shaven heads and a taste for Nazi regalia are, of course, a huge problem for those they assault. But such movements are not the face of the great upheaval we've seen in 2016. But Trump has been called a fascist. UKIP has been called fascist. On the continent, parties in Austria, Hungary, the Netherlands, Germany and France have all been called fascist. Some of those do indeed have deep roots in older movements. It is an easy insult, a broad brush tarring them with the legacy of one of the worst political crimes in history, Hitler's systematic murder of the Jews. But it is worth reflecting what fascism was and wasn't, is and isn't.

As ever, it is just a word. Some of the heated debate relies on the Platonic notion that somewhere in the sky there's a package which when unwrapped will reveal what "fascist" really means. There isn't. So we are arguing about how we want to define stuff that has happened, looking for threads, commonalities and discontinuities. The fasces - the Roman bundle of flogging sticks bound around an executioner's axe, symbolising authority and unity - became the name and the symbol of a movement which swept Europe in the 1920s and 1930s.

Mussolini's fascist party came to power in Italy in 1922. Franco ruled Spain for 36 years, until the mid-1970s. Incidentally, Spain is one of the few countries in Europe that doesn't have a modern far-right party of any influence. And Italy's fascist heirs, the MSI, merged into the mainstream in 1995. In the UK, Oswald Mosley's British Union of Fascists, often the focus of violent controversy, made little electoral headway before it was banned - and more than 700 of its members interned - in 1940, a year into World War Two, for alleged pro-Nazi sympathies. So does the new hard right have roots in the 1930s?

When you hear the world "Nazi" or "fascist" it's likely that what pops into you head is an image of a phalanx of goose-stepping men in military-style uniforms, a screaming Fuehrer, banners and flags. You don't see that these days. Fascism was a brotherhood born out of the trenches, a belief in the honesty of military virtues over wily, tricky politicians. Now, none of the new groups on the populist right believe in military conquest: expanding territory in a thirst for glory and living space. Rather the reverse.

There was a glorification of violence, speed and movement. Most of the new far-right try hard to distance themselves from this, with varying success. Central to all fascist groups was a hatred of communism and a desire to beat it on the streets, smashing working-class organisations in the process. Neo-liberalism has already done the job. It's not much of a problem these days, when even the communists are capitalists.

Now to the overriding fear. Let's remember that, while antisemitism was the central driver of Nazism, racism was incidental to most fascists. Antisemitism was also central to French groups but wasn't a main force behind Mussolini or Franco's fascism.

I once asked the French Front National's founder Jean-Marie Len Pen, father of Marine, if he was a fascist. He replied "that was a movement in 20th Century Italy" - by implication, of little relevance to 21st Century France. He has a point, of sorts. But is there a mindset that gives rise to a right wing radicalism?
The concerns of the new far-right are immigration and globalisation - a force which didn't really concern the 1930s. A core belief is often opposition to Islam, and connecting the dots between that religion in general with its most radical, violent, manifestations. Often they make a harsh distinction between Islam and Western or European values.

Here, there is a dislike of the EU and the euro: in the United States a distaste for multinational organisations. Some groups are socially liberal on issues like homosexuality and feminism: indeed the Dutch Freedom party makes this a mainstay of its assault on Islam. Others, like the ruling Polish Law and Justice party and many Trump supporters, do echo more traditional concerns with "degeneracy".

What the new groups and the old ones have in common is an overriding concern with identity, and how it relates to blood and soil, a scorn for "politics as normal" and the failures of an elite. That is not to dismiss their concerns about immigration, globalisation or the European Union. But it is important. They emerge centre stage when there is a grim economic backdrop and, for very different reasons, an insecurity about the future direction of the world.

There's an admiration for strong leaders, and a feeling they alone can express the will of the people. Indeed, it is the force of the leader's own will which triumphs over the compromises common to lesser politicians. Whether you like or dislike what has happened this year, the sensitivities about ethnic and national identity are as raw now as they were in the 1930s. It is in part about security in an insecure world. Understanding these complex historical currents may be more useful than flinging insults. It might even be more productive than banning groups, however odious.