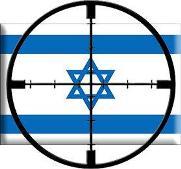 WHEN AN Arab al-Qaeda sympathizer is guilty of shooting three Jewish children and an adult in Toulouse, after killing three non-white French soldiers nearby, he caused not only extreme grief to their families, but also extreme harm to the Palestinian people, whose cause he claims to support. The world-wide shock found its expression in a demonstration of solidarity with the French Jewish community, and indirectly with the State of Israel.
The French foreign minister flew to Jerusalem, where the Jewish victims were buried. President Nicolas Sarkozy, in the middle of the fight for his political life, appeared everywhere where an ounce of political capital could be extracted from the tragedy. So, even more shamelessly, did Binyamin Netanyahu. Just when calls for boycotting Israel were heard in many places, this act reminded the world of the ravages of anti-Semitism. One had to be very brave to demand the boycott of the “Jewish State” at such a time. It is easy for advocates of Israel to recall the Nazi battle-cry “Kauft nicht bei Juden!” (“Don’t buy from Jews”).

Lately, Netanyahu has been mentioning the Holocaust in every speech he makes in which he calls for an attack on Iran. He prophesies a Second Holocaust if Iran’s nuclear installations are not bombed to smithereens. This has been criticized inside Israel as cynical exploitation of the Holocaust, but in the atmosphere created by the Toulouse outrage this criticism has been muted.

SOME MAY think that these responses are overreactions. After all, the outrage was committed by a single 24-year old deranged individual. The victims were not only Jews, but also Muslims. Has this act not been blown out of proportion?

Those who say so do not understand the background of the Jewish reaction.

Yeshayahu Leibowitz, an observant Jew, said years ago that the Jewish religion had practically died 200 years ago, and that the only thing that unites all Jews now is the Holocaust. There is much truth in this, but the Holocaust must be understood in this context as the culmination of centuries of persecution.

Almost every Jewish child around the world is brought up on the narrative of Jewish victimhood. “In every generation, they stand up to annihilate us,” says the sacred text that will be read in every Jewish home around the world in two weeks on Passover eve, “They”, as is well understood, are the “goyim”, all goyim.

Jews, according to our generally accepted narrative, have been persecuted everywhere, all the time, with few exceptions. Jews had to be ready to be attacked in every place at any moment. It is a continuous story of massacres, mass expulsions, the butchery of the Crusaders, the Spanish inquisition, the Russian and Ukrainian pogroms. The Holocaust was only one link in that chain, and probably not the last one.

In Jewish historiography, the story of victimhood doesn’t even start with European Christian Jew-hatred, but goes back to the (mythical) story of Israelite slavery in Egypt, the destruction of the Temple in Jerusalem by the Babylonians and again by the Romans. A few weeks ago the jolly feast of Purim was celebrated, in memory of the Biblical (and mythical) story of the plan to annihilate all Jews in Persia, today’s Iran, which was foiled by a pretty and unscrupulous young woman named Esther. (In the end, it was the Jews who killed all their enemies, women and children included.)

What the assassin of Toulouse has succeeded in doing by his disgusting act is to bind French – and world – Jewry even tighter to the State of Israel. Already these ties have become very close in the last few years. A large proportion of French Jews are immigrants from North Africa who chose to go to France instead of Israel, and are therefore fiercer Israeli nationalists then most Israelis. They invest money and buy houses in Israel. In the month of August, one hears more French than Hebrew on Tel Aviv’s sea shore. Now many of them may decide to come to Israel for good. Like every anti-Semitic act, this one in Toulouse contributes to the strength of Israel, and especially to the strength of the Israeli anti-Arab right.

I BELIEVE that the Palestinian Prime Minister, Salam Fayad, was quite sincere when he condemned the outrage, and especially the declaration attributed to the assassin, that he wanted to avenge the death of children in Gaza. No one should utter the name of Palestine when carrying out such a dastardly act, he said. I was reminded of my late friend, Issam Sartawi, the Palestinian “terrorist” who became an outstanding peace activist and was murdered for it. He once told me that a French anti-Semitic leader came to his office in Paris and offered an alliance. “I threw him out,” he told me, “I know that the anti-Semites are the greatest enemies of the Palestinian people”

As has been pointed out many times, modern Zionism is the step-daughter of modern European anti-Semitism. Indeed, the name “Zionism” was invented only a few years after the term “anti-Semitism” was coined by a German ideologue. Without anti-Semitism, which engulfed Europe from the “Black Hundreds” in Czarist Russia to the Dreyfus affair in republican France, Jews would have yearned for Zion comfortably for another 2000 years. It was anti-Semitism, with the threat of dreadful things to come, that drove them out and lent credibility to the idea that Jews must have a state of their own, where they would be masters of their own fate.

The original Zionists did not intend to build a state that would be a kind of General Staff for World Jewry. Indeed, they thought that there would be no World Jewry. In their vision, all the Jews would congregate in Palestine, and the Jewish Diaspora would disappear. That’s what Theodor Herzl wrote, and that’s what David Ben-Gurion and Vladimir Jabotinsky believed. If they had had their way, there would have been no anti-Semitic murders in Toulouse, because there would have been no Jews in Toulouse.

Ben Gurion was narrowly restrained from telling American Jewish Zionists what he thought of them. He held them in utter contempt. A Zionist, he believed, had no business to be anywhere but in Zion. If he had listened to Binyamin Netanyahu sucking up to the thousands of Jewish “leaders” in the AIPAC conference, he would have thrown up. And understandably, because these Jews, who were clapping and jumping up and down like mad, egging Netanyahu on to start a disastrous war against Iran, then went back to their comfortable homes and lucrative occupations in America.

Their English-speaking children attend colleges and dream about future riches while their contemporaries in Israel go to the army and worry about what would happen to their defenseless families if the promised war with Iran really comes about. How not to vomit?

BY THE way, the symbiosis between American politicians and the Zionist lobby produced another weird curiosity this week. The US Congress unanimously adopted a law that makes it easy for Israelis to immigrate to the US for good. All we have to do now is to buy a small business in America – say a little delicatessen shop in a corner of Brooklyn, for half the price of an apartment in Jerusalem – to automatically become American residents, and eventually citizens. Can one imagine a more anti-Zionist act than this plot to empty Israel? All out of love for Israel and Jewish votes? The Israeli media applauded, of course, this astounding new evidence of American friendship for Israel. So here we have a murderous anti-Semite in Toulouse driving the Jews towards Israel, and a cravenly Zionist US Congress enticing the Israelis back into “exile”.

WHEN ISRAEL was founded, we thought that that was the end of Jewish victimhood, and especially of the mentality of Jewish victimhood. Here we were, Hebrews of a new kind, able to defend ourselves, with all the strength of a sovereign state. Cry-baby victimhood belonged to the despised and detested Diaspora, to the dispersed and defenseless Jewish communities. But victimhood has come back with a vengeance, both as an all-purpose political ploy and as a mental attitude. The Iranian nukes, real or imagined, give it a big boost. As long as Israel is in a state of fear, the Second Holocaust mentality will not loosen its grip.

From day to day, Israel becomes more Jewish and less Israeli. As has been said, it is easier to get the Jews out of the ghetto than to get the ghetto out of the Jews. Especially in a permanent war. So in the end we come to the same conclusion as in all other matters: Peace is the Answer.