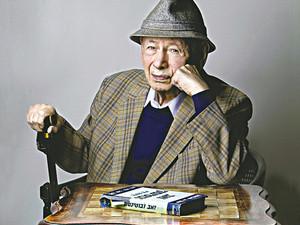 The Israeli historian Benzion Netanyahu, who has died aged 102, was an uncompromising Zionist best known for the profound influence he had over his son Binyamin, the country's prime minister. Benzion insisted on the need for eternal vigilance in defence of Jewish rights, as he saw them, and critics blamed him for dissuading Binyamin from making peace with Palestinians. Many saw in the son's approach to Iran a reflection of his father's bleak world view.
Yet their mutual admiration was evident. During Binyamin's successful 2009 election campaign, a television ad of the two playing chess had him saying to camera after a move by his father: "You need the steadfastness to act, to do the unpopular thing that may ultimately save the country."
Benzion's involvement in controversy started when he broke off a promising academic career in mandate-era Palestine to become chief aide and secretary to Vladimir Zeev Jabotinsky, the leader of the rightwing Revisionist strain of Zionism, precursor to the now-ruling Likud party. Jabotinsky withdrew from the mainstream Zionist organisation in 1931, angry at Britain's perceived reneging on its promise to Jews as framed in the 1917 Balfour declaration. Jabotinsky and his protege, Netanyahu, also resented the socialist outlook of the Labour Zionists, led by Israel's future first prime minister, David Ben-Gurion, who increasingly came to dominate Jewish politics in pre-independence Palestine.

Netanyahu believed in Jewish rights to settle both banks of the River Jordan, in maintaining an "iron wall" until Arabs recognised the permanence of a Jewish presence, in a free economy, and in Jabotinsky's wake-up call to Jews to leave eastern Europe before the onset of genocide.

Jabotinsky died in New York in August 1940. Netanyahu had gone with him, and acted as the guardian of his legacy: he lobbied passionately for a Jewish state with Harry Truman's secretary of state, Dean Acheson, and President Dwight Eisenhower. And while he opposed the UN general assembly partition solution of November 1947, he probably deserves some credit for getting Washington to back the creation of Israel the following year.

After his return to Israel in 1948, Benzion had to accept that the former Irgun underground militant, Menachem Begin, was now the political leader of Revisionism. If anything, Benzion's views hardened: Begin called him an extremist and others a racist.

From 1949 onwards, Benzion concentrated on his research, while earning a good living as editor of the popular Encyclopedia Hebraica. Citing discrimination by a hostile leftist academic establishment in Israel, Benzion took his wife, Tzila, and young family to the US in 1956. Thus Binyamin was raised in an environment where he saw himself and his family, despite his privileges, as double outsiders – both from a socialistic Israel whose Labour party had wrested the Zionist narrative from the Revisionists and from a Begin-led Likud.

None of the five "founding fathers of Zionism" whom Benzion profiled in his book (in 2004 in Hebrew and this year in English) came from the Labour tradition. For Benzion, Binyamin's victory in 1996, when he was narrowly elected as Israel's youngest-ever prime minister, and his regaining of power in 2009 were moments of almost personal vindication. In 1976 he had suffered the great loss of his eldest son, Yonatan, killed while leading the Israeli raid on a hijacked French airliner at Entebbe, Uganda.

Born in Warsaw, while Poland was part of the Russian empire, Benzion Mileikowsky was 10 when his family left for British-ruled Palestine. Benzion's Lithuanian-born father, Rabbi Nathan Mileikowsky, soon changed the family name to the Hebrew Netanyahu, meaning "God has given". He toured Europe and America exhorting Jews to "return to Zion". Benzion ("son of Zion"), by contrast with his Orthodox father, lived a secular life; yet, in the words of David Remnick in the New Yorker: "His judgment of Israel and history are often so dark, so unforgiving, that he sounds like the harshest of Old Testament prophets … his range of disapproval is breathtaking."

Benzion studied medieval history at Jerusalem's Hebrew University, graduating in 1933. Soon he was co-editing Revisionist publications. From 1940 to 1948 he was in New York, and in 1944 married Tzila Segal, a native of Petach Tivka, Palestine, who had studied law at Gray's Inn, London. From the 1950s to the 70s, the Netanyahus alternated between Israel and the US, with Benzion teaching at Dropsie College, Philadelphia, the University of Denver and Cornell University.

Over time, he worked on a novel thesis regarding the Jews of late medieval Spain. Prevailing opinion held that the "conversos" were secretly still Jews, and were persecuted for that by the Inquisition. In The Origins of the Inquisition in Fifteenth Century Spain (1995), Benzion argued that this was a romantic delusion: most genuinely accepted Catholicism and wished to assimilate, yet were persecuted because they had Jewish blood and aroused Christian envy by their success. Critics said he was swayed by his perception of the Holocaust "through a rear-view mirror": his conclusion, that only an Israel could save diaspora Jews, smacked of polemical bias and persecution mania. Nonetheless that work and others on Jewish Spaniards have won praise for their fluency and thoroughness in recent years.

Benzion could seem forbidding. In 1998 he publicly chided his son for part-relinquishing Israeli control over Hebron. He showed wariness even towards Israel's "dedicated benefactor", the US, said Remnick. Yet his leftist publisher, Jason Epstein, spoke of a mutual friendship based on "admiration akin to love". Tzila died in 2000, and he is survived by Binyamin and his other son Iddo, a novelist and radiologist.