Righteous Among the Nations - and much more 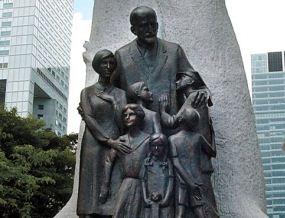 Polish author Janusz Korczak is best remembered for accompanying 200 orphans to the gas chambers, but scholars insist that there is more to his legacy than the Holocaust.

Agnieszka Witkowska motions toward the orphanage's large hall, smiles and says: "Here is where 200 children used to eat." Witkowska is the deputy director of the Korczakianum Center for Documentation and Research in Warsaw, which is dedicated to commemorating Janusz Korczak. Her office is on the first floor of the orphanage at 92 Krochmalna Street, where Korczak's famous orphanage operated prior to its transfer into the ghetto. Resting on a shelf in her office is a Hebrew-language copy of Kaytek the Wizard, published by Am Oved, one of my favorite childhood books. In 1912, Korczak and his partner Stefania Wilczynska founded the orphanage in Warsaw. Next week will mark 70 years since Korczak and Wilczynska's famous march at the head of 200 schoolchildren from the Warsaw Ghetto to the train that led them to the gas chambers in Treblinka.

Korczak, today as well, is a well-known and beloved Polish cultural hero. His Jewish origins are less significant to her, and are certainly not critical to her work. Asked if he still exists in Warsaw today outside the memory of the Holocaust, but as an author and educator, Witkowska responds affirmatively. In her opinion, his place in posterity is preserved irrespective of his tragic end: "He worked here, in this building, for nearly 30 years. It's not fair to focus everything on his final days. It's important to remember his all-encompassing life's work."

Dr. Yael Darr, a children's literature expert at Tel Aviv University's research program of child and youth culture, points out the same exact problem, from the Israeli perspective. "We in Israel read his books with the black cloud of gas from the camps hovering over them. It is wrong to read them with this heavy weight attached to them. Korczak's books and message are universal. Children, even today, are a population group lacking any real rights. In his books, Korczak wanted to give them power and independence."

Darr says it is surprising to find how relevant the books he wrote for children remain. "A reader aged 8 to 12 can gain a great deal of satisfaction, interest and food for thought. The very act of reading these books is part of the exercising of independence that was so important to Korczak."

The great value of Korczak's children's books, according to Darr, lies in that he felt tremendous respect for both readers and literary characters. "He has a special worldview and a wonderful ability to express himself."

In a foreword that appears in the new Hebrew-language translation of King Matt the First (published by Keter ), the author Uri Orlev, who was awarded the Hans Christian Andersen Gold Medal for Children's Literature and who has translated Korczak's works into Hebrew, relates how he met Korczak when he was 8 years old, when Korczak came to visit Orlev's teacher. "I knew that it was him who wrote the books. I'd already read some of them, but that is not what made the big impression on me. Rather, it was the fact that he was my teacher's teacher. I looked at him with awe."

In Orlev's view, Korczak framed the educational doctrine that many of us now live by. "When Korczak wrote his doctrine, it was common practice in the schools to mete out harsh punishments such as whipping, which have since disappeared. He was also the only pediatrician vehemently opposed to the demand that children nap in the afternoon. When we came to kibbutz, they made us take naps in the afternoon and we often escaped, out the windows. But early on, Korczak understood that there was no point to it. He rebelled against all these things and liberated education from the tough disciplinarianism that had been the rule."

In Orlev's opinion, the experimental schools in Israel today are direct descendants of Korczak's belief system. "In these schools, they understood precisely what Korczak was preaching - you cannot educate a child against his will. If he prefers to sit outside the classroom it's best to let him do so. Eventually, he will come to his senses and will understand what exactly is good for him."

Dr. Moshe Shner, who teaches philosophy and Jewish thought at Oranim College, is also infuriated by the notion that Korczak is remembered and referred to solely in the Holocaust context. "He had 40 years of pedagogy, writing and achievement prior to the Holocaust. It is important to remember his immense accomplishments - he was a distinguished educator, and one of the framers of the first Declaration of the Rights of the Child, which was presented in Geneva in 1924. It is astounding to see how very progressive his approach was. It was strongly echoed in 1989's UN Convention on the Rights of the Child, even if very few people now remember it."

In Shner's opinion, there is tremendous significance to Korczak's universalist and humanist approach. "He insisted on saying that children are people, having nothing to do with the fact that they are Poles, Jews or Arabs. He also said this when he visited Palestine in the 1930s.

Korczak was no romantic, Shner stresses. He knew that children are not angels. Nevertheless, he demanded that they be related to with seriousness and respect. As part of this doctrine, Korczak championed the instituting of democratic processes in educational institutes.

Shner sadly explains that he does not now teach a course on Korczak's pedagogical doctrine, and to the best of his knowledge, no such course is taught in other academic institutions. "We shunted him off into the Holocaust memory corner, and the loss is all ours."

On August 5, 1942, Korczak, Wilczynska and 200 of the orphanage's children were put on the train to Treblinka. "Korczak," the film made by Polish director Andrzej Wajda in 1990, contains an unusual scene that was the object of widespread criticism from critics around the world. In it, the children and their teacher skip from the train into a glittering field and run in slow-motion into the light. The reality was a great deal grimmer.

Dozens of stories and myths have been told about the final march of Korczak and his charges. It was claimed that they walked with pride, waving flags or even singing. Orlev explains, in a soft voice and with abundant patience: "People don't understand the situation back then. They come up with complaints that Korczak led the children to their death without trying to save them. People don't understand that they did not have any choice. Who would have hidden them? Who had any food? Or a place to hide?"

Orlev then reads me an excerpt that he'd just finished translating that morning, which contains an eyewitness account from one Mark Rudnitzky, who described the final march of Korczak and his students: "The atmosphere was saturated with hopelessness, helplessness, paralysis. There was no outpouring of emotion at the sight of Korczak walking past, there were no salutes [as several people have related] and no intervention by emissaries of the Judenrat. No one walked up to Korczak. There were no gestures, no singing, no heads held high with pride."

In a new book published this year, "Janusz Korczak and Itzhak Katznelson - Two Educators in the Abysses of History" (Dor LeDor, Tel Aviv University School of Education ), Shner describes Korczak as a universalist lacking in Jewish traits, who does not take part in activities of the Jewish national movement. Korczak spoke several languages, but neither Hebrew nor Yiddish. Based on Shner's description, Korczak went to his death with a stoic equanimity born of absolute acceptance.

In a different book published this year ("The Child is a Person: Janusz Korczak's Educational Thought" ), Dr. Marc Silverman, who teaches at the Hebrew University of Jerusalem's School of Education, describes the approach of the Polish physician and educator as complex. He argues that Korczak's rebellion expressed itself in a wish to die in a different manner, in an effort to preserve human dignity and humanity.

In conversation, Silverman explains that what sets Korczak apart is that he succeeded in maintaining for decades that which others only talk about. "He said that it is impossible to educate children without their full partnership and consent. It's easy to say that, but Korczak did it in a practical way. The final march, regrettably, was imprinted so deeply in our memory that it casts a shadow over this facet of his legacy."

There is a scene in Wajda's film about Korczak in which the doctor is sitting with his partner in the orphanage Stefa Wilczynska, and says, "I've drunk champagne three times in my life, and I've eaten ice cream only 20 times. What a fool I've been."

The scene is noteworthy because these sorts of glimpses into Korczak's life are rare. There has been fairly little consideration of his personal life. Shner imagines him as a sort of monk who devoted his life to the treatment of children and lived in a modest little room in the orphanage on Krochmalna Street.

Korczak, as opposed to many other educators, practiced exactly what he preached. Silverman also notes an added value to his words - Korczak wrote every story on the basis of his own experience. "He entered the education field intent on fixing society, and realized that that is where his mission lay."