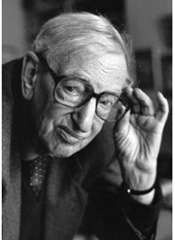 While he chose to be English and a Communist, the historian's Jewish identity had been imposed on him. Perhaps that's why he was seeking to redefine the terms of his identity of birth, denying its connection with a second country and a competing ideology.

"Hobsbawm was not a Jewish historian; he was an historian who happened to be Jewish," said Professor Donald Sassoon, student, friend and colleague of Eric Hobsbawm, the British historian and lifelong Marxist who died on Monday in London, at the age of 95.

Professor Hobsbawm inspired many on the left with his analysis about the failings of bourgeoisie society and of nationalism, and infuriated others across the political spectrum with his committed loyalty to the Soviet Union and to Communism. "I didn't leave the Party, they left me," he used to say, after the Communist Party in Britain was dissolved in 1991.
The Jewish travails of the 20th Century influenced his early life. Hobsbawm was born in 1917 in Alexandria to a British father (a colonial officer working for the post office) and an Austrian mother. However, he grew up in Vienna and Berlin, where he witnessed as a schoolboy the Nazis come to power. Shortly after, his family moved to London, where he studied before continuing to Cambridge and to a lifetime of research, writing and left-wing activism. Despite coming from a secular background and having shunned Hebrew studies as a child, Hobsbawm had been told by his mother: "whatever you do, never deny you are Jewish." He held on to that, in his own way.

Hobsbawm wrote about a wide range of historical issues, from the history of prisons to anarchists and social bandits, he wrote of the lives of Britain's working class, the British Labour movement, and was even a jazz critic for a decade. But he was most widely known and praised, including by many political opponents, for his writing on European history. It was in his texts on political theory and on 19th and 20th century European history where Hobsbawm was especially critical of the nationalist movements, among them of Zionism.

"He was certainly an anti-Zionist," Sassoon said. "He used that word, but for him it meant he did not share the idea of Jewish nationalism that there should be an ethnically defined state in Palestine. For him being Jewish meant cosmopolitanism and anti-nationalism. He hated any kind of nationalism, including Jewish nationalism. He was a Communist because he always thought that Communism was an international movement."

For Hobsbawm, "heritage" and "history" were often contemporary constructions made to fit modern political and social needs. He believed that Herzlian Zionism had been manufactured in the same way and was not an authentic continuation of the ancient Jewish connection to the Promised Land.

Seeing Theodor Herzl as a traitor to the cause of Jewish cultural assimilation, Hobsbawm listed "Herzl's project of Jewish nation state" in the last page of his autobiography among ideologies he thought to be bad ideas, saying Herzl "would have done better to stay with the Neue Freie Presse as its star columnist."

His historical and theoretical criticism of Zionism extends to severe discontent with Israel's current policies. In February 2007, Hobsbawm was one of the founding signatories of Independent Jewish Voices, a group of prominent British Jews who claimed that the Jewish establishment was silencing those who were critical of Israel's policies towards the Palestinians.

In an interview with the Guardian in 2002, he tried to be slightly more qualified than in his autobiography: "I was never a Zionist. Once Israel was in existence or Jews were settled there, then the idea they should disappear was not on. I have never been in favor of destroying or humiliating Israel. I am a Jew, but being a Jew does not imply being a supporter either of Zionism and even less of the particular policies now being pursued by the government of Israel, which are disastrous and evil. They are policies logically leading to the ethnic cleansing of the occupied territories... I am very strongly of the opinion that Jews must say it is possible to be a Jew and not to support Israel."

Those who knew Hobsbawm said that despite his denigration of much of what is presented as English heritage, he felt very attached to the country he came to in 1933, and "he felt himself very English." But while England was his sanctuary and Communism the ideology he chose to adhere to, his Jewish identity had been forced upon him. Perhaps that is why he was ultimately more generous and forgiving of his two identities of choice, while seeking to redefine the terms of his identity of birth and deny its connection with a second country and a competing ideology.