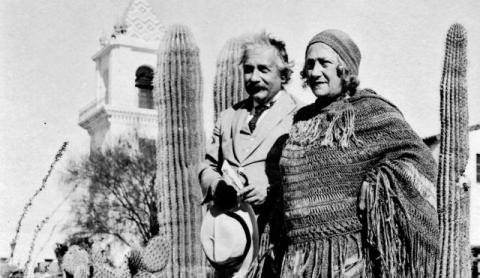 Millions of photographs and documents have been uploaded to a new website, offering users a free and fascinating insight into the history of German-speaking Jewry, with Albert Einstein the star attraction.

Albert Einstein, for example, was not interested only in the kinetic molecular theory of heat, the electrodynamics of moving objects, quantum mechanics and the inertia of energy. The German Jewish genius also made time for riding a bike, sailing, fishing, lying on the beach, playing the violin, pipe smoking and tea parties. At least, this is what emerges from his private photo album, which has recently been uploaded to the Web as part of the Leo Baeck Institute's huge digitization project.

The new site, which is already available to the general public but will be formally inaugurated next week, offers access to about 3.5 million pages documenting the rich Jewish life in Central Europe. The Leo Baeck Institute, which has its center in New York, is one of the leading establishments in the research and documentation of German-speaking Jewry. So far, three quarters of its archival collection has been digitized and made available to the public for free.

The project is named DigiBaeck (www.lbi.org/digibaeck) and offers a digital gateway to the institute's growing collections. As well as the millions of pages of documents in German, there are also documents in over a dozen other languages, and many pieces in the collection include English translations.

The material online ranges from community and family histories, rare books and works of art, to the personal papers and photographs of luminaries such as Einstein and Moses Mendelssohn. There are also letters, diaries, recipes and other ephemera chronicling the lives of everyday folk over five centuries, with a particular emphasis on German Jewry. Alongside documents from luminaries such as Einstein, Mendelssohn, Franz Kafka and Sigmund Freud, are papers from "ordinary" people.

"The archive focuses on everyday and family history - not only famous people who are identified with German Jewry but also ordinary people of all classes," says Dr. Anja Siegemund, the director of the Leo Baeck Institute in Jerusalem. "Through them it is possible to learn a great deal about the history of German Jewry - as much as from reading the letters of Einstein and Kafka."

For example, the archive contains diaries and memoirs of ordinary German Jews that have never been published and are now awaiting research work. Much can be learned from these materials about Jewish life in Germany - from the revolutions of 1848, through emigration to Shanghai or the Kindertransport in which Jewish children were sent to safety in England, to the participation of Germans in the civil rights movement in the United States in the 1960s.

Predictably, however, the most outstanding items in the archives are those connected to prominent and important individuals. The institute has digitized the original manuscripts of the most important works of Austrian-Jewish author Joseph Roth (1894-1939 ). Best known for his elegiac novel on the decline of the Austro-Hungarian Empire, "Radetzky March," Roth now arguably stands alongside Kafka, Mann, and Musil in the canon of world literature.

Also among the digitized documents are the complete diaries and correspondence of philosopher and theologian Franz Rosenzweig, including writings related to his landmark translation of the Hebrew Bible into German (1926-1929 ) with Martin Buber, as well as the entire estate of the philosopher Constantin Brunner.

The archive includes collections representing four generations of the Mendelssohn family, the quintessential German-Jewish dynasty. These range from personal effects and correspondence of the patriarch, Enlightenment philosopher Moses Mendelssohn, to letters written by his grandson, the composer Felix Mendelssohn.

The future of Israel

However, there is no doubt that Albert Einstein steals the show. He features in about 600 stunning photographs - many unfamiliar to the general public - which are just a part of a collection of 25,000 photographs of Central European Jewry that are now available in the digital archive. Einstein married his cousin, Elsa, in 1919. They remained married until her death in 1936 in Princeton, and many photographs from this period show the Einstein couple together. Along with the photos, the guestbook from the Einsteins' lakeside summer house at Caputh, outside Berlin (from the years 1929 to 1932 ), has been scanned and uploaded to the site, including inscriptions in the handwriting of Chaim Weizmann and drawings by artist Hermann Struck.

The archive also contains Einstein's correspondence with many people on a variety of topics - from art and music to the future of Israel. For example, on January 1, 1930, Einstein sent one of these letters to journalist and Zionist activist Robert Weltsch, who, among other things, was also a Haaretz reporter. In the letter, Einstein praises a speech Weizmann delivered, and asked Weltsch to organize a meeting for him with Arab students.

Einstein's archive, which is now in the process of being scanned for the Leo Baeck Institute, complements the Einstein archive launched this year at the Hebrew University of Jerusalem, which includes 2,500 documents chronicling his scientific work, his public activity and his private life.

"German-speaking Jews accomplished breakthroughs in so many fields - from science and medicine to art and architecture - so it is appropriate that this archive is the first to present itself in its entirety on the Internet," said Carol Kahn Strauss, executive director of the Leo Baeck Institute. "Before the Nazi seizure of power, Jews in Germany probably had better opportunities for success than Jews anywhere else in the world," she said. "As a new Jewish community once again flourishes in Germany, it is all the more important to ensure it also has broad access to this past."

Founded in 1955, the Leo Baeck Institute was named for the rabbi who was the last leader of the Jewish community in Germany under the Nazis. Rabbi Baeck survived the Theresienstadt concentration camp in Czechoslovakia, eventually becoming the institute's first president. The institute was set up with offices in New York, London and Jerusalem, with New York the site of its library and archives. Since the opening of the Jewish Museum in Berlin (in 2001 ), the institute also maintains a branch of its archives there.

The institute, a research library and archive, contains the most significant collection of source material relating to the history of German-speaking Jewry, from its origins to its tragic destruction by the Nazis and continuing to the present day. Dating back almost 2,000 years, when Jews first settled along the Rhine, the Jewish communities of Germany, Austria and other German-speaking areas of Europe had a history marked by individual as well as collective accomplishments. To appreciate the impact of German-speaking Jewry in modern times, one need only recall such names as Martin Buber, Albert Einstein, Sigmund Freud and Franz Kafka.

This Tuesday, there will be an event at the Leo Baeck Institute in Jerusalem to mark the inauguration of the new archive, during which a symposium open to the public on the history of German Jewry will be broadcast live from New York. The broadcast will include a lecture on archives in the age of the Internet.

Brewster Kahle, the founder of Internet Archive, says he established the resource "with a mission to provide free access to all printed materials in our libraries around the world through digital means. I found a like-minded partner among the leadership of the Leo Baeck Institute, who keenly understood that digital access is essential in fostering not simply the ease of scholarship, but a general heightened awareness of the culture that they have so painstakingly preserved for more than half a century."