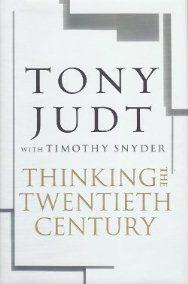 In the last book he wrote before his death, one of America’s most celebrated intellectuals shares his insights on everything from French socialism to the Arab-Israeli conflict.

"Thinking the Twentieth Century" by Tony Judt, is one of the most fascinating books I've read lately. I didn’t get through a page without making a note and thinking, “I have to remember to quote this.” By the time I finished the book, I had marked it up so much, there’s no way I’ll be able to pick a quote.

Judt died two years ago, at the age of 62, from Lou Gehrig's Disease, having won worldwide fame following the 2005 publication of his mammoth history "Postwar: A History of Europe Since 1945." Anyone who read Gidi Weitz's interview of him at the time for Haaretz Magazine could have guessed that a book structured as a series of conversations between the New York University historian and Yale historian Timothy Snyder would be a repository of intellect, knowledge, sensitivity and sobriety.
A month before his death, in August 2010, Tony Judt's conversations with Snyder ended. Synder is an expert on the history of Eastern Europe and comes across in the book as a worthy conversation partner and admirer of Judt. He also appears to be more radical than Judt, at least about the United States. The book is a combination of autobiography, short historical historical essays – on France, Cambridge, the Czech Republic, Poland, Israel and kibbutzim – and analyses of various issues – some that Judt had previously done historiography on and others that he never got to. The book provides a methodological basis for examining the role of the intellectual in the 21st century.

Judt was born in south London in 1948, and the first part of the book outlines his Jewish, lower-middle-class childhood. He talks about his desire to study English literature in high school as a way to assimilate into his adopted culture, where he sometimes felt at home and other times like a stranger. His grandparents emigrated from Eastern Europe to Belgium and then Ireland, and his parents moved to London.

His father was a sober-minded leftist who bequeathed his suspicions of Communists to his son. Perhaps partly as a result, the anti-Establishment New Left movement that was surging in London during Judt’s youth never carried him away. Rather, Judt looked toward Paris, Berlin, Frankfurt and the cultural centers of Italy for inspiration. He was accepted to King's College, Cambridge, and started to write his thesis on the French Socialist Party in the years between the two world wars.

It sounds boring today, and was even more so then. After all, the Socialist Party had almost ceased to exist, while Europe was in the midst of ideological turmoil and revolution. Nevertheless, Judt insisted on focusing on the party, as well as the broader Popular Front alliance of left-wing political movements and its leaders, which included the Prime Minister of France, Leon Blum.

Blum was the first great leader of French Socialism after Jean Jaures, and Judt was intrigued by his affinity for peasants, who he saw as the last bastion of socialism. Judt’s attraction to the Jewish leader, who was so removed from the people he idealized, may go a long way toward explaining his interest in a party that was clearly a lost cause by the late 1960s.

Judt devotes some time to discussing anti-Semitism in the West, on both sides of the English Channel as well as the Atlantic Ocean.

"I encountered quite a lot of anti-Semitism from boys whose parents were no doubt anti-Semitic as well," he writes. "Among the South London lower middle class and working class … anti-Semitism was neither rare nor remarkable. We forget how much anti-Semitism there was in England, at least until the radical shifts of the 1960s and the emerging awareness of the Holocaust. Winston Churchill certainly did not forget. His wartime intelligence services had kept him appraised of widespread suspicions of Jews, and persistent mutterings to the effect that the war was being fought 'for them.'"

France had its own unique tradition. Despite a rich history of anti-Semitism the country had six Jewish Prime Ministers. Judt noted that Americans are often quick to judge the French on the subject while ignoring their own country’s record.

"I have often thought that what America needs more than anything is a critical education in its own history,” he writes. “That France has a contemptible record of official anti-Semitism is well-known. French anti-Semitism was above all cultural – and under the auspices of the Vichy regime, of course, that cultural prejudice shaded into active participation in genocide. But politically, French Jews have long been free to rise high in the service of the state: And of course they had access to higher education while Harvard, Columbia and other places were still imposing rigid quotas on Jews and other minorities."

Although he emigrated to the U.S. and saw himself as an American, Judt didn’t shy away from confronting his country’s taboos.

"A few years ago I reviewed Ernest May's history of the fall of France. In the course of that essay, I enumerated the scale of French losses in the course of the six weeks of fighting that followed the German invasion of May 1940. About 112,000 French soldiers (not to speak of civilians) were killed: A figure that exceeds American deaths in Vietnam and Korea together – and a rate of killing far greater than anything the U.S. has ever experienced."

The essay, published in an American weekly in 2001, didn't go over well.

"I received a pile of correspondence from otherwise well-meaning readers who assured me that I must have gotten the figures wrong. Surely, they wrote, the French don't fight and die like that?"

Judt often makes transitions like this, jumping from the political past to the political present. The context of the angry letters he received was, of course, the fall of the Twin Towers. Americans couldn’t comprehend that there were other tragedies that matched the scale of their own.

Judt also has plenty to say in the book about Marxism in a variety of contexts.

"That Marxism is a secular religion seems self-evident. But just which religion is it tracking? That is not always so clear. It comprises much of traditional Christian eschatology: the fall of man, the Messiah, his suffering and humanity's vicarious redemption, the salvation, the rise and so on. Judaism is there too, but less in substance than style."

Despite Judt’s great admiration for Eric Hobsbawm and other Marxist historians he knew, his work evinces a strong distaste for communism. He inherited this attitude from his father, and it was reinforced by his interactions with exiles from Eastern Europe, especially the Czech Republic and Poland. Having taught at the University of California, Berkeley and St. Anne’s College, Oxford, Judt moved to Atlanta, Georgia, in the early 1980s. There he met a Polish sociologist, Jan Gross, who he helped secure an academic position. His professional advocacy on her behalf soured his relationships with some faculty members, but it also changed his life. Through her, he met exiles and scholars who had lived under Communist tyranny. His engagement with Eastern European intellectualism eventually led him to study the Czech language.

And Eastern European thought is at the center of his last book. While many of us are generally familiar with the great Polish poets, Judt introduces us to sociologists and historians, whom he sees as the kinds of intellectual figures that have gone extinct in the West.

Then, of course, there is the Israeli angle. Judt was volunteering at Kibbutz Hukuk in the north when the Six-Day War broke out. After the war he went to Kibbutz Machanayim and from there was sent to work for the Israel Defense Forces. At some point, he became disillusioned with Zionism. After many years of silence, during which he lived in France, England in the U.S., Judt finally gave voice to what many American Jews and non-Jews thought but didn’t dare to say. A substantial section of his book is devoted to the furor surrounding the publication of his famous article advocating a one-state solution, for which pro-Israel Jews in New York attacked him. He also mentions his decision to speak out while U.S. President George W. Bush was beating the drums of war over Iraq.

"The war in Iraq illustrates … that a democracy, and particularly an armed democracy, is very easily led into war – so long as it is told stories of the kind that are compatible with its self-image," he wrote.

Judt was a generous man, and he dispenses compliments to his teachers and adversaries alike. His serious consideration of Zeev Sternhell’s views on fascism is a pleasure to read, as is the book as a whole.