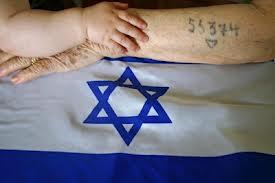 It may pass on through generations, experts say - but it may also forge better coping mechanisms.

As Israel shifted from the Holocaust to war, Israeli researchers have been keen to study the transmission of trauma between the generations. While about it, they found an upside to trauma, or in other words - being the child of a survivor can have a positive effect. Children of Holocaust survivors are the most investigated group in Israel, with more than 500 studies.
Some studies found that Holocaust survivor trauma passes on to the next generation, manifesting in higher rates of depression, anxiety and functional difficulties. In some cases, evidence was reported of trauma reaching the third generation.

Yet recent studies cast doubt on whether trauma can be transmitted through the generations at all. In a 2003 meta-analysis of 32 studies, researchers at Leiden University in the Netherlands found no evidence of the transfer of Holocaust survivor trauma to their children. But perhaps it's all about where and when the evidence is gathered.

Other studies found that transmission of trauma only happens during times of stress. In a 1988 study, Israeli combat veterans suffered higher rates of posttraumatic stress if they were children of survivors. "We saw that even if members of the second generation didn't exhibit signs of trauma in ordinary day-to-day situations or under ordinary pressure, conditions of significant pressure such as war caused more significant traumatic injury,” says Prof. Zahava Solomon of Tel Aviv University's Bob Shapell School of Social Work.

The tendency here is survivors’ children expunging the memory of their parents’ shame – shame that stemmed from the belief that Jews had gone like sheep to the slaughter. Thus children tried to show strength near their parents, a strategy that crumbled after experiencing combat. “The protective behavior pattern of Holocaust survivors toward their children explained the higher incidence of trauma among members of the second generation, because the parents made every effort to keep the child in the role of patient so he wouldn't have to return to the battlefield,” Solomon says.

In a 2000 study at Hadassah University Hospital, Ein Karem, women with breast cancer were found to have experienced worse trauma if they were the children of survivors.

Meanwhile, evidence has increased that Holocaust survivors developed coping mechanisms against trauma; they showed unexpectedly positive responses to various situations despite having suffered the Holocaust. This phenomenon is known as posttraumatic growth. “Posttraumatic growth and posttraumatic stress can exist alongside each other... For example, Holocaust survivors have a greater appreciation for love and family relationships. They also distinguish sharply between the essential and the trivial,” Solomon says.

In the study of Lebanon veterans, three follow-ups were carried out years apart: 669 soldiers were examined immediately after the war. Nineteen percent of them (127) were the children of survivors. Of them, 45.6 percent developed posttraumatic stress, compared with 42.7 percent who were not children of survivors.

Listening to the sad history

In the study of veterans who had fought in the Yom Kippur War, the findings were even more surprising. Whether studied in 1991, 2003 or 2008, veterans were more likely to have posttraumatic stress if they were not children of survivors. In 2008, posttraumatic stress was diagnosed among 42.5 percent of veterans who were not children of survivors, compared with 32.4 percent of those who were.

According to the Diagnostic and Statistical Manual of Mental Disorders, symptoms of posttraumatic stress – including dreams, flashbacks, avoidance of certain situations, hyper-vigilance and exaggerated startle responses – decreased among Lebanon veterans who were children of survivors. The picture was different among soldiers who were not children of survivors. While their symptoms decreased from 1983 to 1985, the 2002 follow-up noted an increase in symptoms.

The research team was led by Solomon and Sharon Dekel, a psychologist and researcher at Bob Shapell. The study's findings were published in February 2013 in The Journal of Psychiatric Research in the article “Secondary salutogenic effects in veterans whose parents were Holocaust survivors?”

The findings suggest that Holocaust survivors’ influence on their children is not necessarily pathogenic. Despite the greater possibility of developing posttraumatic stress, the study shows that children of Holocaust survivors have better coping mechanisms. Hearing about their parents' sufferings during the Holocaust may have helped them develop better mechanisms for coping with posttraumatic stress after they fought in Israel’s wars.

The researchers believe that social support may have helped survivors’ children cope with their war experiences. Many children of Holocaust survivors grow up in a family where the parents are highly protective and devoted. This finding conforms with studies showing that parental closeness strengthens children’s self-confidence.

A separate study headed by Solomon of Yom Kippur War POWs showed another mechanism linked to posttrauma. Here, trauma is passed on to family members who develop signs of secondary traumatic stress – also known as compassion fatigue. The study, entitled “Together in Pain: Attachment-Related Dyadic Processes and Posttraumatic Stress Disorder,” was published in 2010 in The Journal of Counseling Psychology. It found that the risk of secondary trauma among POWs’ wives was 21 to 50 percent higher than in the general population.

“Just as there’s a transmission of traumatic effects from the one exposed to those close to him, the chance that the positive aspects identified in the new study could be transmitted to family members should be examined,” Solomon says.