Reflections by a 'second-generation, Shoah-lite' Pole 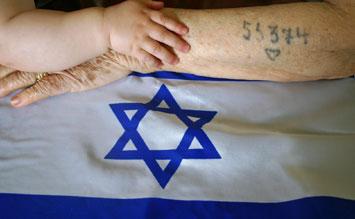 Seventy-odd years on, our lives as Israelis − and certainly as Jews − are still suffused with and permeated by the shadows of the Holocaust. If it is not the pitiable plight of the survivors in Israel that preoccupies us, it is the verbal fight being waged by what I call “Holocaust exploiters.” When it is not those who deny that the Shoah happened, it is Netanyahu warning about the inevitability of its second coming from nuclear Iran. When it is not various people − Jews and gentiles, Israelis, Palestinians and others − comparing the Israeli occupation of the Palestinians to the early stages of the German occupation of European countries during World War II, then it’s settlers who see the soldiers who are policing them as Nazis. Or the ultra-Orthodox wearing concentration-camp garb protesting what they see as being discriminated against by the Zionist ‏(God help us!‏) Jewish state.

It is my firm belief that whoever wishes to make a declaration on any issue even remotely connected to the Holocaust should come clean, in the spirit of proper disclosure, about his or her personal connection to it, to allow his audience to gauge his or her bias, if any. Not that one has to have a personal stake per se before voicing one’s opinion on this subject, but if there is one, it should be expressed up front. Even the absence of such a connection ‏(that is, even not having a family that suffered due to these terrible events‏) could also give rise to a bias of some kind, at least to my mind.

I’ve always considered myself to be “second-generation, Shoah-lite”: My parents survived the war in Soviet Russia, to which they escaped from Warsaw in September 1939. They lived there until June 1941, and then my father enlisted as a physician in the Red Army. They lost contact with each other − my mother was a teacher for nine months in Tatar villages − but luckily he found her and eventually they returned to Warsaw in 1945. True, they lost their parents and siblings in the Warsaw ghetto and in Novogrudek ‏(today in Belarus‏), but to the best of our dim knowledge not in the death camps.

So I think they had it “easier” than many others. At home, during my formative childhood and adolescent years, the subjects of the Shoah in general and our family’s fate in it, in particular, were subjects treated matter of factly and with a measure of equanimity: neither as a forbidden topic, nor as a dark cloud hovering over the present. My parents shared the facts as they knew them with us, their children, and that was that.

My sister and I were born in Poland, and therefore − unlike many Israelis and Polish born Jews − for me Poland is not the graveyard of the Jewish nation, but rather embodies my era of innocence, during which I lacked, at least until the age of seven, any knowledge of even being Jewish, let alone having something called “the Holocaust” in my family background. I grew up without any grandparents but I do not remember being bothered by that in the slightest. ‏(Having had no experience as a grandchild probably accounts for my ineptness as a grandfather nowadays, not that this exonerates me in the slightest.‏)

I am rambling somewhat with this preamble because I’m still trying to come to terms with my reflections and emotions following a weekend spent three weeks ago with my two adult sons ‏(aged 39 and 37‏) in Warsaw, on the occasion of the 70th anniversary of the Warsaw Ghetto uprising − an event which coincided with the opening of the new Museum of the History of Polish Jews. Being there together was basically their idea of rather intensive national-familial-Jewish-Israeli-Polish-male bonding.

My colleague Ofer Aderet reported extensively on the events of that particular weekend in Haaretz, but I would like to share two or three glimpses of them, no doubt colored by my bias ‏(see above, and below‏).

Since 1946, one of the surviving leaders of the Warsaw Ghetto uprising, Marek Edelman ‏(who passed away three years ago‏) would arrive at noon every year on the anniversary of the uprising − April 19 − and lay a wreath of yellow daffodils on the monument for the Heroes of the Uprising, in the Muranow district of Warsaw, where the once ghetto was. This year, between April 19 and 21, a few hundred volunteers were distributing to passers on the streets of Warsaw yellow paper daffodils bearing the logo of the commemorative events, to be pinned on the lapel.

For me and my sons, three Jews walking on Warsaw streets, the very notion of singling ourselves out by attaching a yellow-flower-cum-star-shaped badge to our garments seemed awkward, to say the least. Israelis who heard about that particular aspect of the events from me were taken aback, even though in fact, there were no yellow Stars of David in the Warsaw Ghetto: Jews in that city were forced to wear a white armband with a blue Star of David on it. Still, all those present − some 3,000 people, most of them non-Jews − at the ceremony in front of the monument wore the yellow paper flower on their lapels proudly. Many also carried bunches of yellow daffodils in their hands, and laid them on the monument following the formal proceedings.

On the evening of Friday, April 19, we attended a jazz concert in the auditorium of the new museum building, an event entitled “Bund Band − a tribute to Marek Edelman.” Wojtek Mazolewski ‏(bass guitar and vocals‏) led a six-man jazz combo in a jam-session based on Bund Yiddish songs. The idea of such a concert was launched some six years ago, when the new museum was in its early planning stages, and it was only fitting that it should be the first event in the new auditorium.

After a couple of pieces Mazolewski announced that the band ‏(two saxophones, a trumpet and percussion‏) would perform a non-Bund piece − what is popularly called “The Jewish Partisans March,” written in Yiddish by Hirsh Glick in 1943 in the Vilna Ghetto. Mazolewski read out the first verse of the well-known song in Polish ‏(the English is “Never say that you have reached the final road”‏). When the band started playing the well-known melody, presenting the theme for improvisation, the whole audience of about 500, mostly non-Jews, stood up, then sat back down again when each of the players in turn did their “solos.” When the band started to reprise the theme, toward the end, the whole crowd stood up again, as if an anthem was being performed.

The heroic Warsaw Ghetto uprising that began on April, 19, 1943, pitted several hundred meagerly armed Jews against heavily armed Nazi troops intent on destroying the ghetto and all Jews remaining there. Subsequently, the revolt by the Polish resistance ‏(in which some of the ghetto uprising survivors also fought‏), which began on August 1, 1944, constituted a major act of defiance by the resistance forces, who were counting on the support of the Soviet army. But it sat idly on the other bank of the Vistula River and let the Nazis finish off the Poles: Following 63 days of fighting, that uprising ended in defeat.

It is estimated that about 16,000 members of the Polish resistance were killed and about 6,000 seriously wounded. In addition, between 150,000 and 200,000 Polish civilians died during that period − mostly due to mass executions.

By the end of the war, about 85 percent of Warsaw lay in ruins, with barely 1,000 survivors living among them.

For many years the Poles knew much more about the 1944 Warsaw uprising than about the ghetto revolt of 1943. By the same token, most Israelis knew probably next to nothing about the resistance’s uprising. The events in Warsaw a few weeks ago highlighted the ghetto revolt as a heroic Jewish action which served as a beacon of freedom and daring for the Polish resistance, and placed the Jewish freedom fighters within the Jewish-Polish narrative of a common struggle “for our freedom and yours.”

There is a fairly new exhibit on at the Museum of the Polish Uprising in Warsaw, entitled “A City in Ruins,” which has a 3D film featuring an aerial view of the almost completely devastated Warsaw of January 1945. The small auditorium allows only 24 special 3D-glasses-wearers in at a time, and the screening of the reconstructed computerized archival footage takes about five minutes − the amount of time a real flight over the city would take. Acres upon acres of razed ground, and rows upon rows upon rows of stumps of houses are seen.

I am fully aware that there are many, much more harrowing images of the aftermath of World War II. Nothing compares to how it really was. And, yet, watching these five 3D minutes, being well aware of the facts as they were, it suddenly had dawned on me that it was to that ruined city that my parents returned, the sole survivors of their two families, in 1945. There, in Warsaw, Poland, they started to build their life anew, a life to which I owe my own.

So there you have it, my own personal bias on Holocaust matters.