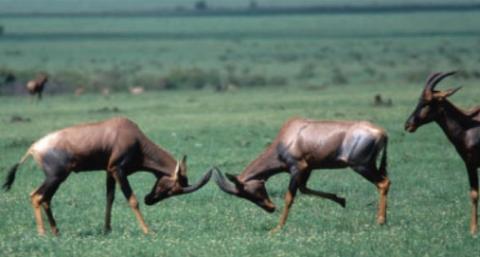 Human nature has a dark and violent side. And that means you too, ladies. A new set of studies suggests it’s a Mean Girls world out there, and aggressive competition may be rooted deep in evolution.

We humans are fascinated by women willing to duke it out. Witness Jerry Springer’s career. We love to hate women who go ballistic and throw chairs at female rivals. But we also tend to marginalize aggressive behavior in women, dismissing it as aberrant. As with many of the unsavory topics I write about here, we are mesmerized and yet repulsed. We can’t look away, but there’s little rigorous scientific study, perhaps because we are afraid to look too closely.

Evolutionary biology, for example, is often described in terms of nature “red in tooth and claw.” Yet aggression, and in particular aggressive competition for mates, has long been viewed as the domain of males. Sure, in many species the males put on spectacular displays of chest-thumping, all-out aggression. It’s the rams that ram, after all. But females have their own agendas, and their competition with one another can be no less fierce. Female topi antelopes head-butt in fights over males much like rams do, and female chimps sometimes even kill each others’ newborns.

But only after the sexual revolution of the 1970s did the phrase “competition among females” even begin to crop up with any regularity in books, anthropologist Sarah Hrdy points out in the introduction to an October 28 special issue of Philosophical Transactions of the Royal Society B. Review papers in the rest of the issue examine how females compete, and offer evolutionary explanations of behaviors ranging from maternal aggression in rodents to spreading rumors about sexual promiscuity by Homo sapiens.

An article about the “mean girl” effect is the most unusual in a journal usually dedicated to every species but ours. “Human females have a particular proclivity for using indirect aggression, which is typically directed at other females, especially attractive and sexually available females,” writes Tracy Vaillancourt of the University of Ottawa in Canada. This indirect aggression includes criticizing a rival’s appearance, social exclusion and rumor-mongering. These kinds of behaviors are what people usually chalk up as “cattiness,” but Villaincourt argues that it’s a pretty good strategy for mating, too. Unlike physical fights, there’s a low chance of injury, and a few studies suggest that young women who use indirect aggression (our “mean girls”) have sex at an earlier age and are more likely to be in a dating relationship than their peers — especially compared with the subjects of their aggression. This suggests that indirect aggression works, but keep in mind that there have not been many studies; both of these were fairly limited, based on surveys of around 140 girls each.

Anne Campbell of Durham University in England argues that women tend to engage in indirect aggression rather than risky fisticuffs because of their importance as mothers. A mother’s survival and well-being are too important to her children’s survival (and, by extension, mom’s reproductive success) to be risked in a brawl, the thinking goes.

It’s important to point out that Campbell is not just talking about individuals making fight-or-flight decisions in the moment, but about how evolution might have shaped women’s brains and physiology over many generations. She is arguing that motherhood could act as a constraint on aggression, so that women do compete, but in less lethal ways.

This manifests physiologically, she suggests, through women having a lower threshold for fear and better ability to rein in emotional behavior. There’s a bit of neuroscience that may back this up, with women showing greater activity in the amygdala (important in fear) than men when given a small fright. But as is common in evolutionary psychology, it’s hard to tell chicken from egg. Have women really evolved differently from men, or are researchers just picking up the effect of social conditioning that makes women more averse to violence?

Whether there’s an evolutionary explanation for women’s patterns of aggression is still very much an open question. Few studies have really tested hypotheses about any of this. Even this new set of papers contain little new data, since it mainly surveys the existing literature and pulls together ideas. Hopefully it’s at least a start in acknowledging the complexities of sexual competition and women’s role in it — and not just an excuse for a mean girls joke.