The Holocaust memorial that became a refuge for drunks and sunbathers 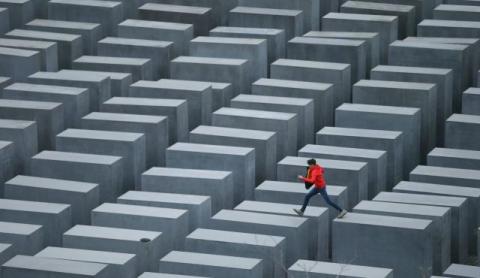 In January, Israel’s Arutz 7 news portal posted a video of what it described as “a gang of hooligans partying and urinating on the world-famous Holocaust Memorial in central Berlin on New Year’s Eve.” The story provoked many angry reactions in Germany, giving rise to demands for increased security at the site and for the installation of public toilets nearby. It also led some politicians to wonder why such behavior at the site was publicized solely by the Israeli media.

The Memorial to the Murdered Jews of Europe, as the site in the heart of the German capital is officially known, has drawn more than just streams of urine from inebriated revelers. The controversy and disagreement began even before its construction, starting with the memorial’s location, its form and who it should honor.

Since its dedication, the focus of the discussion has largely shifted to what constitutes appropriate behavior at the site. Because the site is so sprawling – comprising 2,711 concrete blocks spread over an area the size of two soccer fields – the memorial is not just a site for activities commemorating the Holocaust; it is perceived as a public park and a great place for hide-and-seek, taking selfies, making out, sunbathing, picnicking and napping.

All this continues to foster discussion in the German and international media about suitable behavior at the site, which in its nine years of existence has become one of the most prominent symbols of how Germany has coped with the crimes of the Nazi regime. It has become a popular tourist destination, as evidenced by the tourist shops and restaurants built on its eastern side and dubbed “Holocaust Beach” by the German press.

“The most threatening thing – which on the other hand is also the most promising thing – about the monument is those visitors who ‘don’t know where they are,’ as their behavior is described in the German media,” says Israeli sociologist Irit Dekel, whose book, “Mediation at the Holocaust Memorial in Berlin,” was recently published by Palgrave Macmillan Memory Studies. Dekel, 40, lives in Berlin, is a research fellow at Humboldt University and teaches at Bard College Berlin.

“These statements suggest a concern that not all visitors to the monument are committed to the work of remembrance in its conventional forms,” she says, adding, “The perception is that it’s okay to eat a sandwich at the monument, but it is wrong to drink beer on the stones or play music. At the same time, there is also an understanding that we’re talking about an open site where visitors can choose what to do, just as they can choose what to do with the memory of the Holocaust.”

Dekel’s book examines the Holocaust Memorial as an example of German remembrance efforts after Germany’s reunification and analyzes the diversity, the inconsistency and the social and political questions embodied in visits to the site and the discourse surrounding it.

“My interest in the monument began before it opened, after a scandal erupted in 2003 with the discovery that the company providing the material for coating the stones to protect them from graffiti had supplied the Zyklon B gas used by the Nazis in the death camps,” says Dekel.

“At first the discussion surrounding the site seemed strange, beginning with the official name chosen for it – the Memorial to the Murdered Jews of Europe – which relates to a very broad category, and the rocky road the project went through. To this we must add the monument’s vulnerability, and its power compared to other memorial projects in Germany, as well as the fact that it was planned to be the largest open abstract art installation in Europe, and in the center of Berlin, which is influenced by layers of history, primarily the remains of two dictatorships. I wanted to see what would happen when the site would be opened to visitors, especially in light of the concerns voiced in Germany that it would become a drawing point for right-wing extremists, a place where the memory of the Holocaust would not be honored and a place liable to mark and confine the discussion in Germany about this memory.”

The monument, designed by American-Jewish architect Peter Eisenman, was inaugurated in May 2005, marking the 60th anniversary of Germany’s surrender in World War II. Under the memorial is a subterranean information center designed by Dagmar von Wilcken, that deals with the persecution and extermination of Jews in Europe alongside other minorities persecuted by the Nazis, such as homosexuals and the Roma and Sinti (Gypsies).

Dekel conducted an extensive ethnographic survey at the site in the first year after it opened, and returned for another survey in 2010/11. She joined guided tours and workshops conducted by the foundation that manages the site; interviewed foundation executives, guides and security guards and talked with visitors to the site and examined their responses to their visit.

Because the monument is integrated into open urban space that is accessible around the clock, there are no exact figures on the number of visitors, but the underground information center gets half a million visitors a year, half of them German, and it is estimated that this number represents about 12 percent of visitors to the site.

Dekel says previous research on the site focused on the moral functions it is meant to fulfill and showed how it reflects broad processes of silence and denial in German society, as well as a process of healing. But following her own research, she sought in her book to digress from the discourse on the trauma and to point out that when one listens to the visitors and views their interactions with the place and with the guides, one doesn’t see any sort of intergenerational transmission of Holocaust experience or memory, but instead one hears what the visitors themselves feel at the place. They speak more about their own personal experience at the site, and only rarely about remembering the Holocaust, she says.

By distancing herself from the sacred filter of trauma in understanding the collective experience of Holocaust remembrance, Dekel was able to point to those who are excluded from the public memorial discourse and are not perceived as being able to participate in the memorial effort being carried out at the site.

“The initiators of the site and the German press understand the place as a major national Holocaust memorial aimed at Germans and built by Germans – second- and third-generation descendants of the Nazis – for themselves and the next generations,” she says. “This definition is very general and it took me a while to figure out who the site was not meant for. I would say that the site is aimed at anyone who is prepared to discuss Holocaust memory in metaphorical terms that meet two conditions: The visitor is supposed to say that he feels sad, and that he’s undergone a transformation. The younger the German visitors are, the more they talk in metaphorical terms of their desire to feel lost and sad at the site as a measure of the success of their experience there.”

Which groups are perceived as posing a danger to the site?

“One group is adult visitors who formerly lived in East Germany. Such people who visit tend to speak about their childhood memories, which include descriptions of anti-Semitism in their everyday lives. In response, the guides, who are third-generation Germans, accuse these visitors of anti-Semitism and opposition to democracy. This reaction surprised me; I thought it was good that visitors talked about the exclusion of the Jews, discussed it in a historical context and addressed the way they had been taught to fear or dislike Jews. But when I asked the guides why these stories angered them, they said that the place is not designed for the generation that has direct memories of the Holocaust era, and that such people still hold fascist opinions.

“The second distinct group, one which is invited to the site but is still considered dangerous is Muslim immigrants,” says Dekel, who notes that immigrants and their German-born children make up 20 percent of the German population; of those, some four million are Muslims (some 5 percent of the population).

“There’s an aspect of economic status at work here, because Muslim high-school students are discriminated against in advance because of segregation that leads them to vocational schools with other lower-class children,” says Dekel. “When these children come to the Holocaust memorial, the guides ask them questions that presuppose their possible victim status and mark them as the ‘Jews of tomorrow.’ For example, they ask them, ‘If your grandfather were murdered, wouldn’t you want him to be remembered?’

“The result of this attitude is that the German remembrance work regulates and reproduces German ethnic homogeneity, because it doesn’t allow those whose families were not in Germany in the 1930s to be included in the discourse of memory, which is also a discourse of national responsibility. Thus, Muslim immigrants and their descendants are not seen as legitimate and active carriers of Holocaust remembrance. Unfortunately, the memorial is not a place where the burning issues of hatred and exclusion of migrants in Germany or Europe today are discussed. The foundation managing it also recoils from comparisons with any other historical event in which minorities were murdered or oppressed.”

Grindr and the Holocaust

An unconventional link between the Jewish and gay victims of the Third Reich made headlines last year when the Holocaust Memorial was used as a backdrop for photographs of gay men posted on the Grindr gay dating site, under the headline “Grindr remembers the Holocaust.”

Dekel: “This was a very interesting initiative because it symbolizes the dual existence of gays who are also Jews or others, but not victims, and because thanks to the app, gays can find one another in the area of the monument. The German press marveled at the photos of gay men photographed in enticing poses between the stones of the monument and asked the app developers whether it constituted a cheapening of the Holocaust.

“But in contrast to other cases, this incident did not cause a scandal, because it was Israeli Jews who called for this type of remembrance, which combined three issues that are generally not discussed together in a Holocaust context: sex, homosexuality and irony.”