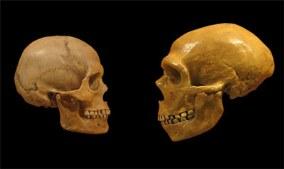 A traditional notion advanced about Neanderthals is that they were less cognitively capable and more disadvantaged than their early modern human counterparts some 40,000 or more years ago in Eurasia, explaining why they were driven to extinction while the modern humans flourished.

Neanderthals lived in Eurasia between about 350,000 and 40,000 years ago, but, according to the fossil record, seem to have disappeared after our ancestors, the anatomically modern humans (AMH), entered Eurasia from Africa some time between 125,000 and 60,000 years ago. Many researchers have theorized that the Neanderthal extinction was due to competition with the AMH newcomers, who had advantages like superior tools, weaponry, communication ability, and a broader diet, to name a few.

But not so fast, say two researchers.

Through an extensive review of recent Neanderthal research, CU-Boulder researcher Paola Villa and co-author Wil Roebroeks, an archaeologist at Leiden University in the Netherlands, make the case that the available archaeological evidence does not support the widely-held concept that Neanderthals were less advanced than anatomically modern humans. "The evidence for cognitive inferiority is simply not there," said Villa, a curator at the University of Colorado Museum of Natural History. "What we are saying is that the conventional view of Neanderthals is not true."

Villa and Roebroeks examined the most common scientific explanations or theories for Neanderthal extinction, such as technologically more primitive tools and weapons, lack of symbolic communication, a narrower diet, and less complex or less effective social organization. They did this by conducting a comparative study of the accumulated archaeological record of Neanderthals and anatomically modern humans, who lived in Africa and Southwest Asia between 200,000 and 40,000 years ago. They found the accepted theories did not stand up to much of the data.

For example, evidence from multiple archaeological sites in Europe suggests that Neanderthals hunted as a group, using the landscape to aid them. Research shows that Neanderthals likely herded hundreds of bison to their death by steering them into a sinkhole in southwestern France, for example. At another site used by Neanderthals, this one in the Channel Islands, fossilized remains of 18 mammoths and five woolly rhinoceroses were discovered at the base of a deep ravine. These findings imply that Neanderthals could plan ahead, communicate as a group and make efficient use of their surroundings, the authors said.
Other archaeological evidence suggests that Neanderthals did in fact have a diverse diet. Microfossils found in Neanderthal teeth and food remains left behind at cooking sites indicate that they may have eaten wild peas, acorns, pistachios, grass seeds, wild olives, pine nuts and date palms, depending on what was locally available.

Additionally, researchers have found ochre, a kind of earth pigment, at sites inhabited by Neanderthals, which may have been used for body painting. Ornaments have also been collected at Neanderthal sites. Taken together, these findings suggest that Neanderthals had cultural rituals and symbolic communication.

Villa and Roebroeks say that the past misrepresentation of Neanderthals' cognitive ability may be linked to the tendency of researchers to compare Neanderthals, who lived in the Middle Paleolithic period (300,000 to 40,000 years ago), to modern humans living during the more recent Upper Paleolithic period (between 50,000 and 10,000 years ago), when new and more sophisticated technologies were evidenced.

"Researchers were comparing Neanderthals not to their contemporaries on other continents but to their successors," Villa said. "It would be like comparing the performance of Model T Fords, widely used in America and Europe in the early part of the last century, to the performance of a modern-day Ferrari and conclude that Henry Ford was cognitively inferior to Enzo Ferrari."

But if Neanderthals were not technologically and cognitively disadvantaged, why didn't they survive?

The researchers argue that the real reason for Neanderthal extinction is likely complex, and that some clues may be found in recent analyses of the Neanderthal genome over the last several years. These genomic studies suggest that AMH and Neanderthals likely interbred and that the resulting male children may have had reduced fertility. Recent genomic studies also suggest that Neanderthals lived in small groups. All of these factors could have contributed to the decline of the Neanderthals, who were eventually swamped and assimilated by the increasing numbers of modern immigrants.

Thus, "the results of our study," conclude Villa and Roebroeks, "imply that single-factor explanations for the disappearance of the Neandertals are not warranted any more, and that their demise was clearly more complex than many archaeology-based scenarios of ‘‘cognitive inferiority’’ reviewed here seem to suggest."

The detailed study report was published April 30, 2014, in the open access journal PLOS ONE.