My father survived the Holocaust 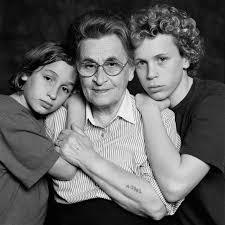 In the autumn of 2013 – a few weeks before my twins celebrated their third birthday – I took them up to our fifth-floor rooftop terrace to help load laundry into our washing machine. While my son was stuffing dirty clothes into the machine, my daughter ran back into our apartment, shut the door to the roof, and locked it. As she stood behind the glass door, laughing, I realized that I was now trapped on the roof with my son, with no phone, and my husband not due back from work until the evening. Although I asked my daughter over and over to turn the key back, the lock was stiff and she couldn’t do it.
I began to panic, conjuring up nightmare scenarios. I was afraid that my daughter would fall down or through a gap in the slatted stairs leading to the roof as I had (naturally) left the child-safety-gate open.
Then I looked over the railings and spotted some strangers walking through the little park behind our apartment block. “I’m stuck on the roof!” I yelled. I asked them to go and ring my neighbor’s bell, and five minutes later she came with our spare key, unlocked the roof door and rescued us.

I am so grateful for the kindness of strangers and neighbors, but when I look back upon this incident what I remember most clearly is the fear that my daughter would suffer some terrible accident from which I was unable to protect her.

I do not know whether I differ from other mothers in this respect, but I often wonder if my history as the daughter of a Holocaust survivor (my father, Gershon Glausiusz, survived Bergen-Belsen and was liberated by the Red Army at the age of 10) has made me overly-protective of my children and more fearful and nervous than other mothers.

This was brought home to me last summer after I wrote an article for the journal Nature about a study of children of Holocaust survivors conducted by Rachel Yehuda, director of the traumatic stress studies division at Mount Sinai School of Medicine in New York. In her study (of which I myself was a subject) she found evidence that children of Holocaust survivors may inherit a tendency to depression or Post-Traumatic Stress Disorder (PTSD) through epigenetic, or biological, means.

In brief, this means that DNA may be modified through the addition of chemical groups that turn on or off the “reading” of a gene. These changes, which may occur as a result of trauma experienced by the parent before the child’s conception, may be inherited by the next generation.

I was struck by something that Yehuda told me during one of several interviews. She said that mothers who survived the Holocaust often feared separation from their children. “When you’ve been exposed to a lot of loss and you’re very worried that you will keep losing loved ones, you may literally hang on too tight,” she said.

If my father had experienced post-traumatic stress, she explained, I myself was vulnerable to an inherited risk of depression. She added, “What that means is that you ought to be very careful about transmitting further to the next generation.”

I was born 19 years after the end of World War II. Both of my parents suffered during that war: My father, who was born in the town of Szarvas in Hungary, survived incarceration in Belsen, and my mother Irene, born in England, was sent away from her parents to live with strangers in Cornwall to escape the Blitz-bombing of London. She was three years old; her older sister, who accompanied her, was nine. By contrast, my own childhood was idyllic: I grew up in a large house with a big garden in North West London, in a big family of five children, with loving and attentive parents and grandparents, private Jewish high school and a free (government-paid) university education.

One of my most powerful childhood memories is arriving home from high school after an hour-and-a-half-long, two-bus journey, with lengthy waits at bus stops in the winter darkness. As I walked up the garden path, my father would often fling the door open and greet me joyously, as if I had gone away not for the day but for a month or a year. I did not realize why this was until a cousin of my father’s (also a Holocaust survivor) told me how happy she was to see her children at the end of the school day, as she was never entirely sure that she would see them again after they had left for school in the morning.

I came to motherhood late in life but sometimes, and especially when my kids were tiny babies, I have had this same feeling. My twins were born eight weeks’ prematurely and spent their first two months in the Neonatal Intensive Care Unit at Roosevelt Hospital in New York. As I have previously described, both experienced repeated episodes of bradycardia – a slowing of the heart rate common among preemies – during their stay in the hospital. For many months after their arrival home, I would creep into their room in the deep of the night, resting my hand upon their chests, feeling for the comforting thump-thump of their hearts and the rise and fall of their chests.

In this, I suspect, I am not so different from other new mothers. My kids, however, are now four years old, happy, healthy and robust. And I still tiptoe into their room at night before I go to sleep, listen to their breathing, and rest my hand upon their chests to feel the comfort of their heart-beats.

On a recent Shabbat, my husband and I were sitting together outside our synagogue watching our children play together in the courtyard. They ran onto an adjacent grass lawn just out of our sight, and as I watched them go my husband said, “You know, you don’t have to keep your eyes on them all of the time.”

“Yes, I do,” I replied, and walked off after them.

It is quite true. When we are in the playground, even if it is fenced in, I follow my kids’ movements like an eagle. It’s not that I fear falls or scrapes – I am unperturbed if my children slither head-first down the twisty slide or climb up it backwards. It’s just that if I cannot see my children, I am not entirely sure that they are actually there, or if they have disappeared – God Forbid – forever.

If I have inherited some form of trauma or depression from my father, then I worry that I might transmit my own anxiety to my children. But there is no way of knowing for sure whether or not I have inherited such symptoms, especially since people’s responses to trauma vary very widely. Some who go through terrible experiences – including war, rape, terrorism, violent assault or natural disasters – may indeed develop PTSD or depression; others may “develop mild to moderate psychological symptoms that resolve rapidly,” or experience no symptoms at all, according to a 2012 review of resilience in the journal Science.

How people respond to trauma – and whether or not they develop anxiety in the absence of trauma – depends on a range of factors, including genetic, psychological and developmental influences.

There is another aspect to surviving the Holocaust that is often overlooked. As Yair Bar-Haim, head of the School of Psychological Sciences at Tel Aviv University and director of the university’s new Center on PTSD and Resilience, recently told me, “Most people who experience atrocities somehow can function. They can build trust ... in this unstable, untrustworthy world that we live in.”

Vered Kaufman-Shriqui – who led a 2013 Ben Gurion-University study of PTSD in mothers and their children in Be’er Sheva in the wake of missile attacks from Gaza during the 2008/9 Operation Cast Lead – says, “Surprisingly or not Holocaust survivors are among the most resilient people I have ever met, although forever wounded.”

The best description of resilience, she added, “is one I heard on TV, in connection with a Timex watch commercial. The watch was described as having the ability to ‘take a licking and keep on ticking.’”

When I think of my father’s post-war life, it is the resilience of his existence that makes the most profound impression upon me. He and my mother built rich lives for themselves and for their children, sending us to Jewish schools – and all five of us to university – and were active in their synagogues and within the Jewish community in London. As my father told me recently on his 80th birthday, he strived to lead a normal life, “telling the children about the present and the future, and not too much about the Holocaust; in other words, keep the chip off their shoulders.”

Yehuda had told me that “you ought to be very careful about transmitting further to the next generation, and by making sure that you are not sending the epigenetic transmission down to the third generation,” by seeking treatment for depression and anxiety if I needed it. But what her work shows, she added, “is the fact that we do transit things to our children in many ways, and we can have an enormous influence, including a positive one, on their mental outcomes.”

The thought that I could pass on the positive aspects of my parents’ post-war experience to my children is a very comforting one. Last summer, toward the end of the 50-day conflict between Israel and Gaza, my parents came on aliyah. For my father, it was his second aliyah: He first arrived in the newly-established State of Israel on August 11, 1949, aboard the ship the “Negba.” He has told me how he and his fellow immigrants, refugees from Hungary, danced and sang on the deck of the ship before dawn on that day, as they saw the lights of Haifa in the distance. “It was like a dream that came true,” my father said.

I asked him to sing some of the songs he had sung on that day and throughout our childhood. They included the “Artza Alinu,” (“We came up to the land,”) and “Sham Ba-eretz Chemdat Avot,” a song composed in 1922 by Chanina Karchevsky (“There in the land that our forebears desired/All our hopes will be fulfilled/There we will live/There we will create a glowing life, a life of freedom.”) I also asked my father where he had learned these songs. He replied, “Mostly in Szarvas before the war, or in the camp,” and then described how he had sung them with groups of children in Belsen.

For me, this is the most amazing lesson of all – that even in the depths of despair, one is able to sing. When I listen to my father singing, or when I heard my mother singing to my babies when they were tiny, premature babies in hospital, and when I sing to my children and when I hear them sing, I remember that despite all the hardships that my parents have experienced, they have taught us how to be happy in this world. In the words of Psalms, sung in the Hallel prayer: “This is the day that God created; let us rejoice and be happy in it.”

This is the lesson that I hope to teach to my children.