France without Jews Is Not France 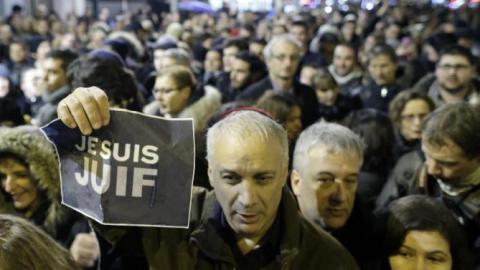 In his book, Considerations on the Government of Poland, written in 1772, Jean-Jacques Rousseau wrote that Moses “conceived and executed the astonishing project of creating a nation out of a swarm of wretched fugitives[.] …Out of this wandering and servile horde Moses had the audacity to create a body politic, a free people.” As a result of the nation’s devotion to the Law, it would, Rousseau said, endure to the end of time, in spite of the hatred and persecution of the rest of the human race.

That hatred and persecution of Jews, and the virus of anti-Semitism, has indeed persisted throughout history. The Jewish people in general and the State of Israel since it was established in 1948 have been subjected to this endless hostility. Today, Israel is the canary in the coalmine, the indicator of coming danger to democratic countries and of deterioration of conditions in the world. Jews have been the first target of hostile aggression in many parts of the world.

The role of the canary was recently displayed. The Muslim-incited kidnapping, torture, and later death of the Jewish Ilan Halimi in January 2006 and the murders of a teacher and children in a Jewish school in Toulouse in March 2012 were a prelude to atrocities against non-Jews as well as further attacks on Jews in France. The brutal massacre on January 7, 2015 of the staff of Charlie Hebdo rightly produced international outrage in the Western world. The murder of Jews in the Hyper Cacher kosher supermarket produced less universal condemnation. Indeed, among French Muslims, such as the students at Seine-Saint-Denis, there was jubilation rather than condemnation.

Once again, events in France have led to a moment when the place of Jews in Western societies must be considered. French prime minister Manuel Valls spoke of the new anti-Semitism in France that has come from French-born children of Muslim immigrants from the Middle East and North Africa. He held that the Israeli-Palestinian conflict was only just a pretext for this prejudice. There have been 8,000 anti-Semitic incidents since 2000, including 2,000 in 2014. By a trick of fate, France has the largest number both of Jews, the third largest in the world, and of Muslims in any European country.

Something profound has been taking place. Valls realized that more Jews are likely to leave France if the terrorist threat is not ended or diminished. His dramatic entreaty to prevent such an outcome was that France is not France without Jews. The French Republic in such a case would be judged a failure.

It is true that Jews have had a long experience in France going back to the early Middle Ages, but that experience has been mixed. They suffered persecution, mob violence, and blood libel accusations as early as 1007. Harassment of Jews intensified with the Crusades staring in 1096. Jews were exiled, 1306-1315, and again from 1394 until the 17th century. Some behavior towards Jews, especially during the Dreyfus Affair, 1894-1906, and the complicity in the Holocaust during the Vichy years, 1940-44, still haunts and divides the French people.

Yet if Jews have suffered persecution and death, they have also directly and indirectly played a role in French culture, and even in the formation of the modern French national identity. Defining the role of Jews in France was a crucial factor in the development of French citizenship and enlightenment. In the midst of discussions on freedom during the French Revolution, a decree on Jews was approved on September 27, 1791. By this, France became the first nation (technically the second, since Poland, five hundred years earlier, had issued a proclamation helping Jews) to grant emancipation and political, legal, civic, and social equality to Jews.

It was historically important in two ways. The decree led the way to Jewish emancipation in other European countries. More widely, it also symbolized and implemented the promises of freedom, progress, and toleration for the whole population promised in the French Revolution. The debate over Jewish emancipation was thus also a debate on French citizenship.

Yet for Jews, the emancipation was a mixed blessing, and its echoes are still with us. The dilemma was made clear in the famous speech on December 23, 1789 by Stanislas, Comte de Clermont-Tonnerre, during the discussions of the Jewish question. His formula is historically important: “As a nation (a corporate body) Jews must be denied everything; but everything must be granted to Jews as individuals.” Jews would be granted equal civil and rights and become culturally assimilated into French society, but their Jewishness would be confined to their private, religious views.

For Clermont-Tonnerre, there “cannot be one nation within another nation.” Jews as a historical group, as a distinctive people or nation, with a collective identity and communal autonomy, would not be recognized. In 1807 the Sanhedrin, the assembly of Jewish notables that had been convened by Napoleon the previous year, agreed that Jews had to accept the French state as their fatherland and adhere to French civic laws.

Jews not only obeyed the laws and assimilated into French society, but also helped spread French culture abroad, through such organizations as the Alliance Israelite Universelle, formed in 1860 to work for the emancipation and moral progress of Jews. The Alliance accomplished this, among other things, by highlighting and spreading French culture and language. Assimilated Jews, many calling themselves “Israelites,” regarded themselves as different from other French people only by their religion, not by any form of collective identity.

Prime Minister Valls asserted that Jews had played a central role in the life of France despite the fact that they were sometimes marginalized. Whether central or not, French Jews have been active in many sectors of modern French life and culture: Léon Blum, Pierre Mendes-France, and Jacques Attali in politics; André Citroen and Marcel Dassault in business; Francis Jacob and Andre Michel Lwoff, who were awarded Nobel Prizes for their scientific work; Proust, Paul Celan, and Patrick Modiano in literature; Isabelle Huppert, Simone Signoret, and Anouk Aimée on the screen; Raymond Aron, Claude Lévi-Strauss, Alain Finkielkraut, and Jacques Derrida in philosophy and social science; and even the Jewish Jean-Marie Lustiger, who converted to Catholicism at age 13 and became cardinal archbishop of Paris.

The historical problem in France is that not everyone agreed that Jews should be considered French citizens or should play a role in French life. One prominent writer and politician, Maurice Barrès, fiercely argued in this fashion. In the years during and after the Dreyfus Affair, Barrès declared that it did not matter whether the Jewish Dreyfus was innocent or not. He didn’t belong to the French nation, so how could he betray it? What France needed, said Barrès, were men rooted in “our soil, in our history, in our national conscience.” For him, Jews were rootless and thus not part of or true citizens of the French nation.

The question of whether Jews were members of the French nation was crucial during the Vichy years of World War II. That government participated in the Holocaust by allowing 76,000 Jews to be deported to Nazi death camps. The best that can be said of it is that it sent foreign-born Jews to their death before agreeing to the deportation of those who had French nationality.

The moment of truth for France is now at hand. Everyone is now conscious, as Valls said, of the anti-Semitism of the immigrant Muslim population as well as the residual discrimination against Jews. France already passed the Pleven Act in July 1972 and the Gayssot Act in July 1990, attempting to punish incitement to hatred, discrimination, racial insults, and denial of the Holocaust. But given the events of January 2015, France must take further pragmatic steps to deal with anti-Semitic behavior.

If Jews are to remain in the country, French officials must be more alert in dealing with manifestations of anti-Jewish discrimination, whether they are physical attacks on persons and institutions, the innumerable graffiti and swastikas in the streets, or problems in appointing Jews in educational institutions. Police have to be active, installing patrol units and cameras at synagogues and other Jewish places, especially at the 700 Jewish schools.

Above all, in the present climate, French authorities must formulate more effective programs to deal with the spread and impact of Islamist extremism, particularly in the school system attended by young Muslims. In this regard they should look again at the report issued by Jean-Pierre Olin, inspector of education, in June 2004, that pointed out the severe problem in the schools. They should be helped in their activities by the 89% of the French population who, according to the Pew Global Index, hold “favorable” views of Jews. Then Manuel Valls will not be alone in believing that France cannot be France without its Jews.