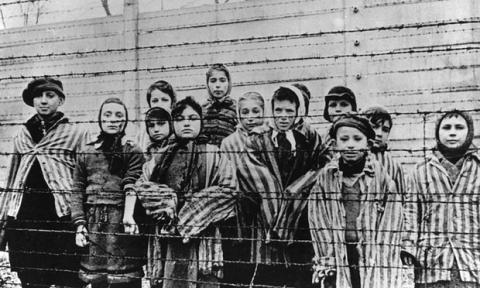 The trauma suffered by Holocaust survivors can be genetically transmitted to their children, a new study conducted in the U.S. has found. According to a research team at New York's Mount Sinai Hospital, led by Professor Rachel Yehuda, Holocaust exposure can induce intergenerational effects, which increases the incidence of stress disorders among children of Holocaust survivors.

Children in the Auschwitz-Birkenau concentration camp.

Yehuda's study compared the families of 32 Jewish men and women who had been imprisoned in Nazi concentration camps, underwent torture, witnessed it or were forced to hide during the Holocaust, to control groups of Jewish families who were living outside of Europe during World War II. The idea driving the study is still controversial as the common scientific assumption is that the DNA does not change. However, The chemical byproducts of an individual's lifestyle and habits can cause small changes in the individual's DNA.

If these changes recur in the individual's offspring, it could mean that factors like smoking, diet and psychological stress can influence future generations.

Yehuda and her colleagues focused on what is referred to as "epigenetic inheritance" -- the idea that environmental factors can affect the genetics of future offspring. Yehuda's team specifically examined one region of a gene linked to the regulation of stress hormones, which are known to be affected by traumatic experiences.

The team measured cytosine methylation in the gene FKBP5, learning that "the gene changes in the children could only be attributed to Holocaust exposure in the parents," as Yehuda said to British newspaper the Guardian. "The same correlation was not found in any of the control group and their children. To our knowledge, this provides the first demonstration of transmission of pre-conception stress effects resulting in epigenetic changes in both the exposed parents and their offspring," Yehuda said. "It makes sense to look at this gene, because if trauma does pass onto our offspring, it will be through stress-related hormones. This is an excellent opportunity to learn about how we adapt to our environment and how we might pass it on," she added.