Why people get more stupid in a crovd? 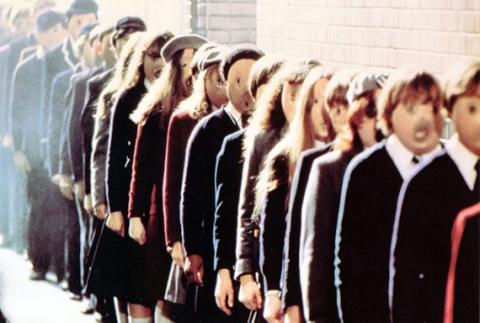 The downstairs room of a central London pub is not where most psychologists would choose to stage an experiment in decision-making, but for Daniel Richardson it is ideal. A researcher at University College London, he is interested in how people’s thinking is influenced by those around them – for example, whether seeing other people’s choices affects our own. For this he requires real-world settings where people mingle and socialise, rather than a psychology lab where they are typically quarantined.

Tonight around 50 of us are gathered in the Phoenix Arts Club in Soho to take part in one of Richardson’s “mass participation” studies. There is a jovial air, and he stands before us with his sleeves rolled up like a compere at a variety show. Yet this is serious science. We are each logged onto a specially configured website that enables us to move a dot around on our touchscreens, which moves a corresponding dot on a large screen at the front of the room. Our collective thoughts are up there for all to see (and for Richardson to measure). When everyone moves their dot, the screen resembles a swarm of agitated bees.

When we get the hang of it, he throws out his first test question: “Have you ever cheated on a test?” The ‘nos’ move their dots to the left, the ‘yeses’ to the right. We answer first in isolation, with all the dots hidden, and then as a group. What Richardson wants to know is whether the two conditions produce different results. Are we more honest when we answer alone? Do we change our story in response to others?

The main experiment begins – and now we are asked our opinions. “The UK should leave the EU,” proffers Richardson. Almost all the dots swarm left to no. “London tube strikes should be forbidden by law.” Much hovering of agitated dots as we all look for safety in numbers. “Someone who buys food for their friends has the right to take a larger share.” A collective gasp of outrage, followed by a surge to the left. But how many of us demur when the dots are hidden?

Unfortunately, the final results are not delivered on the night (they’ll form part of a PhD thesis). But Richardson thinks they will end up demonstrating the pernicious effects of conformity. The decisions people make as a group tend to be more prejudiced and less intelligent than the ones they make individually. “When people interact, they end up agreeing, and they make worse decisions,” he says. “They don’t share information, they share biases. We’re trying to figure out why that is, and how we can make collective decisions better.”

Richardson’s work on conformity follows a tradition in experimental psychology that goes back more than six decades. In the 1950s, the Harvard psychologist Solomon Asch demonstrated that people frequently adopt the view of the majority even when it is obviously wrong, and even when they have to deny their own senses. In the same decade, Read Tuddenham at the University of California found that his students would give ridiculous answers to simple questions – stating, for example, that male babies have a life expectancy of 25 years – when they thought others had answered in the same way.

Group conformity stands in marked contrast to the “wisdom of crowds” effect, whereby aggregating the opinions of large numbers of people gives answers or predictions more accurate than those of any individual. This happens only when members of a crowd make their judgements independently of each other, and it is most effective when a crowd is diverse. In cohesive groups, on the other hand, where members share an identity, the urge for unity overrides all. So when Richardson presents us with a picture of a killer whale and asks us how much the creature weighs, he’ll be better off taking the average of the answers we give independently, rather than following the scramble of dots on the screen.

That’s the theory. The data from tonight will help Richardson and his students test it, and explore the deeper issue of exactly how the presence of others alters our cognition and perception. He leaves us with a thought about social media: “We think of the internet as an information superhighway. It’s not, it’s a bias superhighway. Twitter and Facebook are wonderful ways of sharing information, but it may be that because we’re sharing our prejudices, they’re making us dumber.”