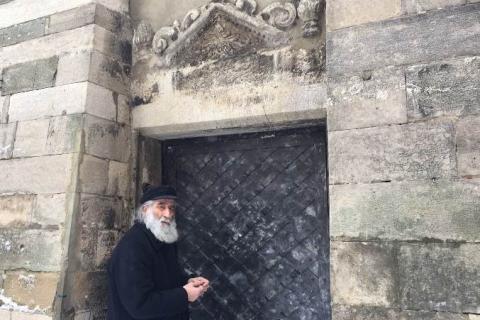 For decades, traces of the Jewish community that once flourished here were hard to find, all but wiped out by the Nazis, with help from local collaborators, during World War II. Now, this city is one of several places in Ukraine taking steps to remember that heritage, erecting memorials, holding commemorations and educating people about what happened here.

“It’s a huge part of our history. We have to learn about everything—pleasant and unpleasant things,” said Oleh Berezyuk, a national lawmaker and former deputy mayor of Lviv, the largest city in western Ukraine. “It’s a sign of our maturity as a nation to acknowledge this as our own tragedy.”

Meylakh Shykhet, a Jewish activist in Lviv, Ukraine, standing in front of the ruins of the former Golden Rose synagogue, which was blown up by the Nazis during World War II. The city government and researchers are creating a memorial at the site. PHOTO: JAMES MARSON/THE WALL STREET JOURNAL

That history had mostly been brushed over, and remnants of Jewish life disappeared. In Lviv, the surviving two walls of the 16th-century Golden Rose synagogue, blown up by the Nazis, were sealed off behind a fence. A market sprawled over a medieval Jewish cemetery. The site of a concentration camp was abandoned to nature. The fall of the Iron Curtain and reopening to the West spurred some countries in the region to re-examine their history and to preserve and rebuild remnants of their Jewish heritage.

In Poland, commemoration of the Holocaust started with relatively small projects before mushrooming with the help of the Jewish diaspora, said Sofia Dyak, director of the Center for Urban History of East Central Europe in Lviv. Such projects are spreading now in Ukraine as well, supported in part by public and private donors such as the American Jewish Committee and the German government. The push for remembrance comes at a pivotal time for the country, which is trying to move closer to Europe while resisting Russian military interventions on its territory. At the same time, it faces accusations from Moscow of resurgent fascism linked to the presence of far-right groups in politics and combat units fighting Russian-backed separatists.

Around one million Jews were killed during World War II on the territory that is now Ukraine. The Soviets largely ignored the genocidal nature of the Holocaust, referring to its victims generically as “Soviet citizens” and “civilians.” After independence in 1991, Ukraine concentrated on reviving previously taboo national narratives, such as the fighters widely seen as heroes here for resisting the Russians and the Poles. But some of those Ukrainian nationalists also collaborated with the Nazi German invaders and were involved in the killing of Jews.

A few Ukrainian fighting units and parties today have adopted nationalist insignia and flags, which Russia uses to tar the Kiev government as a whole. “Without having a clear history, people distort it,” said Yaakov Dov Bleich, a leading rabbi in Ukraine. “No one [in Ukraine] respects nationalists because they killed Jews, but because they fought for independent Ukraine.” As part of “becoming more democratic, more European,” Ukraine is beginning to re-examine its past, he said.

Lviv, the largest city in western Ukraine with about 720,000 people, is among the leaders. A new project will transform the area around where the Golden Rose synagogue once stood into a rare green space amid the bustling town center’s cobbled streets. A fence, a parking lot and a restaurant terrace have already been removed. Construction work should be completed by fall, including stone tablets bearing historical quotes from Lviv Jews from all walks of life.

The initiative has strong support from the municipal government, which is footing about a third of the €300,000 ($342,000) bill. But some critics say the project doesn’t respect the religious significance of the site or go far enough. Meylakh Sheykhet, a Jewish activist in Lviv, would like to see the Golden Rose synagogue itself restored, not just remembered. “We want to restore history to show tolerance and build bridges,” Mr. Sheykhet said. “We don’t want memorials for people to come and cry.”

Local Jewish organizations say there are several thousand people in Lviv today with Jewish roots, many of whom are secular, and one restored synagogue. Ms. Dyak from the Center for Urban History, a partner in the project, said the Golden Rose synagogue could still be rebuilt at some point, but the cost, for now, is prohibitive.

Mr. Sheykhet, Ukraine director for the Washington-based Union of Councils for Jews in the Former Soviet Union, has spent years in court battles with developers and local authorities in Lviv and elsewhere, trying to preserve Jewish heritage. He says the Golden Rose project is aimed more at boosting commercial interests around the square. One well-known, Jewish-themed restaurant nearby has drawn complaints—including from Mr. Sheykhet, Jewish news outlets and some customers—for promoting stereotypes with quirks such as encouraging haggling over the bill.

A Lviv city official said the project would prevent encroachment of hotels and restaurants on the site. Ms. Dyak said its central location should prompt people to think about the multicultural history of the city, which for centuries was part of Poland and the Hapsburg Empire. “The official narrative of history in Ukrainian text books is very Ukrainian-centered,” she said. “The project provides the possibility of thinking in other ways about our past.”

Another initiative has put memorials at mass gravesites and in five nearby villages last year, with plans for five more. School children held an essay competition and whole villages came out to listen to speeches when the plaques were unveiled. “People should know that in Ukraine there were heroes, victims and criminals,” said Anatoliy Podolskiy, director of the Ukrainian Center for Holocaust Studies, which helps educate teachers.

Ukraine is planning a major effort in September to mark the 75th anniversary of the massacre at Babyn Yar outside Kiev, where more than 30,000 Jews were killed over two days shortly after the Nazi occupation. The central government will spend 30 million hryvnias ($1.2 million) to build a memorial for those killed as well as Ukrainians who helped save Jews. Organizers say they hope it will draw more and lasting attention to the site.

“There is momentum, but not enough,” said Rabbi Bleich. “It’s never too late.”