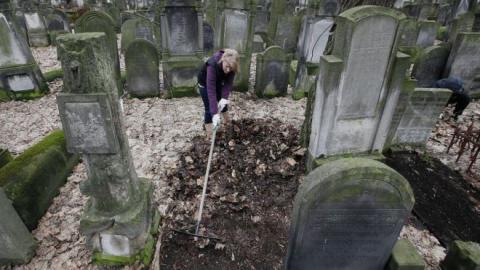 Representatives of all the organizations in Israel and worldwide dealing with the restoration of property stolen from Jews during World War II and the Holocaust met last week at the Foreign Ministry in Jerusalem. It was the first time that Israel had provided such a platform, to urgently move ahead on the issue given the advanced age of most of the survivors: half a million people, 190,000 of whom live in Israel.

A Jewish cemetery in Warsaw, Poland is evidence of a once-thriving community. Photo AP

The conference, also under the auspices of the Senior Citizen Affairs Ministry, attracted many participants. Among them were officials especially appointed to handle this matter from Greece, Germany, the Czech Republic, Britain, the United States and Macedonia, ambassadors in Israel, particularly from the European Union, representatives of government ministries and survivors’ organizations. Particularly prominent were participants from the World Jewish Restitution Organization, participants from the Claims Conference from the United States, and envoys from an organization established in Prague in 2010 by the Czech Foreign Ministry, the European Shoah Legacy Institute, the latter based on the Terezin Declaration passed in 2009.

During the conference, the European Shoah Legacy Institute launched a database and app for legislation in this area. There may be an advantage in the fact that the organizations and those in charge, Jews and non-Jews, are approaching the issue from different angles and different countries, but it would be better if, at the same time, they could be clustered under one roof with a single coordinator.

In Western and Central Europe the move to restore Jewish property or offer compensation began as early as the 1950s. It grew in the 1990s, after archives in Europe opened and the extent of the theft became known. However, in most of the countries of Eastern Europe the lion’s share of Jewish property has yet to be returned, both private and community-owned.

Only now, in 2016, have real steps been taken in this direction in Romania, Serbia and Latvia for example. Most of the Jews of Europe lived in Eastern Europe and it was there that property was stolen by the Nazis and subsequently nationalized or confiscated under Communist regimes. After these regimes fell and the transition to privatization began, the property was sold to new owners in the 1990s, as part of the process of democratization and the desire to join the European Union, which conditioned membership on a properly functioning real estate market.

Restitution of property was recognized as a right by the European Court of Human Rights, which has already heard many suits. Restoration of stolen property, the most justified of demands, also engenders resentment. Even when governments discuss the possibility of returning the property, the public sees the demand as unjust: People regard the countries and economies of Eastern Europe as recovering slowly from Communism and wonder how they will be able to cope with compensation payments and restitution of property. The real estate market would suffer a shock, because Jews were not the only ones who were robbed or deserve compensation, and the owners of the property today are not the ones who stole it. People regard the Jewish people of today as mostly living in countries with well-developed economies, including Israel, and believe they should wait.

In this context, particularly prominent is the lack of a restitution process for private property in Poland, where some 3.3 million Jews lived, 10 percent of the population – the largest Jewish community in Europe. Any proposal for an agreement on the matter has been repeatedly rejected by successive governments. The current government, leading a tough nationalist line, is not likely to agree to this painful process: Populist sentiment in some classes deeply fears masses of Jews coming back to claim their property.

Half the community property in Poland is also still waiting for resolution. Perhaps precisely because of the extent of the problem, no law has been passed on general restitution of property throughout the country (laws have been passed only in a few places, such as Warsaw and areas in the Bug River region).
There have been more than 12 bills proposed so far on restitution of property, and they were all struck down. One of them was even blocked, in 1999, by the president, claiming that the cost of returning assets is estimated at some $70 billion (Jewish organizations say this estimate is exaggerated, and the true figure is about half of that).

Despite proposed legislation that offers a variety of solutions, including compensation instead of restoration of property, none of the proposals have been accepted, and Poland insists that heirs to assets present regular lawsuits. But the number of such suits that have been granted by the Polish courts is very small. Such conduct was sharply criticized by the European Court of Human Rights in 2008. Poland is a strategic ally of Israel and the United States as well as other countries in Eastern Europe and therefore there may be no solution to the problem until the highest levels, especially in Israel, negotiate on the restoration of property as a high priority in the near future, as long as the survivors can still assist.

The participants in the conference made it a goal to work together closely, to promote rapid legislation, especially in countries where the matter has not yet been regularized, and to return property or offer suitable compensation. The EU and the European Parliament were asked to help – for example, by re-ratifying the Terezin Declaration (after which restitution of property did not move ahead very much), appointing a special coordinator and assisting in the preparation of the next international conference in Brussels, capital of the EU.

The heart of the matter is not specifically the amount of compensation, but rather aspects of the moral obligation to the survivors and the dead, to memory and identity, the link of families to their roots and repairing a historic injustice.