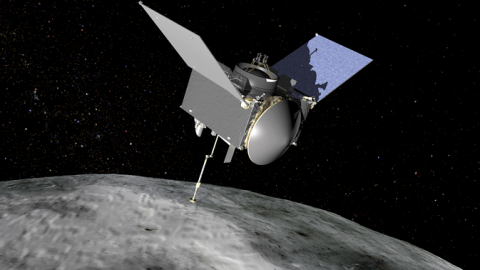 Bolted to the top of a United Launch Alliance Atlas V rocket, NASA’s OSIRIS-REx spacecraft will lift off on Thursday to study an asteroid and return to Earth seven years later with a sample for first-hand analysis. The OSIRIS-REx spacecraft is scheduled to orbit, map and collect samples from near-Earth asteroid Bennu. The spacecraft will be boosted into orbit from Space Launch Complex 41 at Cape Canaveral Air Force Station in Florida at 7.05 p.m. After arriving at Bennu in 2018, the 2,110-kg fully-fuelled spacecraft will spend over a year exploring the asteroid before approaching its surface to grab a sample.

This pristine material, formed at the dawn of the solar system, will be brought to the Earth in 2023, providing clues to Bennu’s origins and our own. NASA, the US space agency is set to launch its first mission to return a sample of an asteroid to Earth on September 8 from Cape Canaveral Air Force Station in Florida. The mission will help scientists investigate how planets formed and how life began, as well as improve our understanding of asteroids that could impact Earth,

“The launch of OSIRIS-REx is the beginning of a seven-year journey to return pristine samples from asteroid Bennu,” said OSIRIS-REx Principal Investigator Dante Lauretta of the University of Arizona, Tucson. “The team has built an amazing spacecraft, and we are well-equipped to investigate Bennu and return with our scientific treasure,” Lauretta said in an earlier statement.

After a careful survey of Bennu, OSIRIS-REx will collect between 60 to 2,000 grams of surface material with its robotic arm and return the sample to Earth. OSIRIS-REx stands for Origins, Spectral Interpretation, Resource Identification, Security-Regolith Explorer.