Babi Yar A Tragedy For All Ukrainians 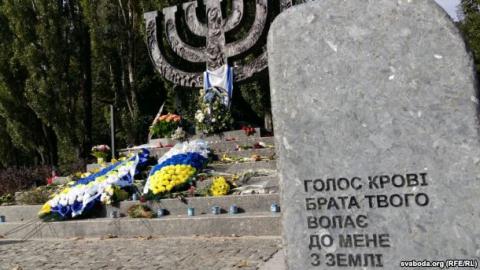 U.S. historian Timothy Snyder says there are several lessons to draw from Babi Yar, where more than 30,000 Jews were killed by the Nazis on September 29-30, 1941. One is that it was a tragedy for all Ukraine. Another is that we must stop thinking about people in terms of ethnic categories or be doomed to repeat the mistakes of the past.

Snyder, a professor at Yale University and an expert on the history of Central and Eastern Europe and the Holocaust, spoke with RFE/RL's Ukrainian Service correspondent Natalia Churikova in Kyiv, in Ukrainian. The following is a translation:

First of all, we have to remember that Ukrainian Jews lived on the territory of Ukraine hundreds of years before the Soviets and before the war. Secondly, Jews along with all other Ukrainians lived through, for instance, the Holodomor [the mass famine of the 1930s]. Some Ukrainians have said that Holodomor is our tragedy and the Holocaust is the tragedy of Jews. That is not completely true, because during the Holodomor, many who lived on Ukrainian territory, including Jews, Russians, Poles, and others, were annihilated.

Some local residents came together with Nazi troops and took part in organizing the mass killings in Ukraine, assisted in those killings. How do you explain that?

First of all, we have to note that the Babi Yar killings were organized by [the Nazi] Einsatzgruppe 4A along with two groups of police.

However, from the very beginning, and that is true, some local residents, Ukrainians -- not only ethnic Ukrainians but also Russians, Tatars, and others -- collaborated. Some people from each ethnic group collaborated. The situation was that the German initiative [against the Jews] became possible because not only the SS, but the German Army, the German administration, as well as the German police cooperated with each other. And gradually, the Germans realized that there were also people among local organizations that were ready to cooperate.

Why did the Stalin regime decide to wipe out from memory the fact that it was mostly Jews killed at Babi Yar?

Do you think Ukrainians will be able to accept the Holocaust as their own tragedy in the future?

Snyder: Yes, I agree with that. I think it is necessary. If people look at their history and understand it only in terms of ethnic categories, then they will not be able to see others as fellow members of their nation, either now or in the future.