A Zionist vision constructed one building at a time 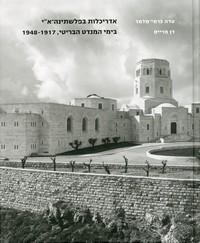 Architecture in Palestine during the British Mandate, 1917-1948.
By Ada Karmi-Melamede and Dan Price,
Published by the Tel Aviv Museum of Art, 471 pages, NIS 280

This detailed study of the architecture of the Mandate period reveals complex ideas about buildings as symbols of nation building and challenges claims about the famous International style that turned Tel Aviv into the "White City".

In the first half of the 20th century, Israeli art didn’t exist in an autonomous space. Artists were expected to contribute to the mission of nation-building and the dramatic events that defined the period cast a shadow over artistic practice. Formalistic concepts that focused on shape rather than content were pushed aside.

This was particularly apparent in architecture, a field used from the outset as a means of representing the Zionist vision. In light of this history, Ada Karmi-Melamede and Dan Price's book on the subject is a real breakthrough. Written with the help of a team of architects and researchers, the book gives a formalistic analysis of the architecture of the era, interpreting the work not in terms of style, symbols or ideas but rather breaking down construction into its independent elements, much as words are broken down in syntax. The book is a broad methodical study which analyzes Jewish construction during the British Mandate, aiming to use objective and universal tools to “get to the bottom of the forms of the local dialect".
Karmi-Melamede initiated this study in 1984 but admits in the preface that, despite the great time and effort invested in collecting and analyzing data, there isn't a clear formula or one conclusive generalization, or even broad-ranging theoretical definitions to be found in the book. Instead, most of the short bits of text explain the processes of the physical designs, focusing more on practical considerations.

The book is not a technical documentation of the period’s architecture but its collection of photographs (some previously unpublished), sketches and interpretations, is enough to give the book the status of a comprehensive basic study. Between the sketches and the sentences also lies a new interpretation of Israel’s architectural history that offers a renewed connection to the original context.

Despite the warning in the preface, the book does offer quite a few general conclusions. First and foremost, Karmi-Melamede accepts the argument that the unique physical, cultural and societal circumstances in British Mandate Palestine created a type of "modified" modernism, which did not blindly adopt the modernist edicts which had already become international principles by that time. This was a type of architecture not born from a defined theory, but which eventually became a symbol of national renewal and collective ideals.

The book is divided into chapters, each dealing with fundamental questions. The first chapter; "Architectural Precedents," mainly focuses on the 1920s but also introduces two old structures– the Khan al-Umdan in Acre and Nabi Musa south of Jericho. That decade was still dominated by an eclectic historical language, though it was already displaying the first signs of modernist language, such as in Austen Harrison's Rockefeller Museum and High Commissioner's Residence in Jerusalem and Alexander Baerwald's Technion University campus in Haifa.

The second chapter is dedicated to the consolidation of Israeli modernism in the 1930s, a decade when modernist principles and manifestos were imported from Europe and translated into the local environment. The third chapter, "Hybrid Modernism," is demonstrates the abilities of some leading architects – including Erich Mendelsohn, Leopold Krakauer, Sam Barkai, Lucian Korngold and Samuel Bickels – to free themselves from these imported principles and plan multilayered buildings. These buildings created a fascinating synergy between the universal and the local; between timeless architectural principles and the needs of the modern age.

The main part of the book is dedicated to defining the large wave of construction during the 1930s and analyzing the common factors common factors in the public and private buildings in Israel at the time, designed by architects who had arrived from a variety of places. Even though the book doesn’t come to many new conclusions, it substantiates existing ones with an examination of the design characteristics using measureable parameters.

In contrast to the first and last chapters – which are dedicated to specific buildings – the main segment of the book focuses on general characteristics. From the authors' point of view, the most prominent feature in 1930s’ building was the balconies. This deviation from the modernist principles of flatness and lightness was mainly due to climate considerations. The heavy stone walls of Arab-style construction were replaced in favor of strips of balconies that provided cover for small entrances. This gave the buildings the look of a uniform horizon while creating a space in between that was protected from the sun, adding depth and interest. The vertical effect of stairwells was emphasized, the roof became a communal area for the building's occupants and the courtyard allowed a transition from public to private space. In the book, these characteristics are seen as common features that connect the work of different architects.

Karmi-Melamede and Price are also aware of the social-cultural philosophy behind the designs, which included collective ideals of modesty and simplicity, rejecting individualistic statements and monumental demonstrations of scale even in public buildings.

One of the new and most important conclusions of the book challenges the myth of buildings on stilt columns, which are considered to be a significant feature of the “Bauhaus” or International style which gave Tel Aviv it’s famous "White City” nickname. The book’s analysis shows that, like Jerusalem and Haifa, buildings in Tel Aviv tended to be very strongly connected to the ground.

"The white buildings looked light but they did not float," write the authors, adding that "most of the buildings from the period sat on the ground with their full weight," a description they relate to the nation building taking place in Israel at the time, like a physical attempt to take root.

Blending past and present

These, and other conclusions, are not unusual in the legacy of formalism. Karmi-Melamede, who worked in New York during the 70s, is influenced by the burgeoning formalist theories during those years, which were part of the reaction against functional modernism. Indeed, when formalism was consolidated back in the 19th century, it was meant to provide architectural analysis with a scientific basis, thus distinguishing the areas of creativity and distilling the uniqueness of each. But even then, hidden behind the "pure reading" of dimensions and proportions were attempts to discover timeless abstract ideas.

Karmi-Melamede and Price aren’t content merely to expose construction values or analyze geometrical structures, traffic routes, the effects of light and shade, the thickness of walls and so on. It’s no wonder that some of the drawings and diagrams are abstract compositions, meant to express the authors’ personal interpretations, which reveal the complex relationships between the buildings and their surroundings. They not only point out classical proportions in modern buildings and rich interiors disconnected from functional exteriors, but also principles such as the “golden ratio,” which has connected architecture to the laws of the universe since ancient times.

Architectural depth and complexity and the authors’ world view can be seen in the last part of the book. Their understanding of hybrid modernism assumes that the architecture of the Mandate-era was created by professionals able to rise above minimalist and functionalist codes to create modern architecture that managed to translate an abstract language into one that blends past and present.

Part of Karmi-Melamede and Price’s intention is to illustrate the common thread between buildings such as Erich Mendelsohn’s Schocken villa, Samuel Bickels’ Museum of Art in Ein Harod and Leopold Krakauer’s dining hall of Kibbutz Tel Yosef and the traditional architecture of the 1920s that the first chapter explored. Thus the authors identify a language created during the Mandate simultaneously by British and Jewish architects that connected the “local dialect,” with complex spaces and a feeling of “time standing still.” As far as the authors are concerned, this model should serve as the basis for contemporary architecture.

One may disagree with some of the ideas put forth in the book and wonder about the lack of references to previous studies that reached similar conclusions. And despite the high quality design by Michael Gordon, the written texts could do with a further edit. Even the analysis pieces often miss a wider historical background. For example, there is no mention of the influence of modern organic architecture, like Frank Lloyd Wright’s school of design (good examples of this are the familiar floating roofs of Richard Kaufman and Heinz Rau). Another architect who has been forgotten is the British designer Edwin Lutyens, who managed to connect the principles of “arts and crafts” to neoclassicism, and had a great influence on the architects of the British Mandate.

Treating Palladio’s legacy as almost the only source of modern neoclassicism greatly simplifies the subject. Most of all, the formalistic approach allows the authors to ignore how the neoclassicism of the early 20th century represented the blossoming of national movements at the time.

But all this should not diminish the importance of this study, which highlights the difference between meaningless building and valuable architecture. It offers new possibilities for addressing the local architectural language and demonstrates the way architecture expresses abstract ideas through complex constructions. For Israeli culture, it provides an important model in which painstaking research allows theories and ideas to stand on solid foundations.