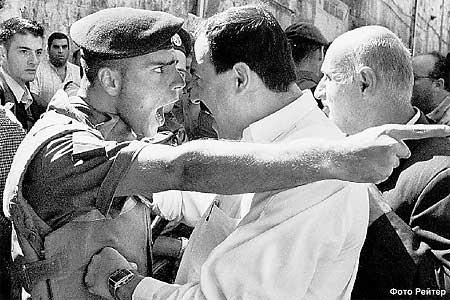 It is a lie to claim that partition is no longer possible. It is squarely against the interests of Israelis and Palestinians to claim that the two-state solution is dead. Neither one of us is willing to concede the right of self determination.

A day doesn’t go by when I am not asked “isn’t the two-state solution dead?” Today I was asked twice. A former staunch Israeli supporter of this solution called me this evening and said he wanted to begin talking to Palestinians about other options because “it is too late to move the settlers out of the West Bank, they are there to stay and we have to find some way to live together.”

Another long-time two-stater wrote, “While I agree that there is no other solution than two states for the two people, the conflict will continue. The Israeli peace forces are not strong enough to counter the official policy. The international community is rhetorically unequivocal, but says it cannot press [Prime Minister Binyamin] Netanyahu for substantial compromises against the will of the large majority of his people.”

According to Benvenisti, the settlers and the settlements are there to stay (and so are the Palestinians). If what the Israeli public is beginning to accept is true, that Israelis will continue to live in the West Bank forever, then it will be very soon that the international community comes to the same conclusion. The Palestinian public is catching on as well, coming to the (false) realization that their dream of independence and statehood will not materialize and therefore they should cease talking about a two-state solution.

This is what is happening in the West Bank. The Palestinian leadership will continue to carry the torch of Palestinian nationalism until the torch is extinguished by the Israeli right wing, led by Netanyahu and Foreign Minister Avigdor Liberman and supported by Interior Minister Eli Yishai and others from the religious camp.

The Arab minority in our state, who are Palestinians, must enjoy not only full civil rights but also must be able to find their expression of the national identity within the state which is also theirs. Israel can be the Jewish nation-state and democratic. Israel can be the state where the Jewish people find the territorial expression of their identity. It can also be the state where the Arab Palestinian minority can find an expression of their identity and be free to express it while continuing to be law-abiding Israeli citizens. Those Palestinian Arab citizens of Israel who wish to live in their own state can move a few kilometers to the east and live in Palestine, next to Israel. It should be possible for them to even maintain dual citizenship – if the two state are at peace.

In the same way it should be possible for Jews who prefer to live in the non-annexed settlement blocs in the future and wish to remain in the heartland of Judea or Samaria that will be part of the Palestinian state to remain in Palestine as a Jewish minority enjoying civil and national minority rights. They too could hold dual citizenship.

It is a lie to claim that partition is no longer possible. It is squarely against the interests of Israelis and Palestinians to claim that the two-state solution is dead. Neither one of us is willing to concede the right of self determination.

The two-state doubters claim that we can create forms of a confederation, cantons, districts which are part of a federal or con-federal state where the district can be homogenous. These cantons joined together can form the state whose borders are from the River to the Sea and each district can have some form of autonomy.

Really? Who will really accept this? Will Jews give up their sovereignty, their right of self determination to a body of cantons? Will Palestinians give up their basic right to self-determination, their right to determine their own destiny? Confederations and federations are agreements between sovereign states which decide to give up their sovereignty in order to be part of something larger, meaning that the gains for joining are clearly larger than the losses for not joining.

The European Union is a good example; 27 sovereign states decided to give up large portions of their individual sovereignty in order to be part of the EU. Would Israelis and Palestinians be willing to divest parts of their sovereignty at this time to be part of some kind of Israetin or Palesrael? This is where the settlers and the government which supports them are driving us. This is no less than a crime against the people of Israel and the Zionist movement.

The settlers and the government which supports them may think at this time that they have won the battle, but they are bringing us all to a tremendous defeat. They and we will all wake up to the reality that we have created a monstrous mess in which we will not be able to keep our total dominance over millions of Palestinians.

This will not work. This make-believe reality of the non-invincible Jewish state which defies the world and international law without regard, with total impunity, will not last. Their lies will be uncovered and the reality will blow up in our face. Their crimes will be the catalyst for the next round of violence and the blood of thousands of casualties will be on their hands. Yes, I accuse.

I accuse because I can no longer be silent. The State of Israel and the Jewish people are too dear to me to stand by and watch as the settlers and their supporters in the Israeli government continue to march us down the road of national suicide, doom and destruction. It is time to open eyes. It is time to call the game over.

The two-state solution with annexation of most of the settlement blocs in exchange for equal land inside of Israel proper can still be accomplished. Soon, it will be beyond possible. Four or five percent land swaps are doable, but not much more than that. This is the only way to save the State of Israel and the Zionist enterprise. Do not be deceived by the settlers implementing what they call Zionism, it is not. It is nothing more than Zionist fantacide.

The writer is the co-chairman of IPCRI, the Israel Palestine Center for Research and Information, a columnist for The Jerusalem Post, a radio host on All for Peace Radio and the initiator and negotiator of the secret back channel for the release of Gilad Schalit.