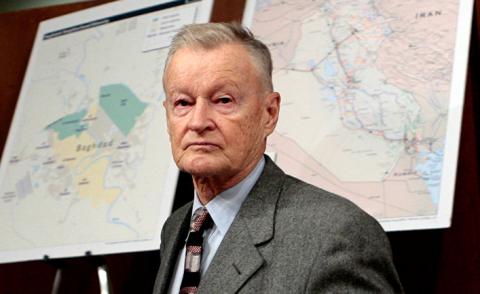 Zbigniew Brzezinski, the combative, visionary foreign policy intellectual who helped bring Jimmy Carter to the White House in 1976 and then guided him through a series of international crises that contributed significantly to Carter’s defeat at the polls four years later, died May 26 at a Fairfax County hospital. He was 89.

The Polish-born strategist became a lightning rod for criticism over the roles he played in the Iranian hostage crisis, a broad but unrewarding diplomatic confrontation with the Soviet Union, and Carter’s innovative but unevenly implemented human rights policy. Dr. Brzezinski’s admirers focused on achievements that ­included the full normalization of U.S. relations with China, an ­expanded American role in the Middle East that produced an Israeli-Egyptian peace treaty, and skillful involvement behind the scenes that kept Poland’s 1980 Solidarity revolt against Communist rule alive and effective. The author of more than 30 crisply argued books, Dr. Brzezinski gradually moved away from the strident advocacy of military power and the need to show resolve that made his reputation as an anti-Soviet hawk during his tenure as Carter’s national security adviser.

Once a muscular advocate of U.S. escalation in Vietnam, he gradually came to put more emphasis on the need to be diplomatically and politically supportive of nationalist aspirations in developing countries. He strongly opposed the 2003 invasion of Iraq. The undeclared border war between Russia and Ukraine led him in 2014 to caution that the West should not bring Ukraine into a military alliance. That risked greater, more dangerous complications with Moscow, he argued. But Dr. Brzezinski maintained that there was more continuity in his thinking than was apparent. “I didn’t have the time to correct distortions or misunderstanding of complex ideas,” he said in a 2014 interview on his career. “In any event, when I was in the White House, it helped me sell our positions to the real hawks in the administration. I took a lot of criticism that would otherwise have been focused on the president.”

Quick of wit and with words and unwilling to back away from a fight of any dimension, Dr. Brze­zinski was a captivating lecturer at Harvard and then at Columbia. As his powerfully written memoir, “Power and Principle,” made clear in 1983, he was driven by a lifelong determination to bend leaders and events to his fierce will. “He does not seem to realize how often his candor, when directed at others, looks like malice and, when directed at himself, looks like shameless egotism,” journalist Strobe Talbott, a future deputy secretary of state and Brookings Institution president, wrote in his review of “Power and Principle” in Time magazine.

Dr. Brzezinski also struggled in vain to move out of the shadow of another European-born academic-turned-policymaker. The New York Times did not resist making a self-fulfilling prophecy by noting in reporting his nomination to head Carter’s national security staff: Dr. Brzezinski “will come to his White House job superbly prepared, as prepared as his predecessor, Henry A. Kissinger, with whom he will be always be compared.” As well as foreign accents, the two shared a taste for celebrity and control of the policy process that previous national security advisers had largely eschewed. And both initially made their reputations at Harvard by arguing that threatening the limited use of nuclear weapons might be a more effective policy instrument than was the then-controlling doctrine of “massive retaliation.”

Always ready to do battle with bureaucratic and ideological opponents, Dr. Brzezinski placed equally strong emphasis on developing warm personal relationships with world figures he respected. “The two greatest foreign leaders I dealt with were China’s Deng Xiaoping and Pope John Paul II,” he said in 2014. He had been in touch with John Paul since 1976, when he was Cardinal Karol Wojtyla, and used that contact with the Polish-born pope to help mobilize European opposition to counter the risks of a Soviet invasion of Poland in 1980.

From Poland to America

Zbigniew Kazimierz Brzezinski was born in Warsaw on March 28, 1928. Ten years later, his father, Tadeusz, a diplomat from an aristocratic Catholic family, was posted to Montreal as Poland’s consul general. The temporary assignment turned into extended refuge for the Brzezinski family as Poland was invaded by Germany and the Soviet Union, partitioned, and then absorbed into the Soviet empire after World War II. “Zbig,” as he was called throughout his life, took an early interest in Russian culture and diplomacy, his parents recalled.

After obtaining a master’s ­degree in political science from Montreal’s McGill University in 1950, he enrolled in Harvard and received a doctorate in government three years later. One of his mentors was Merle Fainsod, a leading specialist on Soviet political persecution. Dr. Brzezinski taught in Harvard’s government department until 1959, when he moved to Columbia. He was soon named a full professor and became director of the Research Institute on Communist Affairs. Once challenged by a student there on his failure to foresee Soviet leader Nikita Khrushchev’s removal from power in 1964, Dr. Brzezinski shot back: “Listen, Khrushchev didn’t predict Khrushchev’s overthrow either. How could I have?”

In 1955, Dr. Brzezinski married Emilie Benes, a sculptor and grandniece of Eduard Benes, who served twice as president of Czechoslovakia. Besides his wife and daughter Mika, an MSNBC host, survivors include two sons, Ian Brzezinski and Mark Brzezinski. After becoming an American citizen in 1958, Dr. Brzezinski was active in the Council of Foreign Relations, the Bilderberg Group and later the Trilateral Commission, private groups of U.S. business executives, intellectuals and politicians who work to strengthen American ties abroad through dialogue. His books, journal articles and television appearances propelled him to the fore of Democratic Party foreign policy circles. In a 1965 book, he proposed “peaceful engagement” with the Soviet Union — “The idea was to embrace them in order to erode their control,” he later said — and made that phrase a dominant theme after joining the Policy Planning Council of President Lyndon B. Johnson’s State Department.

With his brash manner and rapidly hardening views on Soviet expansionism, Dr. Brzezinski quickly came into conflict with Cyrus R. Vance, the patrician lawyer and government administrator who was Carter’s secretary of state. The Washington press corps began to portray Carter as an indecisive leader who veered from Vance to Dr. Brzezinski and back again. But Dr. Brzezinski always maintained that because Vance was not a strategic thinker, they did not often clash personally over policy.

Vance fought to obtain U.S. ratification of the SALT II treaty with the Kremlin to limit superpower nuclear arsenals. Dr. Brzezinski opposed it, maintaining that conducting diplomacy as usual would reward Soviet misbehavior in Africa and elsewhere. The Soviet invasion of Afghanistan in 1979 pushed Carter to adopt Dr. Brzezinski’s strict “linkage” approach and, among other things, cancel U.S. participation in the 1980 Moscow Olympics. Carter also did not move ahead with ratification of the SALT II treaty, although both countries observed its provisions in practice.

On Iran, the national security adviser urged the unsteady Shah Mohammad Reza Pahlavi to use all force necessary to crush the Islamic revolution. But the uprising quickly chased the terminally ill shah from his throne. Vance had urged political liberalization to quiet the rebellion. This was one of a number of instances in which Dr. Brzezinski moved off the stated objective of asserting “the primacy of the moral dimension in foreign policy” much more quickly than did ­Carter or Vance, who appeared to take the campaign goal seriously throughout the administration.

Even the foreign policy accomplishment of which Dr. Brzezinski was most proud — the establishment of full diplomatic relations with China — sparked controversy because of suspicions at the State Department that Dr. Brze­zinski intended to use the initiative as an anti-Soviet ploy.

Although he played a secondary role in the 1978 Camp David negotiations that produced the Israeli-Egyptian peace treaty, Dr. Brzezinski and his staff did contribute to expanding the U.S. role in the greater Middle East by crafting the Carter Doctrine as a response to the Iranian crisis and the Soviet invasion of Afghanistan. The United States, Carter declared, would not permit any outside power to dominate the Persian Gulf and its oil supplies, committing America for the first time to an active role in the gulf.

Dr. Brzezinski’s bristling criticisms of Israeli policies over the years triggered accusations of ­anti-Semitism, which he denied and rebutted in part by pointing out that his father had been recognized by Israel as having helped Jews escape from Nazi-occupied Europe in World War II. Dr. Brzezinski continued to engage in spirited public advocacy after leaving the White House and joining the Center for Strategic and International Studies as counselor and trustee. A particularly caustic critic of President George W. Bush, he strongly supported Barack Obama’s election campaign in 2008. But Dr. Brze­zinski gradually came to fault Obama’s lack of “strategic determination” and accused him of having “caved in” to Prime Minister Benjamin Netanyahu on Israeli settlements.

A frequent speaker at international conferences, Dr. Brzezinski recalled in a 2013 interview with political scientist Charles Gati that he had crossed paths at one such gathering with Mikhail Gorbachev. The former Soviet leader greeted Dr. Brzezinski, the lifelong anti-communist, with shouts of “Zbeeeg! Zbeeeg!” They hugged. The following day, in his presentation, Gorbachev disdainfully described Dr. Brzezinski as an unreconstructed Cold Warrior.

When asked why later, Gorbachev responded, according to Dr. Brzezinski: “Zbeeeg, Zbeeeg, they paid us. They expected us to argue.” Asked by Gati if they were “paid that well,” Dr. Brzezinski replied, “Not really, but he seemed to think we were.”