Your diet can treat diseases 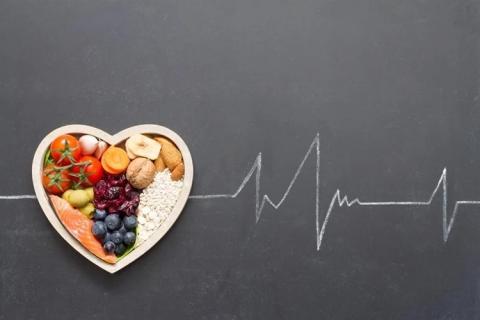 One of the oldest medical texts in the world is the Ebers Papyrus, a 110-page-long compilation of treatments and cures written in around 1500 BC. The text, found between the legs of a mummified body in an Egyptian tomb, has instructions on which plants to consume to treat various diseases, giving 811 prescriptions for a wide range of disorders from mental illnesses to crocodile bites.

Later came "the Hippocratic Corpus" often attributed to the ancient Greek physician Hippocrates, who is widely regarded as the father of modern Western medicine (although scholars today think the collection was written by numerous healers who followed Hippocrates). Remedies included honey to treat insomnia and infected wounds, winter cherry to improve eyesight and cure toothache, basil used to soften the bowel and help with inflammation, and gum arabic for birth control. In total, 40% of the remedies in the collection were made from 44 plants – 34 of which were also consumed as food.

The use of foods to help ensure a long life has been addressed in traditional Chinese, Mediterranean and Ayurvedic medicine and many more ancient texts. Even today, these continue to inspire contemporary wellness trends. And in some parts of the world, indigenous people and tribal communities continue to utilise hundreds of edible plants as medicine by including them in their diet.

The majority of the world's population, however, rely on modern healthcare systems in which food has a relatively small role to play in treating or preventing disease. Instead, food has been largely vilified as an underlying cause of metabolic and cardiovascular diseases through overconsumption and poor diet. But there is now growing consensus that a healthy diet may not only be a way of staving off these health problems, it has the power to treat diseases too.

How can we improve the diets of people around the world to prevent disease? Might food once again be used as medicine?

Many everyday edible plants have inspired medicines that you might find at home. Their abilities to synthesise compounds that are useful to us make them helpful chemistry aides. "Plants are actually brilliant chemists, they've already done much of the work for humans," says Melanie-Jayne Howes, a research leader in phytochemistry and pharmacognosy (the study of drugs from natural origin) at the Royal Botanic Gardens Kew in the UK.

"Rather than having to start from scratch to synthesise a new drug, which can involve a lot of time and effort, and a lot of chemical resources, it can be more efficient to use a plant chemical as the starting material to design and develop a drug, because the steps involved to produce that particular drug may be reduced," adds Howes.

The first discoveries of certain chemicals in edible plants that inspired the development of new drugs might have been accidental or serendipitous in some cases, or based on how those plants were used traditionally, but their occurrence in widely grown edible crops can help scientists source them more easily.

Below you will see some examples of common crops and the medicines that are derived or inspired by their chemistry. (The information provided below is intended for general interest and is not intended to be used as medical advice. If you have a medical condition listed below, always consult your doctor.)

But scientists are also unravelling ways of using food to change the course of disease by delivering medically tailored meals to chronically ill patients or prescribing specific produce to those who have diet-sensitive conditions like diabetes, obesity or high-blood pressure. Delivering meals matched to the nutritional needs of cancer, HIV and diabetes patients, for example, has been shown to almost halve subsequent hospital admissions of those receiving the tailored diet and reduce their overall healthcare costs by up to 16%. Researchers in the US are also running trials where carefully chosen fresh food is prescribed to patients with type 2 diabetes and low-income mothers – an approach that has become known as a "farmacy" – to help improve their health. Many hospitals include specialist dieticians among their staff to help improve the recovery of their patients through better nutrition.

But the concept of treating food as medicine could have a far wider impact on human health too.

Just 10 foods are estimated to play a role in nearly half of all US deaths from heart disease, stroke, and type 2 diabetes each year. These deaths occur due to people eating too few nuts, seeds, seafood omega-3, vegetables, fruits and grains, or eating too much sodium, processed meat and sugary beverages.

Historically, in most developed nations healthcare advice has focused on "bad" foods and limiting the consumption of potentially harmful ingredients like sugar and salt. But there is a growing awareness that even in wealthy countries, large portions of the population are not getting access to foods with the nutrients they need to stay healthy.

The world was already not on track to meet the goal set by the World Health Organization (WHO) of ending global hunger by 2030, but the Covid-19 pandemic has set back that goal even farther. Malnutrition – which covers all forms of inadequate diet, including lacking essential nutrients from your diet and obesity – is a problem that affects people all over the world, including in developed countries like the US and UK. The WHO estimates that two billion people suffer from malnutrition, and 928 million people – 12% of the world's population – were severely food insecure in 2020. This figure is 148 million higher than in 2019.

"Food insecurity is directly linked to chronic medical conditions," says Hilary Seligman from the University of California San Francisco, US. "This is because people living in food-insecure households may have poorer dietary intake. Because healthier foods cost more. And the stress of food insecurity and less healthy diets create inflammation in the body. When the household is focused on accessing foods, other health-promoting behaviours like physical activity and refilling medications are less likely to be priorities."

Food insecurity also puts immense pressure on healthcare systems. Seligman and her colleagues found that food insecurity is closely associated with higher healthcare use, including emergency department visits and inpatient admissions. Those with the highest healthcare costs were often also food insecure.

In the US, the costs to the healthcare system of cardiovascular disease are estimated to be $316bn (£239bn) each year, and $327bn (£247bn) annually for diabetes.

"If you think about how much money each country spends on healthcare yet ignores food in that investment, it actually explains a lot about where we are today with global epidemics of obesity, prediabetes and diabetes," says Mozaffarian, adding: "There is no way we can get rid of the rising healthcare costs around the world unless we fix food first."

Advocates of using food as medicine believe that by increasing access, availability and knowledge around healthier eating, some chronic diseases can be eliminated or slowed down while significantly reducing healthcare costs around the world.

But there are certain challenges. Existing programmes in the US focus on relatively small, already ill populations, and are designed to last only a couple of weeks or a couple of months, Seligman says. In the US, an individual admitted to the hospital with heart failure might receive medically tailored meals for six weeks or a child enrolled in a weight management clinic may receive vouchers for fruits and vegetables that last for three months. However, the benefits of a dietary intervention might take years or decades to achieve, meaning the patient must continue to change their lifestyle without medical support.

"If we can support a child with healthier dietary intake throughout their childhood, we will generate enormous benefits in the long-term that are likely to be cost-effective. But they won't happen quickly. For example, we may be averting cases of diabetes 30 years later, or delaying the onset of obesity by a decade," Seligman notes.

The pandemic has brought renewed interest in healthier eating, but as Follow the Food has highlighted previously accessing good quality, nutritious food is not easy for everyone, even in developed countries. Often healthy foods are expensive, meaning only those who have the means and privilege to afford diverse dietary preferences can access them. The challenge is how to give those who are less well-off access to nutrient packed foods too. Some innovators are trying to boost the nutrients in staple crops around the world.

There is already a strong market for healthier eating, particularly with organic goods, suggesting that people believe organic produce is better for their wellbeing even though there is a lack of evidence that organic foods are any healthier than the alternatives. So, there is good reason to think that fortified foods would also be popular with consumers.

Technology and service businesses were quick to discover the pandemic-driven trend for health foods, while findings on the protective role of a healthy immune system against infectious diseases like Covid-19 further increased interest in healthy eating.

Scientists at Cranfield University are developing a new variety of tomato to be more nutritious, which you can see in the video clip below.

"I think diversifying diets is the ultimate solution," says Howarth Bouis, a winner of the World Food Prize and founder of HarvestPlus, a non-governmental organisation dedicated to eradicating "hidden hunger". "Efforts have to be made in that direction… But if you only work on dietary diversity, it's going to take decades and decades because basically you have got to raise people's incomes so they can afford diverse diets."

In Africa, many of the cereals and root vegetables that form the dietary staples lack vital micronutrients. The result is the problem called hidden hunger, where what can seem like plentiful food availability in reality lacks necessary vitamins and minerals. An estimated 19% of the population in Africa are currently undernourished. In east Africa, for example, 35% of women of reproductive age suffer from anemia – ranging from 19% in Rwanda to 54% in Mozambique – with dietary iron deficiency being a major cause. Among children, iron deficiency is even worse.

To tackle this problem, HarvestPlus has started using a process called "biofortification" in Brazil, Africa and India, which focuses on a root cause of hidden hunger, literally and figuratively. By injecting necessary vitamins and minerals into crops, it aims to strengthen their nutritional value before people start eating them.

"The idea I had was, if people are eating these large amounts of food staples day in and day out, let's try to load more of what they need into those staples," says Bouis. "Let's get agriculture to provide minerals and vitamins that people need. Let's close that gap in the food supply."

Adding vitamins or minerals to food items such as milk or cereal is a common practice. However, this is a costly process and these items are already out of reach to those who are most deficient. Enriching the crops themselves is what makes biofortification unique. So far, HarvestPlus has reached an estimated 10 million farming households in 60 countries. From rice to wheat to bananas, there are now 290 varieties of 12 biofortified crops which provide higher amounts of vitamin A, iron or zinc.

Poverty, inequality and the industrialisation of our food system have led to a global nutrition crisis that will last for generations. According to the WHO, 22% (149.2 million) of children under five years old were affected by stunting in 2020, 6.7% (45.4 million) suffered from wasting and 5.7% (38.9 million) were overweight.

While deficiency is more severe in Asia and Africa, many communities suffer from malnutrition even in the wealthiest countries like the US or the UK. This affects entire generations' wellbeing and participation to society, say Mozaffarian and Seligman, causing immense pressure on healthcare systems, and increasing deadly levels of obesity, cancer and heart diseases. But this is not an irreversible trend.

Physicians, scientists and innovators around the world are rethinking how we approach food. Whether it's plant breeding, genetically engineering crops, informing communities about diverse diets, or utilising food as a pre-emptive tool against potential diseases, many interventions are underway.

Some of these may have just begun, but it's already clear that food has enormous potential to transform our health and wellbeing.