The Yiddish world of shtetl America 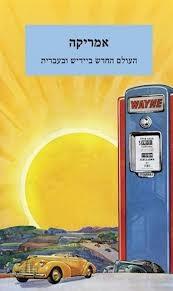 Israeli literature was willing to embrace poignant stories in Yiddish about shtetl life, but had a hard time stomaching ones about secure Jewish existence in America. The new short-story anthology ‘America’ helps fill in the gaps.

Mass Jewish immigration to America in the late 19th and early 20th centuries is one of the most interesting chapters in the history of the Jewish people. During this period of time, a torrent of nearly 2 million Jews flowed from Europe to the United States. Most of them stayed to live there, prospering and expanding into the world’s largest Jewish community.

Until now, Hebrew speakers have had minimal access to material from and about that period. What was available was a translation ‏(from the French‏) of the wonderful book “Ellis Island,” by Georges Perec and Robert Bober, as well as Matan Hermoni’s brilliant 2011 debut novel, “Hebrew Publishing Company.” Now Hermoni has brought together an anthology of stories by several of the most significant Yiddish writers to immigrate to America in this period – Sholom Aleichem, Lamed Shapiro, Moyshe Nadir and Isaac Bashevis Singer ‏(that latter only arrived in 1935‏), as well as the works of L.A. Arieli-Orloff, who was writing in America in Hebrew. It is a small and enchanting book that to some extent makes up for the severe lack of Hebrew-language texts pertaining to the period.
The title given to the anthology, “America,” alludes to another famous literary “Amerika,” that of Franz Kafka ‏(which the author had originally intended to title “The Man Who Disappeared”‏). That great novel depicts the encounter of the ‏(Jewish‏) immigrant with the new world as an event that, in spite of its latent promise, does not enable the immigrant to shake off the signs of migration, wanderings, uprootedness and loneliness. Something of that basic sensation runs through this collection of stories, most of which were written not long before Kafka’s book was published.

Although these stories are set in New York, the quintessential modern metropolis, it is not the new city’s radiance and abundance that are on the agenda. The immigration experience, the primary life experience of the Jew in the 19th and 20th centuries, is the substantive raw material for the writers featured in “America.”

Hermoni writes in the epilogue: “The Hebrew reader can perhaps digest literature translated from Yiddish, as long as it talks about the shtetl and the Eastern European Jewish state of being. But New York in Yiddish? That sounds weird.” This insight hits it on the head, but still requires some clarification. Hermoni explains Israelis’ lack of familiarity with American Yiddish writing as the victory of the Hebrew literature of the Land of Israel, which shunted to the sidelines both the Hebrew and Yiddish literature of America, at least in part because the country was scorned for the hope of material prosperity it offered. In other words, it was a victory of the spiritual over the material.

In addition to Hermoni’s social and literary explanations for Israeli readers’ lack of familiarity with this segment of Jewish literature, one may add the obvious political implication of the preference for shtetl Yiddish over American Yiddish: The Yiddish of the Eastern European shtetls, which were decimated in the Holocaust, does not constitute a threat to the Zionist solution. The establishment of the State of Israel, and the ascendance of Hebrew as a sovereign national language, signal a clear victory over shtetl Yiddish. Conversely, New York Yiddish represents an alternative option of secure Jewish existence − which, even if it does not reject the Zionist solution, does bypass it with a practical elegance. This, too, may come to explain the peculiar absence of American Yiddish ‏(and American Hebrew‏) writing from the early 20th century from the Israeli literary scene.

The conventional wisdom among educated Jews in the late 19th and early 20th centuries regarded the New World “as a stronghold of materialistic brutalization and the loss of the humanistic and universalistic values in whose name the Enlightenment movement spoke,” writes Hermoni. Something of this spirit also rises from the stories in this anthology. It seems to focus on the challenges new immigrants face when encountering the destructive capitalism of the big city in the new land. In one way or another, all of the stories engage in the question of money and America’s reputation as the “goldene medina.”

Two very short stories by Sholom Aleichem are included that offer captivating monologues by smart, seasoned Jews who know how to get things done in their new surroundings. An outstanding story by Moyshe Nadir ‏(translated into Hebrew by Hermoni‏), “Big Biz,” is written as a series of dialogues between a wealthy, arrogant and uncaring landowner and a farmhand working the owner’s fields. The satirical spirit of the text, and its inherent revulsion of capitalists, makes it more relevant to present-day Israeli readers. One finds in both Nadir and Sholom Aleichem a slight melancholy over the Jews who do not miss an opportunity to ride roughshod over their fellow Jews in the name of avarice.

The Lamed Shapiro story “New Yorkish” ‏(translated by Roy Greenwald‏) is in my opinion the book’s most beautiful. It fully conveys the experience of urban alienation in New York, an alienation that is also capable of giving rise to relationships between lonely individuals when the time is right. Even a fleeting one-night stand between a resident of the Bronx and a waitress/prostitute can generate warmth. Though these relationships have an economic element, Shapiro is not moralistic about money and is capable of seeing that they can be a channel for the expression of much more profound and primal urges: “Even bought love is love,” he writes. “If you show a person a penny, he will at once recite a poem. But the joke is that the psalm on his lips is the absolute truth.”

Isaac Bashevis Singer’s charming story “The Cafeteria” ‏(translated by Hermoni‏) is the only one in the book that takes place after World War II rather than beforehand, and features a heart-rending Holocaust survivor who has passed through hell but who now, though her life in New York is relatively sheltered, has difficulty coping with post-traumatic symptoms. This story also indirectly glances on the economic theme, through its engagement in the monetary reparations to which the survivor is entitled. Part of the story’s charm lies in its description of the characters’ daily encounters with poverty in the neighborhood delicatessen. This lends the story a realistic edge, so that the fantastic plot shift that occurs toward its end catches the reader totally unprepared.

Among those represented in this select anthology is the forgotten Hebrew writer L.A. Arieli-Orloff, who lived in New York ‏(following a not insignificant number of years spent in the Land of Israel‏) and wrote in Hebrew. The fact that he did so in America may be one of the reasons this interesting writer has been neglected. Arieli refers in the two stories appearing here to the issue of Hebrew studies for Jewish children in America ‏(he was employed as a Hebrew teacher‏), and he expresses his sense of futility in this thankless task.

As a Zionist, the foreignness of Hebrew in American life seems to him a parable highlighting the foreignness of the Jew in the U.S. It appears that Arieli, who wrote a wonderful Hebrew laced with sharp sarcasm, specialized in the illustration of a variety of New York Jewish characters: the nouveau riche, directors of associations and organizations, philanthropic widows, Zionist wheeler-dealers, the ardently religious and the completely ignorant.

Arieli-Orloff’s story “New York,” which begins with the life story of an aging Jewish millionaire, climaxes with a hedonistic gala meeting of American Zionists that abruptly ends in wild, lethal catastrophe. The story is told in a way that shifts freely to and from various characters. His novella “Diary of a Lonely Man,” meanwhile, focuses on the thoughts of a solitary, withdrawn Jew looking for a way to feel a connection to the city and the society around him.

Arieli-Orloff’s stories are dipped in oblique but carefully honed criticism of Jewish society in the New World, Jewish self-hatred, Zionist politicking, assimilation and distancing from religion. “The Jew’s entire existence, and his wandering around in your streets, is a sort of paradox, a sort of colossal aberration, for which you would search in vain to find the reason,” he writes in “Lonely Man.”

To some extent, this sensation is reflected in all the stories in the anthology. Nevertheless, within this paradox, which revives for Israeli readers the distant, practically forgotten image of the Jew who is a stranger to his surroundings, we are left with a feeling of abounding charm, and it is attractive and enticing.

By Shira Stav
Dr. Shira Stav teaches in the department of Hebrew literature at Ben-Gurion University of the Negev. Her most recent book of poetry is “Lashon Itit” ‏(“Slow Tongue”‏), published by Dvir.