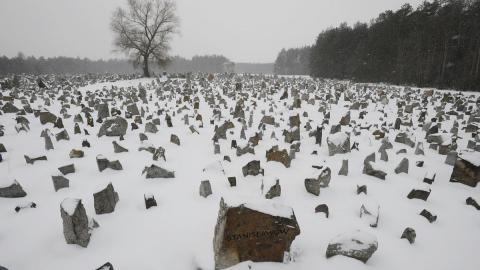 Jerusalem’s Yad Vashem Holocaust memorial museum said Wednesday that it was “profoundly concerned” by a Polish court ruling that two prominent Holocaust researchers must apologize for disseminating claims about a man they said helped kill Jews during World War II.

The Warsaw District Court said on Tuesday that Barbara Engelking and Jan Grabowski must issue an apology to a woman who claimed her deceased uncle had been slandered in a historical work they co-edited. “Yad Vashem acknowledges the court’s verdict, but remains deeply disturbed by its implications,” the Holocuast museum said in a statement. “Any attempt to limit academic and public discourse through political or legal pressure is unacceptable and constitutes a substantive blow to academic freedom.”

Lawyers for 81-year-old Filomena Leszczynska had argued that her late uncle, Edward Malinowski, was a Polish hero who had saved Jews, and that the scholars had harmed her good name and that of her family. At stake in the case was Polish national pride, according to the plaintiffs, and according to the defendants, the future independence of Holocaust research.

Judge Ewa Jonczyk ultimately ruled that Engelking and Grabowski must make a written apology to Leszczynska for “providing inaccurate information” that Malinowski robbed a Jewish woman during the war and contributed to the death of Jews hiding in a forest in Malinowo in 1943, when Poland was under German occupation. They were also ordered to apologize for “violating his honor.”

The case was been watched closely because it is expected to set an important precedent for independent Holocaust research. The ruling can be appealed, however. Defending Engelking and Grabowski, Yad Vashem said, “Historical research must reflect the complex reality that existed in a given period, grounded in the scrupulous analysis of a body of existing documentation, as was done in this thorough book by the researchers.”

Malinowski was acquitted in a communist court in 1950 of being an accomplice to the 1943 killing by Germans of 18 Jews in a forest near the village of Malinowo. He is mentioned in a brief passage of the 1,600-page historical work, “Night Without End: The Fate of Jews in Selected Counties of Occupied Poland,” which was co-edited by Grabowski and Engelking. They researched and wrote parts of it, along with other researchers.

Yad Vashem said that in light of the ruling, it would publish an English version of the book. “As with all research, this volume about the fate of Jews during the Holocaust is part of an ongoing discussion and as such is subject to critique in academia, but not in courts,” the museum said.

Grabowski, a Polish-Canadian history professor at the University of Ottawa, and Engelking, founder and director of the Polish Center for Holocaust Research in Warsaw, are among Poland’s most prominent Holocaust researchers.

Poland was occupied by Nazi Germany during the war and its population subjected to mass murder and slave labor. While 3 million of the country’s 3.3 million Jews were murdered, so were more than 2 million mostly Christian Poles. Poles resisted the Nazis at home and abroad and never collaborated as a state with the Third Reich. Thousands of Poles have been recognized by Yad Vashem in Israel for risking their own lives to save Jews.

Yet amid the more than five years of occupation, there were also Poles who betrayed Jews to the Germans. The topic was taboo during the communist era and each new revelation of Polish wrongdoing in recent years has sparked a backlash. Historians debate how many Poles aided the Nazi death machine, with estimates ranging from tens of thousands to hundreds of thousands.

Poland has never admitted to complicity on any large scale and in 2018 Warsaw passed a law prohibiting people from blaming the Polish nation for Holocaust atrocities; the law was subsequently amended to remove criminal penalties. “The existing diverse documentation, along with many decades of historical research, shows that under the draconian Nazi German occupation of Poland and despite the widespread suffering of the Polish people under that occupation, there were Poles who were actively involved in the persecution of the Jews and in their murder,” Yad Vashem said.

“The prosecution of researchers and journalists who deal with these issues, instead of pursuing academic discussion as is the norm throughout the world, constitutes a real threat to academic and press freedom,” the statement concluded.