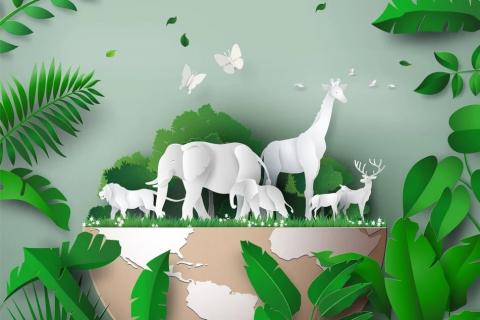 Monitored populations of vertebrates (mammals, birds, amphibians, reptiles and fish) have seen a devastating 69% drop on average since 1970, according to World Wildlife Fund’s (WWF) Living Planet Report 2022. Populations in Latin America and the Caribbean have fared worst, with an average decline of 94%. Global freshwater species have also been disproportionately impacted, declining 83% on average.

The report identifies several key drivers of biodiversity decline including habitat loss, species overexploitation, invasive species, pollution, climate change and diseases. It also calls on policymakers to transform economies so that natural resources are properly valued. As biodiversity loss and climate change share many of the same underlying causes, actions that transform food production and consumption, rapidly cut emissions, and invest in conservation can mitigate the twin crises.

“The world is waking up to the fact that our future depends on reversing the loss of nature just as much as it depends on addressing climate change. And you can’t solve one without solving the other,” says Carter Roberts, president and CEO of WWF-US. “Everyone has a role to play in reversing these trends, from individuals to companies to governments.”

“These plunges in wildlife populations can have dire consequences for our health and economies,” says Rebecca Shaw, global chief scientist of WWF. “When wildlife populations decline to this degree, it means dramatic changes are impacting their habitats and the food and water they rely on. We should care deeply about the unraveling of natural systems because these same resources sustain human life.”

World leaders will meet at the 15th Conference of Parties to the Convention of Biological Diversity (CBD COP15) in December for a once-in-a-decade opportunity to course-correct for the sake of people and the planet. The US government can help ensure that COP15 and the emerging 2030 Global Biodiversity Framework are successful through its diplomatic engagement and by bringing new resources to the table to help developing countries protect their biodiversity.

“In the US, Congress should finalize this year’s funding bills with significant increases for global conservation programs,” Roberts adds. “Doing so would empower the federal government to drive greater progress in conserving and restoring nature, and send a signal to other countries that it expects other actors to do the same.”

The Living Planet Index, provided by the Zoological Society of London (ZSL), is an early warning indicator of the health of nature. This year’s edition analyzes almost 32,000 species populations with more than 838 new species and just over 11,000 new populations added since the 2020 edition. It provides a comprehensive measure of how wildlife is responding to environmental pressures driven by biodiversity loss and climate change, while also allowing us to better understand the impact of people on biodiversity.

Some of the species captured in the Living Planet Index include the Amazon pink river dolphin, which saw populations plummet by 65% between 1994 and 2016 in the Mamirauá Sustainable Development Reserve in the Brazilian state of Amazonas; the eastern lowland gorilla, whose numbers saw an estimated 80% decline in DRC’s Kahuzi-Biega National Park between 1994 and 2019; and South and Western Australian sea lion pups, which plunged by two-thirds between 1977 and 2019.

The Living Planet Report 2022 emphasizes that recognizing and respecting the rights, governance, and conservation leadership of Indigenous Peoples and local communities is imperative to delivering a nature-positive future.

Flor Delicia Ramos Barba said she has felt the loss of nature in the Indigenous community of Santo Corazon in Santa Cruz, Bolivia, where she lives. “The roar of the jaguar could be heard near the community three years ago, but not anymore. Compared with my childhood, I’ve witnessed a big difference. The animals in the community are now gone. We also feel this lack in the rivers. The people used to go fishing to support their families, but now there are no fish. Tree species have also been disappearing.

“As a community we have become aware of the difficulties that come our way year after year. The conservation of our territory is important to us.”