Why it makes no sense to negotiate with Putin 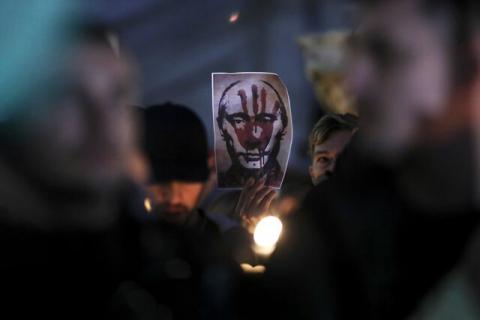 Recently, the same bleak motive has been heard from all sides: Ukrainians, they say, exaggerate; NATO goes too far; we must not forget about inflation; with Putin it is necessary to be more careful. Most outspoken Henry Kissingerwho last month in Davos said that under the threat of “a new war [НАТО] with Russia” Ukraine must agree to the loss of part of the territory.

In Germany, where the government of Olaf Scholz hesitates with transfer to Ukraine promised weaponsSome politicians clearly think that the solution to Germany’s energy dependence on Russia is not to end it, however painful it may be, but to turn a blind eye to it, slowly returning to its ruinous comfort. Emmanuel Macron does not want to be left behind. “Russia cannot be humiliated,” recently again emphasized he before finally leaving for Kyiv.

How wrong they are! And what a sign of impotence, lack of strategic vision, which Vladimir Putin will not fail to take advantage of in every possible way. As one Russian billionaire close to the Kremlin recently declared British journalist Katherine Balton, Putin is “convinced that the West will be weakened … and that in the long run it will win.”

To hasten our capitulation, he uses all available means: a carefully calculated cut in oil and gas supplies that creates an extremely tense situation in this industry; destabilization of the Balkans; blackmail food shortage, which is rapidly turning into a catastrophe in Africa and threatens a new migration crisis. Not to mention the threats of nuclear weapons, to which Putin regularly returns, as if he really was ready to pay for his ambitions and personal security with the destruction of the whole world, and along with Russia.

As soon as his initial surprise at the immediate and coordinated reaction of the West to the invasion of Ukraine passed, Putin again bet on the long term, on the internal contradictions of Europe and, above all, on our weakness and total misunderstanding, at least in Western Europe, of Russian imperial consciousness.

Putin, like his minister Lavrov, has been trained to lie, and lying is his natural tool. For him, dialogue is just a way to gain an advantage and move his pawns forward before resorting to forceful methods again when necessary. Negotiations or agreements — like the 2015 Minsk agreements that were supposed to end the conflict in Donbass — are just an opportunity to build on gains until new ones arise. That’s how it works. Think like Kissinger that you can go back to status quo ante – delusion. To think that Putin can be forced to negotiate honestly and that he will (finally!) respect the terms of the agreements is simply ridiculous. If we weren’t just as helpless, just as scared, just as blind, if we helped rearm Ukraine back in 2015, or deployed a NATO contingent on its territory, even if only as instructors, Putin – who respects only one law, the right the strongest, would never risk starting this war. If he is allowed to take even the slightest advantage of this one, he will have to prepare for the next one.

One can’t help but rejoice at the change in mood between Macron and Scholz, who, as became clear during their visit to Kyiv, finally realized that Ukraine should not continue to be denied EU candidate status. Meanwhile, their illusions or false hopes about Putin are dying with difficulty. For several decades now, part of Europe, and primarily Germany, has been relying on Russia for energy security, while at the same time ignorantly ignoring the warnings of climatologists and refusing to make an energy turnaround. What a waste of time and what luck for Moscow!

Since the beginning of the war, the export of oil and gas brought Russia already has 93 billion euros, most of which it received from the European Union. This is two and a half times more than 37 billion euros, which the United States promised Ukraine. Now we are crying that gasoline costs more than two euros, and we are starting to look for a way out of this situation. This is outrageous and shameful. Petrol is also expensive in Ukraine, and there are endless queues at gas stations. But nobody complains. Ukrainians do not want cheap gasoline, but weapons and ammunition in order to repel the attack of the invaders, liberate their cities and return the lost territories. And they are right.

By invading Ukraine, Putin overturned the post-1945 world order: it is naïve to hope that its fragments can be glued together. If Putin and his henchmen show their teeth to the world all the time, and this is their usual way of doing business, then behind closed doors they closely monitor the real balance of power and calmly calculate the possible consequences.

When the Ukrainians halted the Russian advance on Kyiv through their fierce resistance, Putin pulled back his troops, allowing the world to see the monstrous things his “liberation” army had done to civilians in Buche, Irpin, Motyzhin and other settlements. When Nikolayev’s rebuff halted the offensive against Odessa from Crimea, Putin was forced to temporarily abandon his ambitions to seize the famous port.

Now, finally realizing the weakness of his poorly trained and thoroughly corrupt army compared to Ukraine’s over-motivated and Western-armed Ukrainian troops, he has concentrated all his forces in the Donbass, using aircraft and heavy artillery to level city after city to the ground – the only way to wage war which is left to him. And here, too, it must certainly be stopped and thrown back. American and British pledges to put in long-range missile launchers to balance out forces is a first step in the right direction. But this is not enough.

Putin is a man who, in the 21st century, is waging a 20th century war to achieve the goals of the 19th century. For him, now comparing himself with Peter the Great, the annexation of Ukraine is an existential issue that has nothing to do with his claims to NATO. Ukraine should not exist, and that’s it. And there are no concessions, diplomatic moves or “reasonable” compromises that we could offer him to prevent the realization of his ambitions to preserve the territorial, political and economic integrity of Ukraine, not to mention its European future. Demanding Ukrainians to stop hostilities and move on to another Minsk talks is to set the stage for a re-invasion of Ukraine in a few years, when Putin rebuilds his army and replenishes his stocks of men, weapons and ammunition. And if he dies by this time, but his regime continues, then his successor will do the same.

On May 9 in Strasbourg, Emmanuel Macron, in the context of possible negotiations with Russia, referred to Treaty of Versailles, whose humiliation for Germany in 1918 “destroyed the path to peace.” Concerning Weimar Republic, this beautiful democratic experiment, then this is the pure truth; but Macron, apparently, does not understand the historical moment in which we are now at all. If Moscow had 1918, it happened in 1991. Since then, just as in Germany in the 1930s after the collapse of Weimar, a power has firmly established itself in Russia, fascist, revanchist and, moreover, absolutely corrupt, which destroyed civil society and its life-giving forces, seized the entire economy for its own enrichment and rejected the democratic world. and the order underlying our common security and peace.

Now is not 1918, but 1939. And as in the case of Hitler’s Third Reich, at some point on the path to peace, the total destruction of the Putin regime will be required, which, no matter what the “collective West” thinks, is not immanent for Russia. Only a free, democratic Russia, ruled by citizens and not by a mafia clique intoxicated with messianic ideas, can return to the ensemble of nations and become a full member of the international community, as Germany and Japan eventually did after 1945.

Putinism should not be treated as a political regime. It’s banditry with ideas Historian Yaroslav Shimov on what the West is really responsible for starting the war

For Poland, the Baltic states and central Europe, this is an obvious fact that they shout with all their might; the Americans, apparently, have finally realized this and are now working on it together with the British; even the Finns and Swedes, suddenly abandoning 80 years of neutrality, began to seek protection from NATO, seeing in it their only guarantee against the growing madness of the Russian regime.

By contrast, in Western Europe, our leaders are still shackled by their myths, intellectual laziness and moral weakness due to too long a peace. They seem to tend to compromise all the time. Often a compromise is indeed necessary; but in the current situation, this would mean the collapse of European ideals and would only add fuel to the fire of Putin’s ambitions. Only the unconditional defeat of Russian military forces in Ukraine can restore a semblance of security to the continent. And only under the condition of such an unconditional defeat will it be possible to conduct a dialogue with Russia and reach any reliable agreements. Without an undeniable and undeniable victory for Ukraine, any diplomacy will be either chatter or capitulation.

“Russia cannot be humiliated.” Over the past 20 years, the more we prostrate ourselves before Russia in order to meet her halfway or even spare her, the more Putin screams that he is being humiliated, while for him the humiliation of interlocutors is a whole art. It’s amazing that we continue to play his games. In reality, Putin is humiliating himself. The one that claims a place in the ranks of the powerful of this world, but does not respect the most elementary rules. The fact that it does not cost a penny and violates human rights when it suits him, in Chechnya, Georgia, Syria and now Ukraine. And the fact that he unleashed a war, having a miserable, ridiculous, archaic army, which is robbed and starved by his own generals.

If he is really offended by us for this and offended to death, we should not apologize to him, but teach him a good lesson and put him in the place he deserves. To the place he chose himself.