In Whose Hands Is the Holocaust? 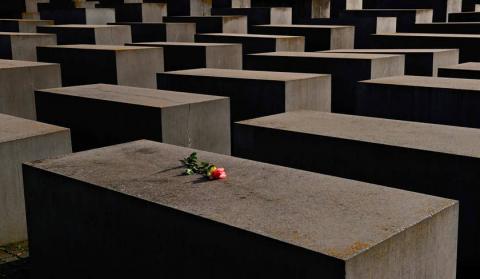 In the run-up to International Holocaust Memorial Day, marked this week, major Jewish organization and prominent community figures in Britain decided to use the occasion to lobby in parliament and the media on behalf of another people: the Uighurs.

The Muslim minority of the Xinjiang region in China are undergoing systematic persecution, mass incarceration and the eradication of their culture and language at the hands of the Communist government.

Meanwhile this week, just across the English Channel, someone vandalized the main Holocaust memorial in Paris, spray-painting on it: "Uighurs 2021=Jews 1941" and "Uighur Lives Matter." At the same time Jews were trying to apply the lesson of "Never again" to another crime against humanity, Jews were "blamed" for monopolizing victimhood.

It’s a slippery slope. As Jews, we bear the memory and the legacy of the Holocaust. And we also have the opportunity to use that memory to make a wider point about the world around us. But how does anyone decide when it’s suitable to do so?

For decades, Armenians beseeched Israel and major Jewish organizations to recognize the genocide committed against them during the First World War, but it was politically inconvenient: Turkey was both a member of NATO and, until not that long ago, a strategic ally of Israel’s (and may return to be once again, in the not too distant future).

Jewish organizations must exercise care when choosing which major crimes against humanity to highlight in the context of Holocaust remembrance. Over a decade ago, Sudan, an ally of Iran and Hamas, was firmly in our sights for slaughtering the people of Darfur. It has since transferred its regional alliances and we’re no longer asking what else it may be doing.

The same goes for other humanitarian disasters. The geopolitical circumstances of the stark crisis in Yemen or the ethnic cleansing of the Rohingya in Myanmar make them less comfortable targets. China, however is currently the undisputed enemy of the West; even its trade with Israel has gone down.

I’m not saying that lobbying on behalf of the Uighurs is hypocritical. It’s laudable. But it is also selective, and tells us a lot about the pitfalls of commemorating the Holocaust in the 21st century.

We worry about Holocaust denial, as we should. But at the same time, we fail to give credit to the countless researchers, historians, educators, writers and filmmakers, and above all, the survivors, who after rebuilding their lives, found it in themselves to share what they had experienced with others.

Thanks to them there is no real danger of the Holocaust ever being forgotten. The real challenge is not holding on to their memories: those are well-preserved, but to avoid the trivialization, politicization and manipulation of our collective Shoah memory.

Which is why one of the key ways of keeping the memory of the Holocaust relevant should be to use its lessons to help draw attention to the current threats of genocide and ethnic cleansing around the world. But that also opens it up to so much abuse from politicians and pundits from all sides making flippant comparisons.

What to do with an Israeli prime minister who can’t mention the Holocaust without dragging in Iran, and who excuses, for the sake of political convenience, his personal allies around the world of their own neo-Nazi dalliances and light Holocaust revision? Benjamin Netanyahu is no different in his use and abuse of memory from those who only bring up the Holocaust to make spurious comparisons between Israelis and Nazis.

We can’t police Holocaust discourse. We can’t even claim it as Jews for ourselves anymore, now that it’s become an "International" Memorial Day.

The date was fixed for the anniversary of the liberation of Auschwitz, and while Jews were, by overwhelming numbers, the majority of the victims of the Birkenau death camp built besides Auschwitz, and of the other death camps as well, there were other victims from every country in Europe, as well as other minority groups like the Roma and members of the LGBT community. Increasingly, the word “Jews” is absent from the statements of politicians and media features marking the date.

In some cases, it’s relatively easy to attribute this omission to conscious attempts to downplay any unique victimhood to the Jews. And it’s not new of course: The Soviet Union under Joseph Stalin brutally repressed its own Jewish citizens, not least when they tried to commemorate victims as Jews.

Denying their identity and rolling them all in to one group of "victims of fascism," was just one stage before the show-trials in Moscow and Prague and the accusations leveled at Jews that they were "Zionist-Nazi" agents of the west.

Similar motives exist today, whether on the Israel-hating hard left, who use the same Soviet tropes from the 1950s, or the right-wing nationalist governments of Poland and Hungary for whom the actual circumstances of the Holocaust in their countries, especially the collaboration of "patriotic" citizens in the deportation and murder of their Jewish neighbors, is an inconvenient blot on their reconstructed national narrative.

But there are also good faith actors who simply want to make the Holocaust more inclusive. And with good reason, since the mass-murder of the Roma under the Nazis certainly hasn’t received anywhere near sufficient recognition in either the history books or public memorials. And what would be more natural than for members of the LGBT community to want to commemorate their own suffering?

That inclusivity doesn’t have to detract from the planned and industrialized genocide of millions of Jews, which was of a different scale to that of other groups. But there are legitimate concerns about how the wider public could lose sight of the unique way in which the Nazis, from early on, sought the eradication of the Jews and then devoted considerable resources to it, even when it was a distraction from their wider war effort.

And how all this connects to the ancient and still-present hatred of the Jews, and the peculiar characteristics of antisemitism, which set it aside from other forms of group-hate. A universalized and internationalized message will always be more shallow and lacking in nuance.

There’s a certain dissonance here. At the same time, we would like as Jews to use our memory of the Holocaust to draw attention to crimes being committed against the Uighurs while we want to make sure that no-one actually thinks they’re identical crimes, or of the same magnitude.

It’s not just inclusivity and political expediency. As the last of the survivors pass away, the Holocaust will increasingly become an abstract symbol. And while that’s better than it being forgotten, it brings its own set of challenges.

Governments and international organizations can’t be trusted not to use memory, or ignore inconvenient parts of it for their own political considerations. It falls to individuals, especially to those of us who had the unique privilege to be born to parents and grandparents who survived, to use what voices we have to try and keep the record straight.