Who are the Jews of Ukraine? 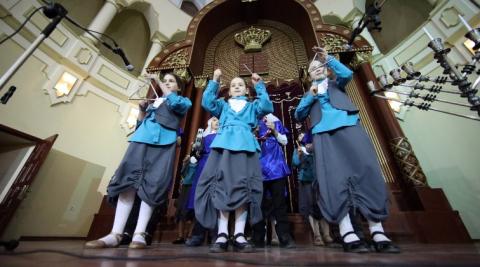 Jews have lived in Ukraine for such a long time that their arrival here predates even the first recorded use of the country’s name. Starting in the ninth century, Jews began settling between Uzhgorod and Lugansk — respectively the westernmost and easternmost cities of what is now Ukraine, a landmass four times the size of New York state with 45 million residents.

Historically, though, Jews haven’t had an easy life in Ukraine for most of that time. In the 17th century, thousands were brutally butchered by the Cossack army of Bohdan Khmelnytsky. Nonetheless, the area saw an influx of Jewish immigrants in the 18th century, when it became part of the Russian empire’s Pale of Settlement – a zone in which Jews were allowed to settle. Ukraine’s relative proximity to Moscow made it a preferred destination for Jews.

By 1939, there were no fewer than 1.5 million of them in Ukraine. One was Sholem Aleichem, one of the world’s greatest Yiddish writers. Another was Chayyim Nahman Bialik, often seen as Israel’s national poet. Golda Meir, Israel’s only female prime minister, was born in Kiev. Zeev Jabotinsky, the ideological father of Israel’s Likud party, was from Odessa.

Ukraine, which today has anywhere between 60,000 to 360,000 Jews, depending on the definitions of who’s counting, also became a huge spiritual center for Hasidic Judaism. It is dotted with the graves of luminaries, from the Baal Shem Tov, the father of Hasidism, in Medzhybizh to Rabbi Nachman of Bratslav’s grave in Uman, where 30,000 of his followers gather annually for Rosh Hashanah, the Jewish New Year.

So profound was the impact of Jews on Ukraine that Yiddish was one of three state languages on the paper currency of the Ukrainian People’s Republic — an attempt at independence from Russia that lasted four years until 1921.

The Nazis and their collaborators – local and foreign – murdered about a million Ukrainian Jews, nearly all of them in killing pits. One of the pits, Babi Yar in Kiev, was so massive that it was filled with the bodies of more than 30,000 victims within two days.

After the fall of communism, many thousands of Jews left for Israel and the United States. But many thousands stayed in Ukraine, setting in motion a cultural and religious revival that has braved adversities like the 2014 revolution and recession. The success is thanks in part to the highly intellectual and activist character of this Ashkenazi, post-Soviet community.

Kiev has several Orthodox communities and a Progressive one. It recently received an American-style Jewish community center. And it has several Jewish cultural clubs for young adults. Odessa, which has Ukraine’s second-largest Jewish community, also has two JCCs and two Jewish book clubs in addition to a Jewish museum and Limmud FSU Jewish studies festivals that are usually booked to capacity.

Even more remarkable is the Jewish community of Dnepro in the country’s east. Once a closed-off military city under communism, it has become something of an unofficial capital for Ukrainian Jewry due to the efforts of locally born oligarchs.

In 2012, they built a 22-story cultural and business center called Menorah — the largest Jewish community center in Europe — at a cost of $100 million. The building is shaped like the Jewish candelabra for which it is named.