Where is the protest? 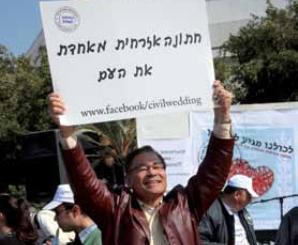 Family justice would start with passing a Basic Law that would recognize different types of families and parenting constellations, and would establish genuine civil marriage.

The cry reverberates throughout the land. People march to Knesset. A Facebook campaign is launched. People take to the streets. Politicians kiss babies, pledge to act and establish committees to dispel the unrest. And then - nothing.

The issue, any issue, disappears. The public agenda is hijacked by spin doctors who inundate the airwaves with Iranian nuclear hysteria. The cost of living continues to skyrocket while wages stagnate. Families crash financially, and the entire population remains prisoner to a system of religious law that blatantly discriminates against so many and covertly discriminates against the rest.

Where is the protest? Why do we blindly accept the decree that only a man and a woman of the same faith and nationality can wed in Israel? Why do we let the Chief Rabbinate decide which Jews can marry other Jews or anyone at all? Why do we let the rabbinate ordain an elite clique of male Orthodox clergy while marriage by rabbis from other streams is illegal? Why do we accept that adherents of faiths not recognized in Israel, or that don't meet the religious definition of any faith, are "religion-less" and can only marry one another?

Despite the lofty declarations to the contrary, Israel's unique political system has serious democracy issues. While it does indeed offer freedom of religion to those faiths recognized here, no citizen benefits from the right to freedom "from" religion. The absence of separation of religion and state in Israel means that households that fall outside the recognized definition of "family" - namely, a man and a woman of the same religion married by the requisite Orthodox rites - are discriminated against in recognition, rights and benefits. Issues of "personal status" remain the domain of religion, and there is no civil marriage, divorce or protection of human rights befitting the diverse society that is Israel.

Matters of personal status have an impact on every sphere of life in Israel, from the partner you can marry, to the authority that can marry you, your rights in divorce, fertility treatments, adoption, abortion, taxation, maternity rights, power of attorney, inheritance and more. While demographic and social changes have revolutionized the face of the family, the law has not evolved to meet the complex new reality. In Israel's nearly 65 years of statehood, our society has diversified, but our family law is still frozen in time. I estimate that today, only 58 percent of households meet the de-facto formula for family, leaving the remaining 800,000 units without the full recognition and protection of law.

For the estimated 42 percent of family units that fall outside the accepted formula, religious jurisdiction over personal status means that their union, and any children born into it, is discriminated against. In a nation where every citizen's personal status is determined by archaic, all-male religious bodies, inequality is ingrained in the very institutional fabric of life. So why is the legislature silent while almost half of Israeli families don't fit the conventional model of a father, mother, 2.4 children and a dog? Why is the legislature silent when women are excluded from some government ceremonies and from candidacy in certain political parties, when women's attire is regulated in certain public places and their voices silenced by self-proclaimed modesty guards? How can the legislature remain silent when even women who marry abroad are subject to extortion in the rabbinate should they want to divorce?

Family issues are systematically ignored by our decision makers and silenced by the media. Crucial issues like the status of families that aren't founded according to Jewish law, the legal and moral repercussions of use of reproductive technologies, and more - fail to receive the attention they deserve from our candidates and representatives. Though several parties address family-status issues in their current campaign platform, there's no indication that the status of the family - the most essential sphere of our personal lives - will be seriously addressed in this election.

The concept of what I call "family justice" is the aspiration to correct distortions and inequalities in marriage, parenting and family life for all of us in Israel. Family justice would start with the passage of a Basic Law, akin to a constitutional law, that recognizes all forms of families and parenting constellations, and establishes a system of genuine civil marriage that would be available to any two adult, single partners.

By Irit Rosenblum
Irit Rosenblum is the founder and executive director of the New Family Organization.
www.haaretz.com