When Israeli children will return to school 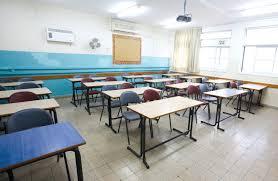 Tens of thousands of parents across Israel are still unsure if their youngest children will return to school on Sunday, and it is likely they won’t know until just before Shabbat. The government is expected to convene a meeting on Friday at 10 a.m. to decide whether preschoolers and students in first through third grades can return to their classrooms next week.

The discussions will be couched in data provided in a report by the Gertner Institute, which was presented to ministers late Wednesday night, and against the backdrop of a continued decline in the number of coronavirus cases. There are currently 6,720 active cases of COVID-19 in Israel, including 103 patients in serious condition and 83 who are intubated. At last count, 225 people had died.

About 1,040 children until the age of nine are infected, as are some 2,300 from ages 10 to 19. At press time, it appeared likely that grades one through three would resume, but daycare centers for children up to three years old would not, if the Health Ministry’s recommendations are accepted. It was still unclear what would happen regarding pre-kindergartens and kindergartens.

Preschool classes would be broken into shifts of 15 children each, and then those 15 children would be split into groups of seven or eight, a Health Ministry official said. The two groups would have different teachers, use different bathrooms and sinks, and keep as much distance from each other as possible. “It is a risk-management question,” a senior Health Ministry official said during a briefing on Thursday. “It all depends on what happens in two weeks. If the virus seems to have disappeared from Israel, we will continue to offer relief.”

The Health Ministry recommends waiting another week or two before making a decision on opening preschools and kindergartens. Israel is among the first countries to consider reopening schools, the senior official said. As the numbers indicate, children can be infected with coronavirus and can infect others. But the latest research shows that few children have gotten the coronavirus relative to their share of the population – and those who do get sick are more likely to be asymptomatic or develop mild symptoms.

The Health Ministry recommends opening elementary schools first because it believes it will be easier for six-, seven- and eight-year-olds to adhere to the restrictions than for babies or toddlers.  Teachers and parents took to the streets and social-media platforms on Thursday, including holding a large protest in Tel Aviv’s Habima Square, demanding answers. “Teachers demand rights!” they shouted.

Preschool and elementary school teachers are concerned the policies recommended by the Education Ministry for opening schools on Sunday will leave them at risk of contracting the virus. Also, daycare centers under government regulation have said they do not want to reopen because they do not have the backing of the government to step in and support them if the coronavirus spreads in their schools.

Among the issues that remain to be determined are how to handle recesses, whether children will be required to wear protective masks and who would be responsible for disinfecting classrooms and when,  former Health Ministry director-general Gabi Barbash told Israel’s N12. How school grounds will be divided among students or what role parents will play in keeping their children safe also remain to be determined.

Moreover, parents and teachers who are older or who have underlying medical conditions, or who have children with medical conditions, still do not know if they are supposed to send their kids to school and, if they do so, what is the risk.  Barbash said the government is putting a lot of weight on the Gertner study, which he feels is misplaced because it only studied some 562 families and 2,823 people in Bnei Brak.

The report, which was released to the media late Thursday, found that the chance of children getting sick increases with age. Also, babies less than a year old are more likely to become infected by their older siblings or parents, the study said.  The Gertner Institute report said that because of the potential of the education system’s impact on the spread of the virus, decision makers should “exercise caution at this stage, and the education system should open in stages and under constant monitoring.”

Barbash said he does not think schools are ready to take in children. “If it were my kid, I would not send him to school,” he said in a television interview.

But working parents and businesses argue that solutions must be offered. In a letter to Prime Minister Benjamin Netanyahu on Thursday night, Histadrut chairman Arnon Bar-David said: “The decision-making process of senior officials in the State of Israel is causing confusion and uncertainty. What dominates the discourse is contradictory instructions that are published at the last minute and that throw the entire Israeli economy into a tizzy.”

The Health Ministry and its director-general, Moshe Bar Siman Tov, have come under attack for making decisions that lack transparency or clarity. Netanyahu was blindly backing Bar Siman Tov “because it makes the situation easier for him,” a senior decision maker said. “We are taking illogical precautions at the expense of the people’s future and the future of our children,” he told N12. “They have managed to exhaust us all: Maybe that was the intention.”

Bar-David called on Netanyahu to offer an immediate response to reactivate the economy in a responsible way. For every week that preschoolers are not in school, the country loses about NIS 2 billion, N12 reported. The ministerial committee on restricted zones approved declaring such a zone in three neighborhoods on Thursday evening – Romema Central in Jerusalem and Nine and Ten in Hura – due to an increase in the number of people infected there with coronavirus.

This is not the first time a Jerusalem neighborhood has been restricted. On April 12, the Health Ministry restricted several neighborhoods and then lifted the restrictions after Jerusalem Mayor Moshe Lion committed to move infected patients to “coronavirus hotels.”

In a conversation with The Jerusalem Post on Wednesday, Barbash praised Lion’s efforts and said he believed the nation’s capital was making positive steps toward curbing the spread of coronavirus. As of Thursday morning, there were 1,988 active cases of coronavirus in the capital, according to the Health Ministry. Some 217 people have tested positive in the last three days. In Hura, a Bedouin town near Beersheba, there were 69 active cases. Some 30 people were diagnosed in the last three days.

In Beit Shemesh, there are 306 active cases. Public transportation will begin to operate during evening hours beginning next week, and Israel Railways will return to service in a limited capacity on Saturday night, officials announced Thursday.