Wheels down, Mars rover takes in the view 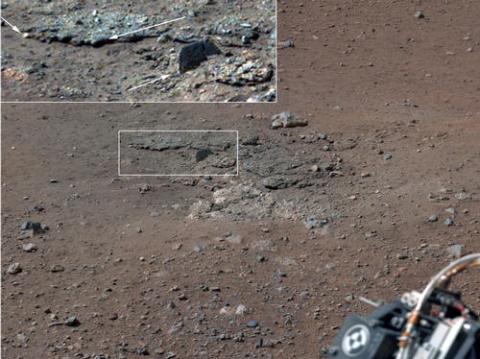 For the next few weeks, Mars’ newest inhabitant will stay put, easing its many instruments into action while snapping photos of its environs. For now, it appears that Curiosity — and all the instruments aboard — are healthy. “There’s a lot ahead of us, but so far we are just ecstatic about the performance of the vehicle,” said Jennifer Trosper, Mars Science Laboratory mission manager at JPL.

Though Curiosity won’t be stretching its wheels for a few weeks, the rover and its orbiting cousins are busy supplying scientists back home with pictures of the terrifying, seven-minute journey to the crater floor. “We’re going to make sure that we’re firing on all cylinders before we blaze out across the plains there,” said project scientist John Grotzinger of Caltech.

On August 6, a camera mounted on the rover’s belly returned a series of thumbnail images taken during the plunge into Gale Crater. Strung together into an animation, the 297 images span the descent, beginning with the spacecraft’s heat shield falling away and ending with billowing dust clouds kicked up during the rover’s retrorocket-powered, sky crane–mediated touchdown. A full-resolution video of the descent is expected in a few weeks, said Mike Malin, principal investigator for the Mars Descent Imager and president and chief scientist at Malin Space Sciences Systems in San Diego.

The belly-cam wasn’t the only instrument taking pictures during the rover’s daring skydive into Gale Crater.

An orbiting eye was also watching. From 340 kilometers away, the HiRISE camera aboard the Mars Reconnaissance Orbiter shot an image that shows the rover parachuting into the crater one minute before touchdown. “This was a great, great shot,” said JPL’s Sarah Milkovich, HiRISE investigation scientist. Also in the image: The spacecraft’s heat shield, falling toward Mars. Capturing the image required wrangling the orbiter into place and aiming the camera toward Curiosity, a maneuver the HiRISE team estimated had a 60 percent chance of succeeding.

Curiosity has also sent postcards from its new home in Gale Crater.

The first photo from the surface arrived late in the California evening on August 5, just after the landing, and shows the rover’s rear wheel in front of a field of gravel, with the crater rim rising in the background. “I think that is the best picture of Mars that I’ve ever seen,” Grotzinger said. He notes that it appears as though Curiosity is parked near the edge of an area where flowing water once swept materials over the crater wall and into the basin. “This [process] is bringing materials in from the rim, which is not our destination,” he said. “But we’re getting a free sample without having to drive over there, potentially.”

A later photo from the front of the rover shows Mount Sharp looming in the distance, a massive pile of sediments the likes of which doesn’t exist anywhere on Earth. Unlike large mountains on Earth, Mount Sharp appears to have formed as water and wind filled in the crater, depositing the layered sediments that created the peak. Then, erosion created a moat-like shape, leaving the mountain protruding from the middle of the crater.

Today, Mount Sharp resembles several places on Earth, but with the story of Mars’ environmental history tucked into its layers and awaiting Curiosity’s eager reading. Even with Mount Sharp calling from the horizon and tantalizing scientific treats underfoot, the rover’s team will take its time deciding where to send Curiosity first. “Be patient with us, please,” said project manager Pete Theisinger after touchdown. “Because we will be patient with Curiosity.”