What's Taking E.T. So Long to Find Us? 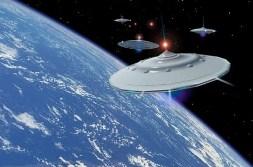 Mathematically speaking, ET would have found us by now -- if he exists -- so we’re being consciously avoided for some reason, a new study concludes. “We’re either alone, or they’re out there and leave us alone,” mathematician Thomas Hair, with Florida Gulf Coast University in Fort Myers, told Discovery News. Hair, who presented his research at the Mathematical Association of America in Boston earlier this month, based his approximation of what he considered to be extremely conservative estimates for how long it would take a society to muster up the resources and technological know-how to leave its home world and travel to another star. Even at the relatively sedate pace of 1 percent of light-speed, the aliens would arrive at their nearest neighbor star in about 500 years.

Light travels at about 186,000 miles per second. "They've either passed us by, or they stay around their home star systems and contemplate their navels," Hair said. There could be several reasons why we’re not listed in intergalactic Yelp. Perhaps most important is that we don't have anything aliens need. “Any ancient civilization is probably not biological. They don’t need a place like Earth. They don’t need to come here and steal our water. There’s plenty of it out in the outer solar system where the gravity is not so great and they can just take all they want,” Hair said.

Or perhaps modern-day extraterrestrials are following routes laid out long ago, all of which bypass Earth, he added. Whatever the reason we're being ignored, there is no chance ET, if he exists, does not know we are here, Hair said, pointing to telescopes, such as NASA's Kepler observatory, which can detect planets around other stars. If humans living on a planet that is roughly 5 billion years old have technology like Kepler, an alien civilization with another 10 million years of experience under its belt would have advanced much further, Hair maintains. “I’m sure they’d be able to detect if this planet had life on it. Just the CFCs (chlorofluorocarbons) in our atmosphere would give us away,” he said.

CFCs are compounds typically found in refrigerants and aerosol products that release chlorine atoms when exposed to ultraviolet light and erode Earth's ozone layer. University of Minnesota physicist Woods Halley, who just published a book about the prospects of extraterrestrial life, says we don’t know enough about how life got started on Earth to be able to recognize alien life, even if it were staring us in the face. "I think there are three options," Halley told Discovery News. "Life is rare, which I think has a reasonable probability of being correct. Life is weird -- every time you run into it, it's extremely different from the last time you saw it. Life is dull, meaning you will find something that looks a lot like life on Earth and our problems (in detecting life) are technical. "I've come to the view that they’re all possible, but the preponderance of evidence most likely fits the first -- we are rare,” Halley said.