What’s On the Other Side of a Black Hole? 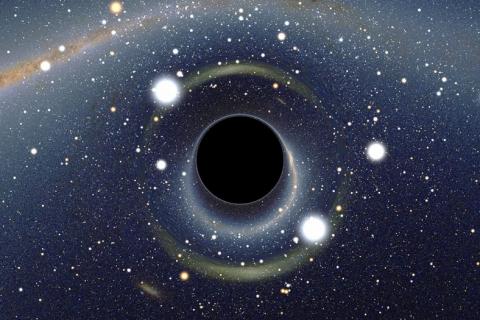 What would happen if you entered a black hole? Conventional wisdom has it that you would be crushed by the immense gravity. According to a new theory, you might actually pass through the event horizon into a wormhole and end up in another part of the universe.

To be fair, you would still be crushed. The exact fate of matter sucked into a black hole has long been the subject of debate, but the general view is that it all would be compressed into one point in space—the singularity. A rear exit would provide a place for matter to go instead of being completely smashed.

If both ends of the wormhole are close together, then in theory a traveler might end up at a different point in time.

It’s a wild idea. But wormhole theory has taken weird turns before. The basic principle is that a black hole’s gravity is so strong that it bends space-time itself. Envision the universe as a sheet of paper. If some force folds part of that paper, then two non-continuous pieces of the paper touch. If an object on one part of the sheet crosses over the fold, when the sheet straightens out, that object finds itself still on the paper but distant from its starting point. Now, consider that the piece of paper contains both space and time. If both ends of the wormhole are close together, then in theory a traveler might end up at a different point in time. 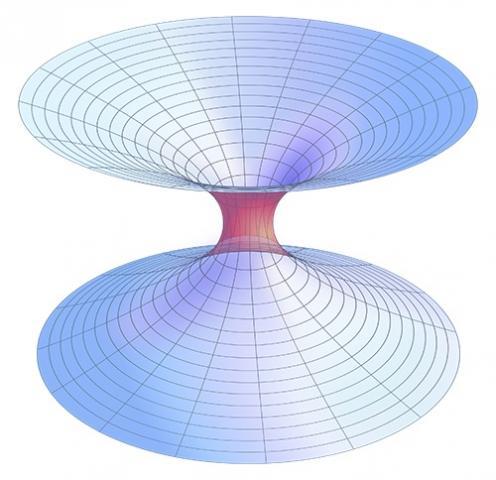 The wormhole, for obvious reasons, is a staple of science fiction. But it’s a pretty well established idea in actual science, too.

Einstein (and some earlier theorists) first predicted wormholes in the Theory of General Relativity. Wormholes even have a name, Einstein-Rosen Bridge, after Einstein and his colleague Nathan Rosen. Einstein’s wormholes are often described as linking different universes rather than different parts of the same universe. Continuing the sheet of paper analogy, imagine that a strong force pulls together two points, each on two different sheets of paper. An object at the connection point could therefore cross from one piece of paper to another, i.e. cross into a completely separate universe. Combining the concepts, it might even be possible to wind up back in time in a different universe.

Unfortunately, the new research, while providing more theoretical insight into the structure of black holes, does not put interstellar travel within reach. Even if black holes are permanently open wormholes as postulated, it still is not possible for anything to cross intact without being crushed. Matter falling into the black hole would be spit out the other side, but not in the same condition it went in. And the gravity is so great that any wormhole would not stay open longer than an instant. Still, there’s no real way to know for sure without trying it. (Any volunteers?)