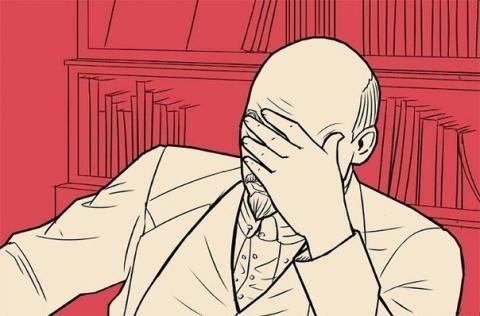 A hundred years after the Russian Revolution, can a phoenix rise from the ash heap of history?

“Ura! Ura! Ura!” I vividly remember the wall of sound as stern, gray-uniformed soldiers met their commander’s greeting: “Congratulations on the 70th anniversary of the Great October Socialist Revolution!” An exchange student in Moscow in 1987, I had traveled to Gorky Street on that crisp November morning to see the military parade making its way to Red Square. A row of assembled Soviet and foreign dignitaries presided as the young servicemen paid homage at Lenin’s Mausoleum. This impressive-seeming display was to showcase the enduring revolutionary energy of Communism and its global reach.

The Soviet leader, Mikhail Gorbachev, spoke of a movement reinvigorated by the values of 1917 before an audience of left-wing leaders that included Oliver Tambo of the African National Congress and Yasir Arafat of the Palestine Liberation Organization. Banners bore the poet Vladimir Mayakovsky’s proclamation “Lenin lived, Lenin lives, Lenin will live forever!” The claim had a hollow ring, for the economic problems of the U.S.S.R. were evident to all, especially my Russian student friends, dependent on poorly provisioned universities for food. Even so, the system still seemed as solid as the mausoleum’s marble. I, like most observers, would not have believed that within two years Communism would be crumbling, and within four, the Soviet Union would itself have collapsed.

Soon, popular views of 1917 changed entirely: Unfettered markets seemed natural and inevitable, while Communism appeared to have always been doomed to Leon Trotsky’s “dustbin of history.” There might be challenges to the globalized liberal order, but they would come from Islamism or China’s state capitalism, no longer a discredited Marxism. Today, as we mark the centenary of the February Revolution — prequel to the November coup of Lenin’s Bolsheviks — history has turned again. China and Russia both deploy symbols of their Communist heritage to strengthen an anti-liberal nationalism; in the West, confidence in free-market capitalism has not recovered from the financial crash of 2008, and new forces of the far right and activist left vie for popularity. In America, the unexpected strength of the independent socialist Bernie Sanders in last year’s Democratic race, and in Spain, the electoral gains of the new Podemos party, led by a former Communist, are signs of some grass-roots resurgence on the left. In 2015 Britain, Marx and Engels’s 1848 classic, “The Communist Manifesto,” was a best seller.

So did I witness Communism’s last hurrah that day in Moscow, or is a Communism remodeled for the 21st century struggling to be born? There are hints of an answer in this complex, century-long epic, a narrative arc full of false starts, near-deaths and unpredicted revivals. Take the life of Semyon Kanatchikov. The son of a former serf, he left rural poverty for a factory job and the thrill of modernity. Energetic and sociable, Kanatchikov set out to improve himself with “The Self-Teacher of Dance and Good Manners” as his guide. Once in Moscow, he joined a socialist discussion circle, and ultimately the Bolshevik party.

Kanatchikov’s experience made him receptive to revolutionary ideas: a keen awareness of the gulf between rich and poor, a sense that an old order was blocking the rise of the new, and a hatred of arbitrary power. Communists offered clear-cut, convincing solutions. Unlike liberals, they championed economic equality; but unlike anarchists, they embraced modern industry and state planning; and against moderate socialists, they argued that change must come through revolutionary class struggle.

In practice, these ideals were difficult to combine. An over-powerful state tended to stifle growth while elevating new elites, and the violence of revolution brought with it periodic hunts for “enemies.” Kanatchikov, too, became a victim. Though awarded prestigious appointments after the revolution, his association with Stalin’s archrival, Trotsky, brought about his demotion in 1926. By then, the outlook for Communism was grim. The first flames of revolution in Central Europe in the aftermath of World War I had been extinguished. The U.S.S.R. found itself isolated, and Communist parties elsewhere were small and beleaguered. The American-forged modernity of the Roaring Twenties was unapologetically consumerist, not communist.

But the flaws of laissez-faire soon came to Communism’s rescue. The Wall Street crash of 1929 and the Depression that followed made socialist ideas of equality and state planning a compelling alternative to the invisible hand of the market. Communist militancy also emerged as one of the few political forces prepared to resist the threat of fascism.

Even the unpromising terrain of the United States, uncongenial to collectivism and godless socialism, became fertile ground. Aided by Moscow’s abandonment in 1935 of its sectarian doctrine for a policy of supporting “popular fronts,” American Communists made common cause with moderate leftists against fascism. Al Richmond, a New York journalist at The Daily Worker, recalled the new optimism as he and his colleagues spent evenings in an Italian restaurant drinking toasts “to life as it was just then, to that era, to its portents and hopes, sure of our responses to the rhythm of this time, for in it we heard our own beat.”

Such optimism was shared by a select group. A victim of Stalin’s purges, Semyon Kanatchikov died in the gulag in 1940. Many were willing to overlook Stalin’s Terror for the sake of anti-fascist unity. But Communism’s second coming in the late ’30s and early ’40s did not long outlast the defeat of fascism. As the Cold War intensified, Communism’s identification with Soviet empire in Eastern Europe compromised its claim to be a liberator. In Western Europe, a reformed, regulated capitalism, encouraged by the United States, provided higher living standards and welfare states. Command economies that made sense in wartime were less suited to peace.

But if Communism was waning in the global North, in the South it waxed. There, Communists’ promises of rapid, state-led modernization captured the imagination of many anticolonial nationalists. It was here that a third red wave swelled, breaking in East Asia in the 1940s and across the post-colonial South from the late 1960s. For Geng Changsuo, a Chinese visitor to a model collective farm in Ukraine in 1952 — three years after Mao Zedong’s Communist guerrillas entered Beijing — the legacy of 1917 was still potent. A sober peasant leader from Wugong, a village about 120 miles south of Beijing, he was transformed by his trip. Back home, he shaved his beard and mustache, donned Western clothes and evangelized for agricultural collectivization and the miraculous tractor.

Revolutionary China only strengthened Washington’s determination to contain Communism. But as America fought its disastrous war in Vietnam, a new generation of Marxist nationalists emerged in the South, attacking the “neo-imperialism” they believed their moderate socialist elders had tolerated. The Cuban-sponsored Tricontinental Conference of African, Latin American and Asian socialists in 1966 introduced a new wave of revolutions; by 1980, Marxist-Leninist states extended from Afghanistan to Angola, South Yemen to Somalia.

The West also saw a Marxist revival in the ’60s, but its student radicals were ultimately more committed to individual autonomy, democracy in everyday life and cosmopolitanism than to Leninist discipline, class struggle and state power. The career of the German student firebrand Joschka Fischer is a striking example. A member of a group named Revolutionary Struggle who tried to inspire a Communist uprising among autoworkers in 1971, he later became a leader of the German Green Party.

The emergence from the late ’70s of an American-led order dominated by global markets, followed by the fall of Soviet Communism in the late ’80s, caused a crisis for the radical left everywhere. Mr. Fischer, like many other 1960s students, adapted to the new world: As German foreign minister, he supported the 1999 American bombing over Kosovo (against the forces of the former Communist Serbian leader Slobodan Milosevic), and he backed Germany’s welfare cuts in 2003. In the South, the International Monetary Fund forced market reforms on indebted post-Communist countries, and some former Communist elites proved eager converts to neoliberalism. Only a handful of nominally Communist states now remain: North Korea and Cuba, and the more capitalist China, Vietnam and Laos. Today, more than a quarter-century after the collapse of the U.S.S.R., is a fourth incarnation of Communism possible?

One major obstacle is the post-’60s split between an old left that prioritizes economic equality and the heirs of Mr. Fischer, who stress cosmopolitan values, gender politics and multiculturalism. Moreover, championing the interests of the underprivileged on a global scale seems an almost impossible task. The 2008 crash only intensified the left’s dilemma, creating an opportunity for radical nationalists like Donald J. Trump and Marine Le Pen to exploit anger at economic inequality in the global North.

We are only at the beginning of a period of major economic change and social turmoil. As a highly unequal tech-capitalism fails to provide enough decently paid jobs, the young may adopt a more radical economic agenda. A new left might then succeed in uniting the losers, both white-collar and blue-collar, in the new economic order. Already, we’re seeing demands for a more redistributive state. Ideas like the universal basic income, which the Netherlands and Finland are experimenting with, are close in spirit to Marx’s vision of Communism’s ability to supply the wants of all — “from each according to his ability, to each according to his need.”

This is all a long way from Moscow’s Red Square in 1987, even farther from Petrograd’s Winter Palace in 1917. There will be no return to the Communism of five-year plans and gulags. Yet if there is one thing this turbulent history teaches us, it is that “last hurrahs” can be as illusory as the “end of ideology” predicted in the 1950s or Francis Fukuyama’s “end of history” of 1989. Lenin no longer lives, the old Communism may be dead, but the sense of injustice that animated them is very much alive.