What Israel can teach the world about beating a pandemic 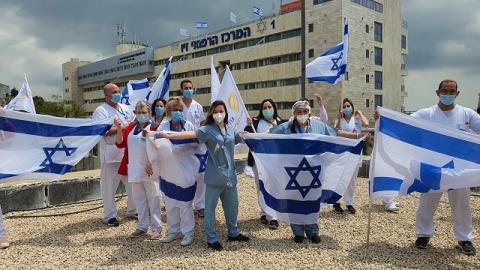 Instead of falling victim to the Covid-19 crisis, Israel faced it head on. Now as corona wanes in Israel, we look back on how it achieved victory over this first outbreak with relatively few deaths.  Israel, the Startup Nation, has been able to contain Covid-19 and has slowly begun reopening the country’s economy. As we ease into a “new normal,”we can now look back at how Israel has been able to overcome this pandemic with relatively few (279 to date) deaths.

Israel’s best practices could serve as an example to US states and other countries currently working to reopen their economies amid a shrinking number of infections.

Israel’s strategy to close its borders to outside travelers in early March and take aggressive measures to lock down the country was not a given. When you look at countries such as Sweden that opted for herd immunity, they basically sacrificed their elderly and immunocompromised citizens. Sweden, with a population close in number to Israel’s, has suffered an exponentially greater number of deaths (3,992) by letting the virus spread.

At the beginning, Israelis debated about whether putting the economy on hold was a sound decision. Citizens of a democracy can freely challenge their elected government and media. Nevertheless, Israelis by and large accepted isolation and lockdown, and it proved effective.

Tracking the spread: AI and tech

In contrast to Americans, the Israeli population is used to dealing with the fine line between security and civil liberties. However, some Israeli populations were not responsive to being stuck in lockdown and had to learn to adjust. The real hero here is artificial intelligence (AI), which helped track those who were infected by the virus as a tool for limiting exposure. Israel’s use of data was key in helping stop the spread of the virus.

“Israel strictly monitored people with Covid-19 using digital tracking and apps. Moreover, the country was put under curfew twice — on Passover night and on Independence Day,” notes Noa Lavie, a senior lecturer at the Academic College of Tel Aviv-Yaffo.

There are conversations being had in other parts of the world on whether tracking, or tracing, could be an effective way to stop this virus. Granted, this would be hard to enact in places like the United States as the population is not used to being tracked and where civil liberties trump all other rights.

There has been a lot of data showing that the sooner a country acted, the easier it was to track and contain this virus. Israel closed its borders quickly and acted as if the country had a contingency plan for a pandemic. Israel was ready mentally and had the infrastructure to close large parts of the country to battle the virus.

The challenge many US states face is not simply their size, but the fact they are part of a federal system. In Israel this was all centralized in one location and, while not everything went as planned, the country was able to overcome setbacks.

In places like the United States, this would prove more difficult, but there are lessons here that individual states can learn from how Israel handled this challenge.

Using a variety of new solutions

There is still so much we don’t know about this virus and how it interacts with different drugs and treatments. An example is the use of ventilators that only a month ago were considered standard practice. Israel, which has an advanced healthcare system, was able to try different treatments and to challenge the wisdom of using ventilators.

Both the innovations themselves and Israel’s resilience — a big part of innovation — helped the country through this crisis. It’s not clear which aspect carried more weight. Putting aside the race for a vaccine, some of the innovations that entrepreneurs created included the contact-free kiosks Israel developed for testing or this device that purifies hospital air.

All these startups helped ease the situation for healthcare workers. In general, Israeli entrepreneurs rose to the occasion, and used this time to create solutions to combat Covid-19. Instead of falling victim to the situation, the country faced it head on.

Regarding the near future of startups after Covid-19, there could be some upside as many workers who were laid off will look to build the next generation of businesses to solve Covid-19 related problems.

A sense of mission

While people in Israel can seem rough around the edges, the country’s citizens care deeply about their neighbors and the future of their country. If there is one thing we learned from the coronavirus, it is that one’s actions can impact the health of strangers, some of whom could become very ill by one’s negligence. Places like the United States and Europe could learn from Israel’s mindset during this crisis.

Some Americans feel like they are under attack, and a warlike atmosphere has taken over the globe. But for Israelis this was just another saga in the country’s fight for its very existence. There was a shared sense of helping one’s neighbors as well as persevering and knowing that the country will get through this to the other side. US states can learn from this example as they slowly begin to reopen.

New Jersey-Israel Commission Executive Director Andrew H Gross points out that his state, hard hit by Covid-19, mounted a strong response. “I have seen tremendous collaboration across every state agency, including with my commission, to throw everything we have against this virus. New Jersey – Israel cooperation has really contributed to this mission and I’m proud of it.”

Gross added, “We saw high-level exchanges between counterparts in addition to a call Governor Phil Murphy received from Israeli President Reuven Rivlin last week. During this crisis flights continued to fly between Newark and Tel Aviv, medical and pharmaceutical experts on both sides of the Atlantic communicated with one another, and there has been an ongoing flow of Israeli innovations to New Jersey that our state has been able to look at.”