What eating a big meal does to your body 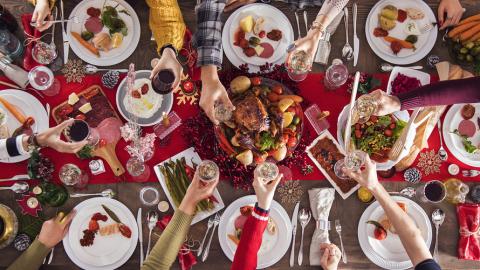 I am pretty confident that I can predict how I am going to feel after New Year's feast: snoozy, sluggish and definitely full. But by lunchtime the next day I am sure I will find room for another roast. When you think about it, it is pretty weird that the day after an enormous meal we can eat exactly the same quantity again. Did we not learn our lesson the first time?

Why do we still feel hungry after feast? Does overeating “stretch” your stomach, meaning you have more room for food the following day? Even thinking about it now is making me hungry. The answer is, for most people, you don’t feel hungry in spite of the huge quantities of food you’ve recently consumed. You feel hungry precisely because of it.

But first, what is this sensation of hunger? The pang you feel that urges you to eat is the result of a number of physiological changes inside your body. It is true that your stomach changes in size when hungry or full. The stomach contracts as a meal is digested to help move food towards the intestines. It rumbles as air and food move around as food is pushed down, a phenomenon called borborygmus, which is often our first cue that we might be hungry because it is audible and physical. After rumbling, the stomach then expands again in preparation for eating – this is initiated by hormones.

But it is not really true that eating stretches the stomach. The stomach is very elastic, so will return to its resting capacity (about 1-2 litres) after a big meal. In fact, most people’s stomachs are pretty similar in capacity – neither height nor weight have an effect.

What we might not be conscious of is the release of our hunger hormones: NPY and AgRP from the hypothalamus, and ghrelin from the stomach. Ghrelin is released when the stomach is empty and stimulates the production of NPY and AgRP in our brain. These two hormones are responsible for creating the feeling of hunger and overriding the hormones that give us the sense of being satisfied.

Perhaps counter-intuitively, ghrelin levels tend to be higher in lean individuals and lower in people with obesity. You might expect that a hormone that stimulates hunger would be more present in people who eat more – but this contradiction probably reflects how complicated our endocrine system is.

While only three hormones are largely responsible for generating feelings of hunger, a dozen or so are required to make us feel sated. A couple of them, GIP and GLP-1, are responsible for stimulating the production of insulin to regulate the metabolism of carbohydrates. Several more hormones are involved in slowing down the movement of food through our stomach, to give our bodies time to digest the food. For those people with obesity who have low levels of ghrelin, it might be that high levels of insulin, needed to metabolise a high-carbohydrate diet, are inhibiting production of ghrelin.

Two are key to reducing the feeling of hunger: CKK and PYY. In patients who have a gastric band fitted, which reduces the size of the stomach, PYY is particularly high. This contributes to a loss of appetite.

Even though your stomach has a hormonal system for telling your brain when it is empty, this is often augmented by the learned association between times of day and feeling hungry. So, even if you had a large lunch, you may well still feel hungry at dinner. “If you repeatedly grab a piece of chocolate or crisps after dinner when you sit on the couch to watch TV, our body can start to associate sitting on the couch, TV and eating something nice, and as a result when you go to the couch you experience a craving,” says Karolien van den Akker, a researcher at Centerdata and formerly Maastricht University. “That can even occur when you are sated; when your energy stores are full.”

Overeating is not bad per se, says van den Akker. Unlike a clinical diagnosis of binge eating where very large amounts of food are consumed in a short amount of time, often associated with feelings of disgust, guilt or shame, overeating may simply be seen as a habit they would like to break. But learned food cravings can also make it very difficult to successfully stick to a diet.

When we learn to associate the rewarding properties of food, particularly high-sugar foods, with specific times, smells, sights and behaviours, the memory of that sensation is activated and you start craving. This then triggers not only psychological but physiological responses, like salivating.

You might be familiar with Pavlov’s dog – an experiment in which a bell is rung at mealtimes so that a dog associates the bell with receiving food. Eventually, the dog salivates at the ringing of the bell alone. Humans are not much more sophisticated than dogs in this regard. In another experiment, people were shown simple shapes – circles and squares. When they saw the squares, they were given a piece of chocolate and thereafter began to crave chocolate whenever they were shown the squares again. Like dogs, humans can be conditioned to expect food based on simple cues.

“These associations develop quickly and even with small amounts of chocolate like 1-2g,” says van den Akker. “It seems quite easy to acquire these desires but it is hard to get rid of them. Your body remembers that at one specific point in time you ate chocolate. The craving can easily turn into a daily craving – even after only four days of repetition.”

Sometimes even our mood can become the trigger for conditioning. People commonly report they have less self-control if they are in a bad mood or tired. “In that case emotions can directly become associated with tasty food, so then the bad emotion could trigger the craving,” says van den Akker.

In principle, any mood, even a positive one, can become a craving trigger, as long as it is consistently followed by food. And it has been repeatedly shown that we eat more when we are in the company of friends. Even when you control for alcohol, special occasions, the length of time you spend at the table and many other factors, we eat more when we are being social. Perhaps because the pleasure of the company around us makes it harder to concentrate on portion control. Even people sat in a lab eating a bowl of plain pasta will eat more if they have a friend to talk to.

This knowledge has implications for breaking bad eating habits, too. “When we are trying to help people to eat less, we focus on “unlearning” their learned eating desires. Here, we also try to make sure they learn that eating something nice once does not mean that you have to do it on the next days, too,” says van den Akker. This is important because other studies have shown that breaking a good eating habit once can be enough to relapse into a bad habit.

Perhaps it is no surprise, then, how hungry we feel after a big meal with family and friends. We are still hungry the next day – or even later the same day – not because our stomach has stretched, but because we have grown accustomed to eating excessively on special occasions. If our brains see all the cues – the smells, the sights, the sounds – associated with a big meal the day after a feast like New Year's meeting, then it will start getting us ready for round two.