What Do Shoah Trips Teach Our Youth? 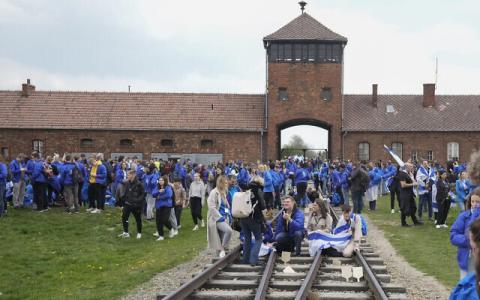 Many reasons have been given for temporarily stopping trips for high school students to see the extermination camps built by Nazi Germany in occupied Poland during World War II: the coronavirus pandemic, the Polish authorities’ criticism of the security arrangements for the delegations and of the trip’s content, as well as disagreements about the nature of these trips and their purpose in Israel.

This break is an opportunity to hold a fundamental discussion in Israeli society – and not just in the government ministries – about historical knowledge and what we want to teach our youth.

The focus on the German extermination camps in Poland is understandable: They were the most deadly and extreme culmination of what the Nazis called the “Final Solution” to the Jewish problem. In the occupied countries, the Nazis found governments, political parties and people who abetted them – but the Holocaust was the Nazis’ plan to eradicate the Jewish presence in Europe and ultimately in the entire world, and was part of the comprehensive racist ideology of their totalitarian regime. Without understanding this context of the death camps in Poland, one cannot properly comprehend a visit to them, and this can lead to a distorted historical understanding of the Nazi atrocities wrought by the Holocaust. The trips cannot ignore what occurred in Germany when the Nazis came to power, and these trips should begin in Germany and then continue to Poland, as is the case when they are organized by the Israel Defense Forces.

The trip must begin in Germany, where students will learn about the Nazi ideology, the elimination of democracy, the construction of concentration camps for opponents of the regime – liberals, socialists, communists – and the dispersal of their political parties, about the arrests and murders of homosexuals, of Gypsies and of opponents of the Nazi dictatorship from within the churches. Visiting a camp like Dachau will illustrate the meaning of the Nazi tyranny, as will descriptions of the killings and the torching of synagogues on Kristallnacht.

The trip to Germany should conclude with a visit to the Wannsee Villa on the outskirts of Berlin, where in January 1942 top German government officials discussed the annihilation of European Jewry, not as if they were discussing mass murder but as if it were merely a technical issue involving a population census and transportation arrangements. The chasm between the seeming normalcy of the administrative discussion that took place in the relaxed atmosphere of a charming villa and the murderous content of the discussion only heightens the horror. Many of the conference’s participants were never made to face justice for their part in planning the largest organized mass murder in history.

Only after presenting the nature of the Nazi regime to the students can the trips continue to Poland. Young Israelis must receive an accurate historical picture that shows that after Jews, the Poles became the main target of the German racial policy. The Germans did not designate the Poles for mass extermination like the Jews – according to the Nazi racial hierarchy, they were destined to be woodcutters and water-carriers for the German master race in Eastern Europe. Therefore, the German authorities made do with breaking apart the Polish nation. They eliminated its institutions, closed its universities and killed many of the elite. It is important for Israeli youths to know that the Germans killed 3 million non-Jewish Poles, in addition to 3 million Jewish Poles.

This has not stopped many Poles from showing indifference to the annihilation of Polish Jewry; and there were also many Poles who informed on Jews, who turned them in to the Germans or even participated in their killing, such as the massacre in the Jedwabne forest in 1941. This only makes the heroism and integrity of the Polish Righteous Among the Nations all the more worthy of appreciation and recognition. The reality is indeed complicated. Despite the current nationalist Polish government’s attempts to obscure Poles’ role in the Holocaust, it is impossible to ignore the Polish argument that Poland was the only country in occupied Europe where the government did not cooperate with the Germans.

All of this must be presented to the participants in the trips to Germany and Poland. The Germans may not like having large groups of young Israelis visit the country in connection with the Holocaust, particularly after Germany took responsibility for it and today is a true friend of Israel. I also do not recommend that members of the Israeli delegations march around Germany wrapped in the Israeli flag. A silent march to Dachau would be much more impactful, and similar sensitivity should be employed in the marches in Poland. The profound antisemitism that existed in parts of Polish society cannot be ignored, but the focus must be on the horror that came out of the Nazi regime in Germany, even if the extermination camps were located in occupied Poland.