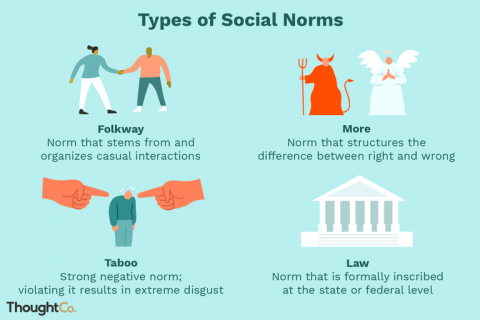 In what may come as a surprise to freethinkers and nonconformists happily defying social conventions these days in New York City, Paris, Sydney and other centers of Western culture, a new study traces the origins of contemporary individualism to the powerful influence of the Catholic Church in Europe more than 1,000 years ago, during the Middle Ages.

According to the researchers, strict church policies on marriage and family structure completely upended existing social norms and led to what they call “global psychological variation,” major changes in behavior and thinking that transformed the very nature of the European populations.

The study, published this week in Science, combines anthropology, psychology and history to track the evolution of the West, as we know it, from its roots in “kin-based” societies. The antecedents consisted of clans, derived from networks of tightly interconnected ties, that cultivated conformity, obedience and in-group loyalty—while displaying less trust and fairness with strangers and discouraging independence and analytic thinking.

The engine of that evolution, the authors propose, was the church’s obsession with incest and its determination to wipe out the marriages between cousins that those societies were built on. The result, the paper says, was the rise of “small, nuclear households, weak family ties, and residential mobility,” along with less conformity, more individuality, and, ultimately, a set of values and a psychological outlook that characterize the Western world. The impact of this change was clear: the longer a society’s exposure to the church, the greater the effect.

Around A.D. 500, explains Joseph Henrich, chair of Harvard University’s department of human evolutionary biology and senior author of the study, “the Western church, unlike other brands of Christianity and other religions, begins to implement this marriage and family program, which systematically breaks down these clans and kindreds of Europe into monogamous nuclear families. And we make the case that this then results in these psychological differences.”

In their comparison of kin-based and church-influenced populations, Henrich and his colleagues identified significant differences in everything from the frequency of blood donations to the use of checks (instead of cash) and the results of classic psychology tests—such as the passenger’s dilemma scenario, which elicits attitudes about telling a lie to help a friend. They even looked at the number of unpaid parking tickets accumulated by delegates to the United Nations.

“We really wanted to combine the kinds of measures that psychologists use, that give you some control in the lab, with real-world measures,” Henrich says. “We really like the parking tickets. We get the U.N. diplomats from around the world all in New York City and see how they behave.”

The policy has since changed, but for years diplomats who parked illegally were not required to pay the tickets the police wrote. In their analysis of those tickets, the researchers found that over the course of one year, diplomats from countries with higher levels of “kinship intensity”—the prevalence of clans and very tight families in a society—had many more unpaid parking tickets than those from countries without such history. Diplomats from Sweden and Canada, for example, had no outstanding tickets in the period studied, while unpaid parking tickets per diplomat were about 249 for Kuwait, 141 for Egypt and 126 for Chad. Henrich attributes this phenomenon to the insular mind-set that is characteristic of intense kinship. While it builds a close and very cooperative group, that sense of cooperation does not carry beyond the group. “The idea is that you are less concerned about strangers, people you don’t know, outsiders,” he says.

The West itself is not uniform in kinship intensity. Working with cousin-marriage data from 92 provinces in Italy (derived from church records of requests for dispensations to allow the marriages), the researchers write, they found that “Italians from provinces with higher rates of cousin marriage take more loans from family and friends (instead of from banks), use fewer checks (preferring cash), and keep more of their wealth in cash instead of in banks, stocks, or other financial assets.” They were also observed to make fewer voluntary, unpaid blood donations.

In the course of their research, Henrich and his colleagues created a database and calculated “the duration of exposure” to the Western church for every country in the world, as well as 440 “subnational European regions.” They then tested their predictions about the influence of the church at three levels: globally, at the national scale; regionally, within European countries; and among the adult children of immigrants in Europe from countries with varying degrees of exposure to the church.

Henrich notes that the church’s focus on marriage proscriptions rose to the level of obsession. “They came to the view that marrying and having sex with these relatives, even if they were cousins, was something like sibling incest in that it made God angry,” he says. “And things like plagues were explained as a consequence of God’s dissent.”

The Western, educated, industrialized, rich and democratic (WEIRD) societies of Western Europe and what the authors call “their cultural descendants in North America and Australia” have long been recognized as outliers among the world’s populations for their independence of thought and other traits, such as a willingness to trust strangers.

The new paper is the first to systematically link that psychological variation to the Western church. “This study is truly novel and uniquely interdisciplinary,” says Thomas Talhelm, an associate professor of behavioral science at the University of Chicago Booth School of Business, who was not involved with the work. “If we were to survey researchers in anthropology, cultural psychology, and evolution and ask them what explains Western WEIRD-ness, we would get all sorts of answers. And few would focus specifically on the church or the nuclear family.”

As for the impact of the paper on those disciplines, Talhelm expects that some people will object to the sweeping nature of its conclusions. “Any time a theory of human culture scales up so big, there will be local exceptions and unique cases,” he says. “Some researchers are deeply wary of generalizations, of large theories. Yet that wariness will overlook the usefulness of the theory and the consistency of the findings.”