The war veteran raised more than £32m for the NHS 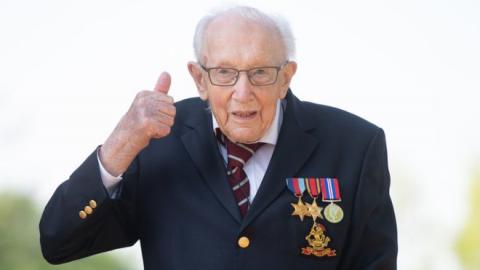 Captain Tom Moore says he feels "honoured and humbled" after being awarded the Freedom of the City of London in a virtual ceremony. The war veteran raised more than £32m for the NHS by completing 100 laps of his Bedfordshire garden by the time he reached his 100th birthday in April.

The freedom of the city dates back to 1237 and is offered to individuals to celebrate a significant achievement. He was given the honour in a virtual ceremony, streamed on YouTube. It is the first time the ceremony - usually held in London's medieval Guildhall and for invited guests only - has been broadcast by video-link.

Capt Tom said: "I am deeply honoured to be granted the Freedom of the City of London. "I remain humbled by the love and gratitude that I have received from the British public, and this honour is something that I will truly value for the rest of my life."

The centenarian had initially set out to raise £1,000 for NHS charities by walking laps of the 25-metre (82ft) loop in his garden in Marston Moretaine. But he eventually raised £32,794,701 from more than one and a half million supporters.

William Russell, Lord Mayor of the City of London, nominated Capt Tom for the award and said the veteran was a "credit to this country". Catherine McGuinness, from the City of London Corporation who also endorsed Capt Tom's nomination said: "I am very happy to send my warmest congratulations to Captain Moore on his admission to the Freedom, which we are, quite literally, making a virtual reality."

People can become a Freeman by paying a fee or as a reward for public service. However, many of the so-called traditional privileges associated with the honour, such as driving sheep over London Bridge, no longer exist. Capt Tom, who was born in Keighley in what was then the West Riding of Yorkshire, captured the hearts of the nation and his birthday celebrations were extensive.

The occasion was marked with an RAF flypast as well as birthday greetings from the Queen and prime minister. He was also made an honorary colonel by the 1st Battalion The Yorkshire Regiment, in which he had served during World War Two, and received an estimated 140,000 cards.