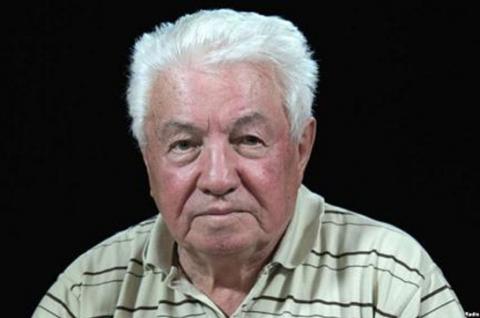 Soviet dissident writers always had biographies that looked like roller coasters, with dizzying ascents and vertiginous crashes to the ground. The writer Vladimir Voinovich, who died late Friday night from a heart attack at the age of 85, was tossed up and down by fate faster and more dramatically than others.

He was the son of a Jewish mother and a journalist father who was repressed during the Stalinist purges. Although he miraculously avoided a death sentence, his father spent five years in the camps. Both parents’ biographies would have made Voinovich persona non grata in Soviet literature, but his talent, perseverance and sheer good luck opened doors to literary journals and publishing houses, and made him a member of the Soviet Writers’ Union.

In 1956 Voinovich moved to Moscow. He didn’t have a higher education, and so in order to get a residence permit in the capital, he got a job as a construction worker. He lived in a dormitory where he didn’t even have a desk. At night he’d go into the hallway — so he wouldn’t disturb his wife and newborn daughter — and write verse on a board he balanced on his knees. After a hard day at work he’d go halfway across Moscow to take part in literary workshops. He tried to get into the Literature Institute twice, and twice he was turned down.

But by 1960 he had gotten his first literary job as the junior editor of a nationwide radio station, writing sketches and song lyrics. A song he wrote about space travel — which had cultish popularity at the time — was the winning ticket in the Soviet literary lottery. One of the listeners who liked it was General Secretary Nikita Khrushchev, and immediately a magic wand was waved and Voinovich received enticing offers from radio, television and publishing houses. And of course, author’s fees came in, too. Voinovich used one of his first payments to buy himself a motorcycle, which he parked at night, for safety, in the hallway of his communal apartment, shared by 25 families. But his neighbors didn’t say a word — Voinovich’s instant fame made him almost a demigod in their eyes.

In 1961 Voinovich published his first prose in the journal “Novy Mir,” the flagman of liberal literature during the Khrushchev era of the “Thaw.” The journal announced the publication of Voinovich’s forthcoming novel — “The Life and Extraordinary Adventures of the Soldier Ivan Chonkin” — but that didn’t happen. The novel turned out to be such a relentless satire of the regime that there was no sense in even showing it to the censor.

When he understood that “Chonkin” would never see the light of day in the Soviet Union, Voinovich sent it abroad, where it was published in 1969. And with that, all the might of the Soviet repressive system crashed down on him. An aggravating circumstance of Voinovich’s “crime” was his friendship with dissidents and participation in the human rights movement. He signed several collective letters to the authorities defending repressed writers and stood for days outside buildings where dissidents were being tried in “open courts” — but where the public was never allowed in.

For all these “sins” Voinovich was expelled from the Writers’ Union in 1974, and starting in 1975 he was frequently called in for questioning by the KGB. One of those interrogations almost proved fatal: the KGB officers secretly switched Voinovich’s cigarettes for another pack with cigarettes filled with an unknown poison. After the interrogation Voinovich had trouble concentrating and forming thoughts, and he had high blood pressure and rapid pulse.

In the opinion of renegade KGB general Oleg Kalugin, who might be considered an expert in this field — he organized the poisoning of dissidents abroad — Voinovich was given a dose of a strong psychotropic drug which was intended to wipe out his memory and damage his ability to express himself.

Politburo documents opened after the collapse of the Soviet Union show that “the case of Voinovich” had been discussed many times at the highest level of government. Eventually, in 1980 Voinovich was invited to leave the country.

It is usually thought that Voinovich was exiled from the Soviet Union. This is both true and false. Voinovich left of his own will after being invited to give a series of lectures in Germany. But as Voinovich himself wrote, “My departure was voluntary like a person who voluntarily takes his wallet out of his pocket and hands it to a robber who is holding a knife to his throat.” The only thing he could look forward to in the Soviet Union was another poisoning.

In 1981 in violation of Soviet law, Voinovich was stripped of his Soviet citizenship. Voinovich responded with a sharply-worded and caustic letter to Leonid Brezhnev, then General Secretary of the Communist Party, which included the prophetic lines: “I am absolutely certain that soon all of your decrees depriving our poor homeland of its cultural riches will be rescinded.” He also predicted just as accurately that the works of Brezhnev would be nothing but scrap paper while Soviet citizens would be enjoying “Chonkin.”

His predictions came true in less than 10 years. In 1990 Voinovich had his Soviet citizenship returned, and a few years later, at the peak of his popularity, he came back home.

Today perhaps his most relevant novel is the dystopian “Moscow 2042.” Published in emigration in 1986, the novel describes what we see today. Russia has been transformed from a Communist government into a quasi-theocratic state, where there is the same kind of harsh regime, only it’s not based on Marxist dogma but on the teachings of the Orthodox Church. It would appear that the novel has also been read in the Kremlin, which might explain why none of the country’s leaders have offered words of condolence on the writer’s death.

In emigration I met with Voinovich many times, whenever we were in the same country. Every time we met I was struck by his candor and easy manner. Sincerity and directness weren’t just Voinovich’s characteristics as a writer and public figure — that’s the way he was in person, too. There was no playing for the public. He said what he thought — always and with everyone. He responded to aggressive criticism with jokes, if he responded at all. As he said once at the end of the 1980s: “It’s great that two emigres will inevitably have three opinions. One of them will, by accident, turn out to be right. I agree with that one and pay no attention to the rest.”

Voinovich called himself an “unintentional dissident,” but, he said, “not in the sense that I was pushed into it, but in the sense that I simply didn’t fit into the existing regime.” He didn’t fit much better into the regime of the new Russia. Beginning in the 2000s, Voinovich frequently spoke out against attacks on the independent media, against the war in Chechnya and in defense of the unjustly imprisoned and persecuted.

Voinovich knew right from wrong; he called black — black and white — white; and he stuck to his principles no matter what the consequences. In life he was a kind of moral compass, and now that he is gone, we still have his works to find that moral due north.