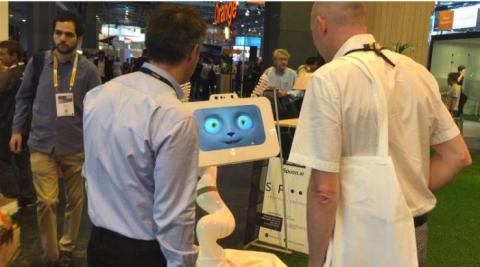 Some 50,000 people from around the globe have flocked to the second annual Viva Technology conference in Paris. They’ve come not just to see, but to experience cutting-edge innovation as presented by 5,000 tech start-ups inside the exhibition.

Newly-elected French President Emmanuel Macron was among the dignitaries attending the opening of VivaTech on Thursday, a conference which touts itself as a celebration of innovation built around the idea that meaningful relationships can happen between unlikely partners. VivaTech offers a forum for uniting dynamic start-ups with proven leaders like Google, Facebook, IBM and Sanofi, to name a few.

Nestled among the plethora of stalls is an area dedicated solely to Israeli developments. More than thirty Israeli companies are touting their wares at the Paris conference this year while working to further strengthen their connections in the global tech market. Israel has long self-styled itself as the "start-up nation," encouraging entrepreneurship especially in it's tech sector.

Vice President of Start-Up Nation Central, Jemekie Kletzkine, says Israel has established itself as a leader in innovation out of necessity. “I don’t think the recipe is a secret as much as the ingredients,” he says. “Necessity is the source of innovation. The 'start-up nation' is surrounded by a lot of countries that are not that friendly, so you have to change the way you work.”

Kletzkine points out that Israel is a country which began without easy access to water. “Today, Israel is recycling 85% of it’s water. Second in the world. Spain is at 20%”. He says innovation, for a young country like Israel, is the only solution. Kletzkine says at the core of Israel’s innovation is defense, with digital a close second. “You have about 400 cyber-security start-ups in Israel, but you also have 380 digital companies.” He says while the origins come from security, they’re now being applied in other domains.

Eyal Barzilay from cyber-security company WiseSec is living proof. The company's CelluSec solution is a location-based security policy enforcement system for smart mobile devices that prevents sensitive, restricted, or classified data leakage. Barzilay says he brings his knowledge and expertise from his time served in the Israeli Defense Force to his work. “Many of the leading players in the industry have actually emerged from dealing with this technological aspect in their service in the army,” he says. “You would see a lot of my co-soldiers heading up many of the prominent Israeli start-ups.”

Economically, Israel benefits greatly, with the start-up industry making up 50% of the country’s exports. Kletzkine cites the Israeli Autonomous Driving system, Mobileye, which was acquired by Intel Corp earlier this year in a 15.3 billion dollar exit from which the country enjoys a 30 per cent cut in taxes. For Israel's high-tech industry to further itself, Challengy Chief Innovations Officer Yossi Dan says partnerships with countries like France are necessary. “France is a fantastic engineering company. They are fantastic in the industrialization of the innovation. On the other side we do have Israel. They take risks, they are fast and they are fantastic in the initiation part of the innovation,” he says.

Dan adds that over the past 10 years there has been a shift in the relationship between Israel and France. “Big companies are interested in Israel and by the start-ups, not only to learn and copy the spirit, but also to do business and this is very, very new,” he says.

Israel's ambassador to France, Aliza Bin-Noun, says the turn out of Israeli companies at VivaTech, in the conference’s second year, is evidence of the interest Israel is garnering within the French market. “This is a very important element in the general relations between Israel and France, which are always in the process of getting stronger," she says. “This field has a very important role in strengthening the relationship between Israel and France.”