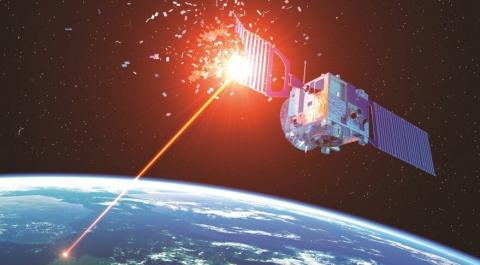 A ship in the Pacific Ocean carrying a high-power laser takes aim at a U.S. spy satellite, blinding its sensors and denying the United States critical eyes in the sky. This is one scenario that military officials and civilian leaders fear could lead to escalation and wider conflict as rival nations like China and Russia step up development and deployments of anti-satellite weapons.

If a satellite came under attack, depending on the circumstances, “the appropriate measures can be taken,” said Lt. Gen. John Shaw, deputy commander of U.S. Space Command.

The space battlefield is not science fiction and anti-satellite weapons are going to be a reality in future armed conflicts, Shaw said at the recent 36th Space Symposium in Colorado Springs.

U.S. Space Command is responsible for military operations in the space domain, which starts at the Kármán line, some 100 kilometers (62 miles) above the Earth’s surface. This puts Space Command in charge of protecting U.S. satellites from attacks and figuring out how to respond if hostile acts do occur.

Military space assets like satellites and ground systems typically have been considered “support” equipment that provide valuable services such as communications, navigation data and early warning of missile launches. But as the Pentagon has grown increasingly dependent on space, satellites are becoming strategic assets and coveted targets for adversaries.

“It is impossible to overstate the importance of space-based systems to national security,” Air Force Secretary Frank Kendall said in a keynote speech at the symposium.

Shaw noted that Gen. John Hyten, the vice chairman of the Joint Chiefs of Staff, “likes to talk about satellites as being ‘big fat juicy targets.’” “I agree with that,” said Shaw. “But how do we change that? How do we make it more difficult for a potential adversary to think they could succeed in depriving us of our space capabilities?”

Those questions are now being debated as Space Command develops what Shaw describes as “space warfighting doctrine.” A laser blinding a satellite is just an example of the types of attacks the U.S. has to prepare for, said Shaw. If that happened, the Defense Department would have to decide how to respond to that threat. Conceivably, naval or aerial forces would be called upon to take retaliatory action.

“[W]e are only starting to grapple with… what space warfighting really means,” Shaw said. U.S. in a ‘long-term strategic competition’

A competition for space dominance between the United States and rival powers China and Russia prompted the Trump administration and Congress in 2019 to re-establish U.S. Space Command — which had been deactivated since 2002 — and create the U.S. Space Force as an independent service branch.

Kendall, who was sworn in late July as the civilian leader of the Air Force and the Space Force, said the United States is in a “long-term strategic competition” with China. The implications for space are significant, he said, as “China has moved aggressively to weaponize space.”

The Space Force will invest in new capabilities to deter and win if deterrence fails, Kendall said. Any type of escalation can result in miscalculations and human errors which is why a space war is a “conflict that no one wants,” he said.

The U.S. military’s space weapons that presumably would deter China from firing the first shot against a satellite are classified. In a rare disclosure, the Space Force last year said it deployed an advanced ground-based communications jammer made by L3Harris that could be used as an “offensive weapon” to disrupt enemies’ satellite transmissions.

Chris Kubasik, L3Harris vice chairman and CEO, said there should be more awareness of the risks of an attack against a satellite precipitating a broader conflict.

“I think it’s the biggest threat facing our nation,” Kubasik said at the Space Symposium. A war in space would be “detrimental to society” because satellites play such a central role in everyday life for most people. “If you think of the impact of a war in space and how it impacts something as simple as our cellphones, navigation, supply chain, logistics, healthcare. I think it is a serious issue. And I think we have to continue to talk about it.”

Public awareness and education about the nation’s dependence on space are needed to help DoD “get the funding to make sure that we deter or defeat our adversaries in space,” he said.

Unlike conflicts on Earth, a space war is not easy to visualize. “I call it an invisible war with invisible hardware that people can’t see, it’s a little different than being here on the ground,” said Kubasik.

First shot could be against satcom

The military’s reliance on commercial satellites for communications makes these systems one of the most likely targets of enemy jammers and cyber disruptions, said Travis Langster, vice president and general manager of Comspoc, a company that monitors space traffic and tracks orbital activities.

“Given the plethora of commercial space, based on the observations and activities we’ve seen at Comspoc, the target of that first shot is likely to be a commercial satellite,” Langster said during a Space Symposium panel discussion. By launching an electronic or cyberattack against a commercial satellite that is used by DoD for military operations, an enemy would be “trying to send a very specific message” that it does not draw a line between commercial and military space assets.

The most likely scenario is a “reversible attack,” meaning some temporary loss of a space-based service, said Langster. “In this day and age, the first shot will likely be a cyberattack.”

“Jamming is occurring today; there’s obviously cyber attacks that are occurring across the infrastructure,” she said. And there have been many documented attempts to interfere with communications signals in war zones where U.S. forces operate.

But the question is whether these activities will escalate and lead to broader conflict. “I think the path to war in space is really based upon a space arms race, and we’ve been fortunate that we’ve been able to delay it up until this point, but it is perhaps imminent,” she added.

A key reason why the space race is accelerating is that technology is advancing so rapidly, Smith said. A second reason is the absence of “binding commitments on what the operating norms are going to be in space,” she said. “And without that, we’re very likely to have a space war.”

The only foundation of international space law that currently exists, the 1967 Outer Space Treaty, is outdated and doesn’t address most space security issues that could set off a war, Smith noted.

The treaty bans the stationing of weapons of mass destruction in outer space, prohibits military activities on celestial bodies and contains legally binding rules governing the peaceful exploration and use of space. But a new set of rules is needed for the current space age, Smith said. “We really haven’t addressed some of the very difficult questions. Can a nation tailgate another nation’s satellite? Is preemptive self defense going to be permissible? Are we going to ban any form of weapons in space?”

“Those types of reversible effects have already entered into the space layer, but I agree with Carrie Smith. It is the space race that is turning space into a warfighting domain,” said Backes. “What that looks like going forward definitely could be devastating to our commercial and international use of space.”

Experts point out that there are increasingly more ways to permanently or temporarily damage satellites so it would be virtually impossible for DoD to defend against a multitude of weapons. China and Russia, for example, have direct-ascent weapons that are launched on a sub-orbital trajectory to strike a satellite in orbit. They also have co-orbital weapons that are placed into orbit and then later maneuvered toward their intended target.

Additionally, China and Russia are deploying non-kinetic space weapons, according to the Center for Strategic and International Studies. These include lasers that can be used to temporarily dazzle or permanently blind sensors on satellites, and jamming devices that interfere with the communications to or from satellites by generating noise in the same radio frequencies.

In the face of these threats, the United States aims to make space networks more resilient by using a diversity of satellites in different orbits,complicating an adversary’s ability to launch an effective attack.

Kendall said resiliency “isn’t just about the individual satellite, it’s about the architecture.”

DoD’s Space Development Agency is looking to demonstrate what it hopes will be a more resilient space architecture. The agency is working to deploy a proliferated constellation of small satellites in low Earth orbit as an alternative to the traditional large, expensive spacecraft that DoD has traditionally flown in higher orbits but much smaller numbers.

“We’re getting away from ‘juicy targets’,” said SDA Director Derek Tournear. The idea of a proliferated architecture is to have enough satellites in orbit that “we can handle some attrition.”